Canadian UFO Has Many Baffled

It's a UFO. It’s a strange balloon. It’s a propeller-less drone. It’s a flying turtle. It’s an alien dumpling. Whatever it is, it was seen over Oshawa in Ontario last week and has defied identification.

Wildlife photographer Ken Rice claims he was taking photos in a marsh area near the General Motors of Canada headquarters at about 7:45 p.m. on June 17 when the object suddenly appeared in his field of vision.

“I was walking back to my car and I just saw something pop out of no where, way up high, far away in the sky. I thought it was a big turkey vulture so I just took a picture of it anyway and then it kind of hovered, sat there for a minute and then it took off.” 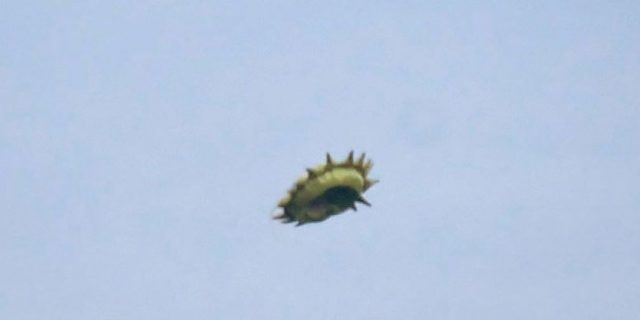 As is the case with many UFO sightings, Rice says he took a closer look at the photos at home and realized it wasn’t a turkey vulture but a … well, this experienced wildlife photographer couldn’t identify the object as anything he’d seen in nature. Thinking it was the ever-popular weather balloon, he scanned the Internet for balloons that might look like this UFO but claims he found none. That’s when he posted it for the UFO experts on the web to tell him what it is.

If the object is manmade, it doesn’t look like the kind of thing Oshawa would be proud of. This high tech city was once known as the "Automotive Capital of Canada" – the UFO was spotted over the headquarters of GM Canada – and is now the place to go in Canada for jobs in advanced manufacturing, health technology, logistics, energy and IT. The UFO doesn’t look like a promotional balloon or flying vehicle that GM would be using or testing and its shape is not something high tech drone designers would be proud of … even as a hoax. 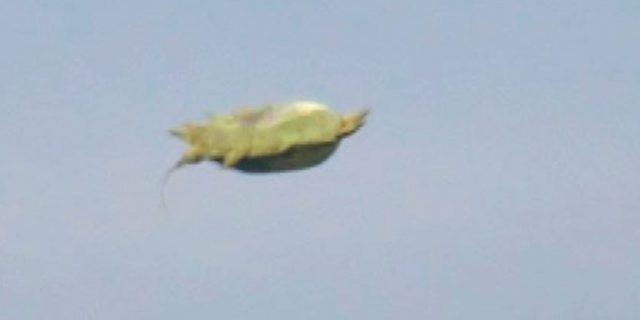 Speaking of hoax, could Ken Rice be perpetrating one? It’s hard to believe a “wildlife photographer” would mistake that floating spiked pillow for a turkey vulture and the sky doesn’t look dark enough to play tricks on a trained photographer’s eye. If he’s been out in the marshes long enough, he would certainly recognize it if it was a native creature. And, if he truly is an experienced camera guy, he’d know a bug or speck of pollen flying in front of his lens. Also, if he’s handy with photographic software, his CGI would be better, wouldn’t it?

The most common suggestion is that the object is a helium party balloon shaped like the sun or a sunflower. Rice vehemently disagrees with this.

“A balloon wouldn’t go that fast and disappear No. 1, and it was too high. Nobody would be flying a kite there because it’s just railroad tracks and the road and there was nobody around there. I didn’t see anybody, and where did it go?”

Unfortunately, he took photos and not a video.

Balloon? Drone? Tiny spaceship? Organic flying alien from the planet Turtlonia? What do you think?

A Menacing Old Man In Black