Quoth the Raven “I’ll be back!”

With apologies to both Edgar Allen Poe and James Cameron, the results of a new study on ravens show that Poe’s favorite talking bird acts more like a Terminator when wronged – holding grudges for up to two years against those who treat them unfairly. Can they fire a gun too?

The study, published in the journal Animal Behavior, involved researchers from the Lund University in Sweden and the University of Vienna in Austria where co-author Jorg Massen is a post-doc specializing in cognitive biology. Massen’s first job was hand-raising captive ravens for the project.

Once accustomed to humans, the birds were trained in the human arts of trading and deal-making. (Will this work with politicians? Asking for a friend.) Nine ravens participated in an exercise in trading. One trainer would give the bird a piece of bread. If the bird took it to the trainer at the other end of its cage, it was given a piece of cheese in exchange. 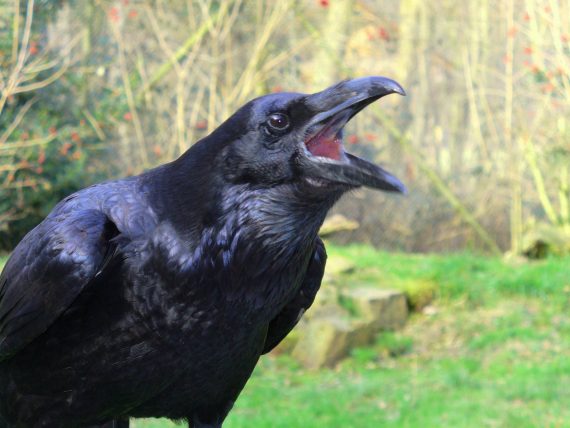 After that practice was learned, the trainers started messing around with the ravens. When approached by a bird bearing with bread, some trainers refused the trade and ate the cheese in front of the raven. Two days later, the trades were conducted again. In a test using seven of the birds, six went right to the “fair” trader who gave them cheese, one went to a neutral trainer and none went to the unscrupulous brie-eater. The test was conducted once again a month later with all nine birds. This time the results were 7-1-1 with the majority sticking with the fair dealer.

At this point, Alfred Hitchcock fans may be wondering if we’re in trouble. Can the ravens pass this judgmental trait on to others? Fortunately not. Ravens are recognized for having the most advanced bird brains (there’s today’s oxymoron) but the testers put a second raven in each cage as a trade observer and none of them learned by watching to identify the fair cheesemonger. If ravens can’t learn by watching each others, good luck with them training sparrows, parakeets and buzzards.

However, before you grab some cheese and crackers and go messing with the ravens and crows in your neighbor, Massen speculates that they can hold their grudges for up to two years, which is the amount of time that can remember other birds. In addition, ravens in the wild have been seen calling wolves to a carcass so that they rip the animal into smaller pieces that the birds can handle. Will the 911 operator believe you when you blame crows for that big dog biting you? Put down the Ritz and Roquefort and find another hobby.

The Mother Of All UFOs? Part-1