The boat’s crew pulled their net from the uncharted depths of the abyss. What they saw when they opened it would haunt them for the rest of their lives … it was a fish with no face!

The opening line of a new deep-sea horror novel? Worse … it’s a true story from Australia’s eastern abyss where researchers searching for marine life at depths of up to 4,000 meters (2.5 miles) found a strange faceless fish that has only been seen once before … by a research ship in the waters near Papua New Guinea … in 1873!

The modern-day scientists are part of Sampling the Abyss, a month-long voyage whose mission is to study the biodiversity of the abyss for the first time in history. The ship carrying 40 researchers departed from Bell Bay in Tasmania on May 15 will visit seven Commonwealth marine reserves from eastern Tasmania to the Coral Sea off central Queensland before landing in Brisbane on June 16. Dr. Tim O’Hara, Museums Victoria’s Senior Curator, Marine Invertebrates and Chief Scientist of Sampling the Abyss, explains why they’re there.

The abyss is the largest and deepest habitat on the planet, covering half the world’s oceans and one third of Australia’s territory, but it remains the most unexplored environment on Earth.

Yeah, yeah, yeah … what about the fish with no face?

The faceless fish was caught south of Sydney at a depth of 4 km. Measuring 40 cm (15.7 in) in length, Dr. O’Hara described it as “two rear-ends on a fish, really.” It’s technically not a new discovery, since records from scientists on the HMS Challenger research vessel show it caught a similar faceless fish in 1873. Its official name is a faceless cusk – the cusk is a North Atlantic cod-like fish in the ling family with a similar long slimy body … but it has a face.

Upon close examination, so does this one, says O’Hara. 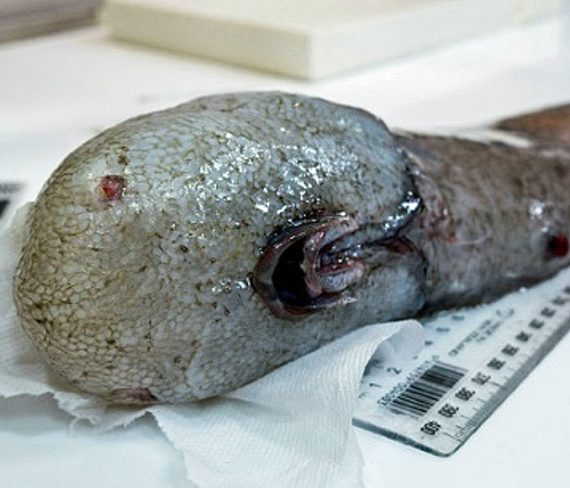 There goes the plot for Attack of the Faceless Fish from the Abyss! However, in addition to other strange and never-before-seen marine life, the researchers from CSIRO (Commonwealth Scientific and Industrial Research Organisation) found something even more horrifying 2.5 miles below the surface – tons of trash.

There’s a lot of debris, even from the old steam ship days when coal was tossed overboard. We’ve seen PVC pipes and we’ve trawled up cans of paints. It’s quite amazing. We’re in the middle of nowhere and still the sea floor has 200 years of rubbish on it.

“Amazing” is not the first word we should use to describe 200 years of trash piled on the ocean floor. What’s amazing is that the faceless fish and its friends have managed to survive despite it.

But for how much longer?