In 2015, Helena Morais, a professor at São Paulo State University's Institute of Geosciences & Exact Sciences, discovered Asteroid 2015 BZ509, affectionately known among astronomers as Bee-Zed, in 2015 after predicting its existence two years before. However, she could not confirm the unbelievable idea that the asteroid was in a retrograde co-orbit with Jupiter. 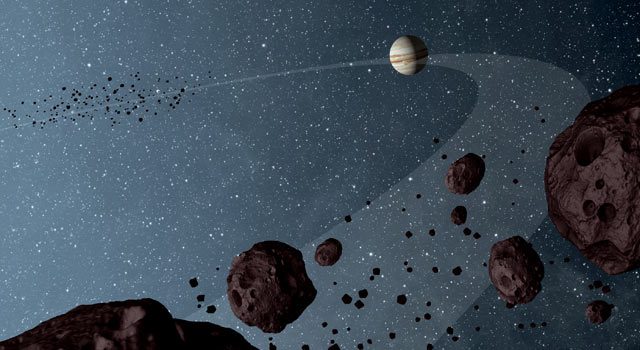 Enter Paul Wiegert, an astronomer at the University of Western Ontario, Canada. Using Morais’ data collected via the Panoramic Survey Telescope & Rapid Response System (Pan-STARRS) in Hawaii, Wiegert was able to find and track Bee-Zed with the Large Binocular Telescope in Arizona. In his paper published in the journal Nature, Wiegert not only confirms the retrograde orbit but explains how Bee-Zed and Jupiter avoid colliding.

The asteroid and planet are in a dance called co-orbital resonance. Jupiter is in a near-perfect circular orbit of the sun while Bee-Zed’s is elliptical, crossing paths with Jupiter every six years. Each body’s gravitational pull on the other has locked them into this stable resonance and kept them from coming more than 176 million kilometers (109 million miles) of each other.

Morais was so excited that her wrong-way asteroid was finally believable, she and Fathi Namouni at the Côte d'Azur Observatory in France published a simultaneous paper in Nature with her general theory on how retrograde co-orbitals and retrograde orbital resonance are created. It started with the creation of the Oort cloud of comets and debris at the end of planet formation in the solar system.

"At these distances, the Milky Way's gravitational effects disturb small bodies. To begin with, they orbited close to the plane of the ecliptic in the same direction as the planets, but their orbits were deformed by the galaxy's tidal force and by interactions with nearby stars, gradually becoming more inclined and forming a more or less spherical reservoir."

These bodies could stay in their retrograde orbits until disturbed, which would push them back into a prograde orbit. The mystery of Bee-Zed is how it managed to avoid getting disturbed for millions of years. Its existence means there may be more wrong-way asteroids like it in Jupiter’s orbit and beyond.