Throughout the 1970s and 80s, a rash of strange livestock deaths that were occurring on farmland in the American midwest had many ranchers concerned. One hallmark of the deaths were strange mutilations, often described as having been carried out "with surgical precision," and seemingly indicative of the intentional removal of soft organs and other portions of the dead animals.

Thus the phenomenon known today as "cattle mutilations" was born, despite the fact that the earliest incident involving such anomalous bovine deaths was actually attributed to a horse.

There may, however, be a new kind of mutilation on the rise. Paul Seaburn reported last month for Mysterious Universe that researchers near Cape Town, South Africa, have noted several unusual great white shark killings, where the victims were found to have been "neatly" killed, with nothing but the liver having been removed in the process. In at least some of the incidents, no other portions of the sharks were attacked or damaged.

So are aliens abducting great white sharks and removing their livers now? Actually, no... unless you consider orcas to be aliens, that is.

However, now researchers out of Cape Town have reported what is believed to be the fourth in this series of great white shark killings. As with each of the previous incidents, one key organ -- the liver -- was removed, which researchers again say was taken "with surgical precision." 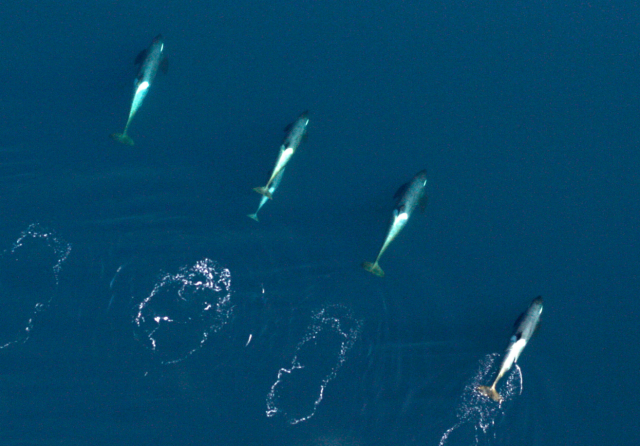 Above: A pod of killer whales on the hunt.

Paul's initial report discussed an incident in early May, where a massive, 15-foot shark weighing nearly one ton had washed ashore near Gansbaai. The very next day, a slightly smaller shark also appeared, with similar "surgical" wounds.

The attacks are believed to be targeted, with pods of killer whales attacking the sharks with the specific intent of removing, and presumably devouring the squalene-rich shark livers.

Analysis of the shark remains appears to show strong indicators of attack by killer whales, according to researchers with Marine Dynamics, a conservation organization operating near Cape Town. While "surgical precision" (in the researcher's own words) may have been observed in nearly every one of the deadly liver-extractions, this has everything to do with killer whales having a penchant for this particular body part, and what it contains.

The shark livers are very high in squalene, a substance derived from oils in the shark's liver, and named after the Squalus genus of sharks. A variety of plants also produce the substance, which is primarily used in a variety of cosmetic products today.

The Daily Mail reported of the most recent killing that, "Pods of killer whales were spotted around Gansbaai at the time the three great whites were killed in May and around Dangerpoint when the fourth great white was killed this week."

Orcas are notorious for their intelligence. In recent weeks, we reported here at Mysterious Universe that attacks by orcas on fishing boats on the Alaskan coast appear to be on the rise. Elsewhere, some news outlets reporting on the great white shark deaths at the hands of the predatory orcas have likened the incidents to "serial killings", while others have compared the bizarre slayings to something out of a horror movie.

Hey, we had Jaws... maybe it's about time we had a good thriller about orcas who go on the attack!