If you’re looking for a new head or a new body or just a great story to turn into either a life-changing documentary or a terrifying horror story, you’re probably familiar with the name “Sergio Canavero.” He’s the Italian neurosurgeon who announced two years ago that he would perform the world’s first head transplant in 2017. Due to circumstances beyond his control – little things like finding a country that will allow him to perform the surgery on humans and finding a head and body that match in ethnicities – he recently announced he’s had to move the location of the planned transplant to China, which forced him to break the news to his first volunteer that the man’s Russian head will have difficulty finding a Russian body to connect to there and his head must roll to the end of the line.

This week, in a paper published in CNS Neuroscience and Therapeutics, Dr. Canavero announced that he’s making progress towards his meeting his 2017 target date by successfully reattaching severed spinal cords in rats using a secret concoction he calls “glue.” Really! Actually, there nothing secret about it. Canavero used polyethylene glycol (PEG), a versatile plastic that is known to have binding properties. 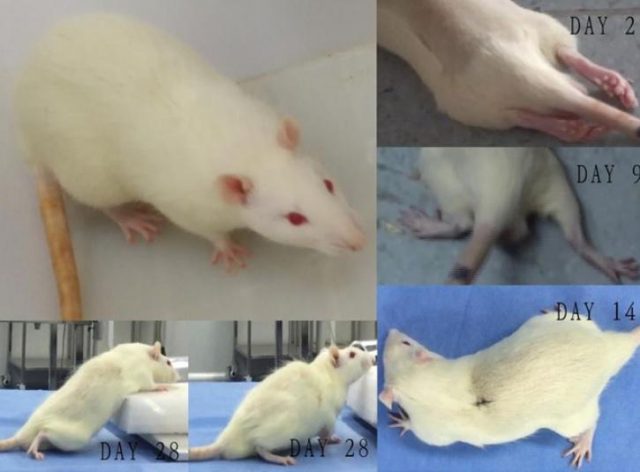 According to the report, Canavero and his team severed the spinal cords of fifteen lab rats. Six unlucky control rats got saline solution poured on their cut spinal cords while the other nine were injected with PEG. One of the saline rats died but the rest survived. As expected, the saline rats were unable to walk. However, the report states that the PEG rats regained some ability to move their legs and were able to walk or limp around a month after the surgery.

Success? That depends on your definition. Also after a month, all of the rats were dead.

Canavero says his goal in the experiment was not to keep the rats alive but to prove that the PEG glue worked. That it seemed to do, but there’s doubt as to how. According to Newsweek, Dr. Jerry Silver, Professor of Neurosciences at Case Western Reserve University in Ohio, reviewed the study and pointed out that it appears the team did not sever the rat spinal cords completely through, leaving some parts connected. Also, he says the study didn’t show that the nerves had grown back together. He believes that a month is not long enough for the nerves in the cut parts to fuse correctly and the rats should have been placed in induced comas to allow long-term healing before testing their abilities to move their limbs or walk again.

Dr. Canavero says Dr. Silver was merely “unfamiliar” with the what his team accomplished (isn’t that the purpose of the report?) and should “stop criticizing those who do better” because “we have been amazed ourselves.”

Before going any further in this quest to perform the world’s first head transplant by the end of 2017, we’d like to hear from the rats.