First it was Hillary Clinton and John Podesta talking about releasing the government files on UFOs if she became president. This week, it was revealed that Russian government official met with American UFO lobbyist Steve Bassett to discuss appealing to President Vladimir Putin to release that country’s secret UFO files. Putin himself made a strange reference to ‘men in black’ duing an interview with a French newspaper. Now we have the appearance of a mysterious video of Iranian President Hassan Rouhani discussing a UFO encounter he had as a young boy. Is this a trend? Is UFO and alien disclosure coming sooner than we imagined or even hoped for?

The video was uploaded on June 1 by YouTube user Behzad GH and has no indications of when it was recorded or where. President Rouhani says the UFO encounter occurred when he was in elementary school, grade 3, when he was 7 or 8 years old. Since he was born in 1948, that would make the year 1955 or 1956. The location was most likely Sorkheh in Semnan Province where he grew up. Rouhani says it was at the dawn of a Ramadan month, so that would put his sighting somewhere around April 24, 1955, or April 12, 1956, according to the Islamic calendar for those years. He describes it as “cuboid” up to 3 meters per side and shining a bright light over a mosque.

The president says the UFO landed and he thought it looked like a “howdah” – those carriages put on the backs of elephants by the wealthy as a method of transportation. He claims he saw someone inside it but could not identify them before the UFO lifted back into space. Rouhani claimed to follow it for 200-300 meters until it descended onto another mosque, but remained there only briefly before ascending again and disappearing. He admits not knowing what it was but assures it was not a hallucination or a dream and says it was a “special moment” in his life.

What was the cuboid UFO President Hassan Rouhani saw in Iran in his youth? There aren’t many records of UFO sightings in Iran in those years. The most famous Iranian UFO sighting was the 1976 Tehran UFO Incident when two F-4 fighter jets chased a UFO before suffering mechanical failures, an incident that was well documented in a U.S. Defense Intelligence Agency report and has never been adequately explained. That UFO was much larger than the one Rouhani described. The 2004 Iran UFO sighting was a mass sighting most investigators believe was a surveillance plane or Venus. There was no landing as in the case of Rouhani’s UFO.

A more recent incident reported in mid January 2017 allegedly involved the Iranian military firing at glowing orbs over Tehran before fighter planes arrived to find nothing … or at least that’s the ‘official’ report. 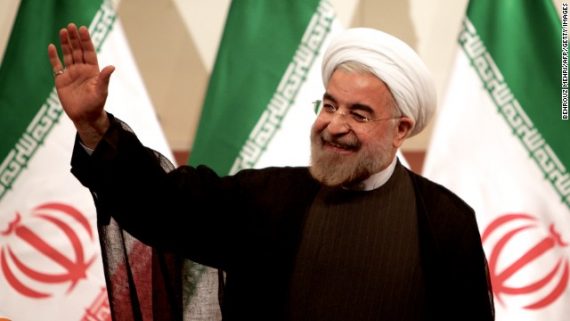 President Rouhani is a lawyer, academic and cleric. It’s unlikely he would lie about seeing a UFO. Is the video a hoax? It’s possible. Is Rouhani joining the ranks of world leaders who seem to be heading towards UFO and alien disclosure? That’s possible too, although one mysterious video isn’t much evidence. An interview on the subject would be nice.

Anyone interested in heading to Tehran to convince the president to talk UFOs?