Message in a Bottle: The Curious Adventures of Correspondences Lost For Decades

The year was 1946; the location was the New Grand Hotel, Yokohama harbor, Japan. Living in the room next door was General Douglas MacArthur, supreme commander of the Allied powers at the end of World War II, and thus, also de facto ruler of Japan at the time.

The man in rooms 316-317 was Lt. Col. Eugene J. McNamara, a man who might have remained relatively unknown to history, even despite being General MacArthur's neighbor, had it not been for an unusual game, of sorts, that McNamara decided to play.

Similar to the old "message in the bottle", where a note is dropped inside a bottle, then capped and tossed to the sea with hope that someone, somewhere, some time will eventually find it, McNamara took an empty whisky bottle, and turning over a business card, wrote on the blank side the following message:

The message, like many notes dropped into bottles, would not be discovered again for years.

Finally, in 2016 during renovations at the hotel following a series of earthquakes in the region, workers found the vintage bottle (sans any vintage whisky), with the little slip of paper inside.

The curious little note eventually made its way to Keisuke Ohta, a manager at the hotel. “A series of miracles led to the bottle being here today,” he said, marveling at how it hadn't simply been mistaken for trash, and thrown away in the midst of the ongoing renovations.

One of the earliest historical references to messages within bottles dates back to 310 BC, where Greek philosopher and scientist Theophrastus is believed to have employed this form of communication in order to show that the Atlantic Ocean was the ultimate source for the formation of the Mediterranean Sea. The idea has also been a popular trope in fiction, with notable instances including American author Edgar Allan Poe's 1883 short story, "MS. Found in a Bottle", in addition to a film of the same name, and the popular 1980s song by The Police.

There have been other notable instances where real life coincidences have arisen from messages found in bottles. Of course, among the most famous and oft-associated themes pertaining to this curious form of communication have been the famous romances associated with them.

For instance, just months before Eugene McNamara took to hiding his message in a bottle among the interior beams of Yokohama’s New Grand Hotel, on Christmas Day, 1945, 21-year-old Frank Hayostek, a medical corpsman was sailing aboard the ship Liberty. As New York Harbor approached in the distance, Hayostek took an aspirin bottle and, stuffing it with messages, tossed it into the ocean. 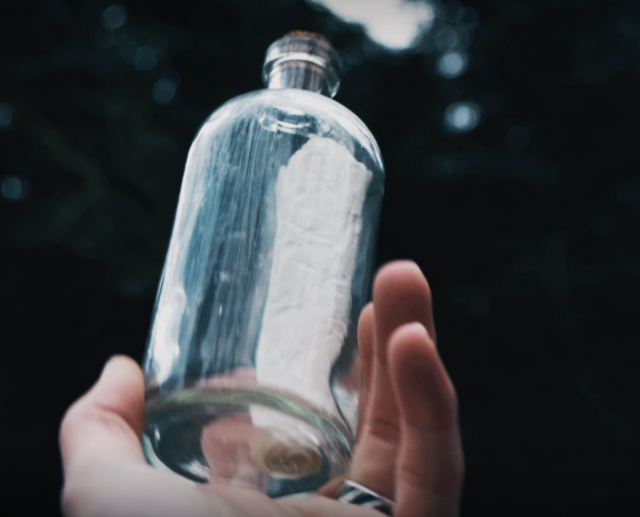 Eight months later, Breda O’Sullivan, a young Irish milkmaid, discovered Hayostek’s bottle near Dingle, Ireland, and decided to write back. In August, 1946, shortly after discovering the bottle, she sent him a letter which read:

"I have found your bottle and note. I will just tell you the whole story. I live on a farm at the southwest coast of Ireland. On Friday, Aug. 23, 1946, I drove the cows to the fields beside the sea and then went for a walk on the strand called 'The Beal.' It is an inlet of Dingle Bay.

"Well, my dog was running before me and I saw him stop and sniff something light on the sand, and then he went off in pursuit of sea gulls. I found the object was a brown bottle . . . The cork . . . crumpled in my fingers. How the note kept dry, nobody can understand. It must have been because you mentioned God's name on it, and He brought it to safe harbor . . . I sat there on the beach and read it.

"I thought at first I was dreaming. This is just a little common Irish village where nothing strange ever occurs, and this is something for the farmers to talk about while they cut the oats and bring the hay into the barn. Well, imagine, the bottle has been on the sea for eight months . . . Who knows where it has been? It may have traveled around the world. How did it escape being broken on the rocks? If you had only seen where I got it! It's all a mess of rocks. The hand of Providence must surely have guided it.

"Well, I hope to hear from you soon . . . You mention offering no reward to the finder of the bottle. Well, I ask no reward, as it was a very pleasant surprise. Wishing you very good luck, your loving friend,

Needless to say, a correspondence ensued, and to much fanfare from the press. By 1952, Hayostek managed to save enough money to cover his travel expenses, and he made the trans-Atlantic journey to meet his Irish pen pal. They visited for two weeks, and despite the ever watchful eye of the press, the widely promoted “romance” ended up remaining a long-distance friendship, and that was all, as reported by TIME Magazine in the August 18, 1952 edition:

Inevitably, they went off to kiss the Blarney Stone together. But then, while hundreds of pencils, typewriters and teletypes poised to write the happy ending, they ended the suspense.

Somehow, it was as if the glass slipper in the Prince's hand was too small for Cinderella.

Their correspondence continued until 1959, at which time both of the pen pals finally married to spouses in their respective countries of residence.

Still other famous “message in a bottle” stories have proven more successful at match making. In 1956, while the famous Hayostek/O’Sullivan correspondences were still very much underway, a Swedish sailor with the decidedly epic name of "Ake Viking" posted a message in a bottle, which read simply, “To Someone Beautiful and Far Away.” His message ended up in the hands of 17-year-old Paolina, a young Sicilian girl who, writing back to Mr. Viking, instigated a correspondence that led to their eventual marriage. 4000 guests and curiosity-seekers attended their widely publicized marriage.

However, what many have argued over the years to be “the most famous message in a bottle love story,” fishermen working along the Essex coast pulled up a green bottle in their nets, which held an 84-year-old letter dated September 9, 1914, penned by a British soldier named Thomas Hughes. It had been written just days before his death on the battlefield in France. Although his wife had already died by the time the letter was found, the message was delivered to his daughter, who by this time was 86-years-old and living in New Zealand, by the same fisherman who removed the ginger beer bottle from his company's nets.

For all such reasons outlined here, the message in the bottle will no doubt remain one of the most time-honored, if not altogether curious methods of communication in the history of humankind. And sometimes, they make for damned good stories too, don't they?

The Sun May Have Once Had an Evil Twin