I had the weirdest experience walking in the Preseli mountains yesterday which I thought I'd share. I regularly go for walks in the hills but yesterday was a walk I'll not forget in a hurry!

Thus begins the story told by Nicholas Pentecost, who reportedly was on a walk in the mystical Preseli mountains of Pembrokeshire in Wales on the last Saturday of May 2017 when he saw something he says “I’ll not forget in a hurry!” … and neither will anyone else since he managed to capture a few photographs.

As I reached the summit of Carn Goedog, I noticed in the distance this outline of a sort of feral looking man walking around completely naked. I managed to take a few photos (you do have to zoom in but it's pretty unmistakable), but then I think he noticed me but I'm not sure because he was looking at the ground it seemed kind of slightly hunched. 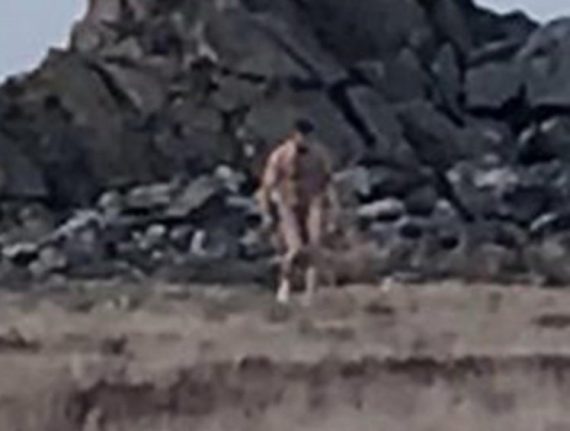 Hmm. Pentecost was (presumably) wearing clothing and armed with at least a cell phone and possibly a walking stick, so perhaps his next move might have been to see if the “feral man” needed help. However, this occurred in the Preseli mountains – possible source of the bluestones used to build the inner circle of Stonehenge and definite source of the stones used to erect dozens of stone circles, henges, standing stones, hill forts, hut circles and other prehistoric sites across Pembrokeshire. As a result, myths and legends abound in these hills, causing visitors and residents alike to periodically and fearfully look over their shoulders … including Nicholas Pentecost.

I couldn't hear if he was trying to talk to me or if he was just making sounds it was difficult to hear with the wind but I didn't stick around to find out and legged it back to the car.

Perhaps that was the right decision, although Pentecost admits he watched the man for 25 minutes before finally running away (that sounds a little perverted, doesn’t it?). While stories of feral children raised by wolves, dogs, apes, bears, sheep, cows and other animals are common, albeit generally unproven, tales of feral adults are rare and usually attributed to mental illness, addiction or some other affliction. However, the Preseli mountains also have something else that could be the reason for this feral man – nudists and other free spirits. 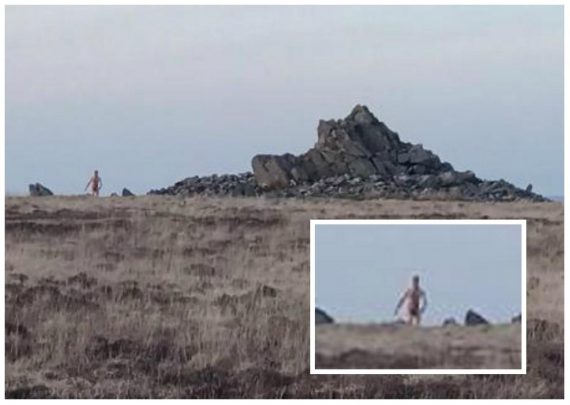 While many commented in the news stories that this could have been a nude walker, something rare but not unheard of in Wales (would this be considered a tourist attraction or distraction?), he could also have been a free spirit like those living secretly in a Preseli eco-village for years before being discovered and eventually allowed to stay.

As of this writing and despite Nicholas Pentecost’s request for anyone else seeing the so-called feral man to come forward, there seem to be no other reports. Let’s hope he either received the treatment he needed, got his tan and put his clothes back on or returned to his job at the eco-village making compost out of Welsh vegetation.

And if he truly is a feral man, let’s hope he knows how to deal with alien big cats.

The Curious Case of Phineas Gage