Mysterious Planet May Be Messing With the Kuiper Belt

If there’s one thing we’ve learned from the history of mass extinctions, rogue asteroids are not good for the planet. That’s why the latest news from the Kuiper asteroid belt is disconcerting at best, apocalyptically frightening at worst. A group of astronomers has uncovered evidence that a warp in this asteroid belt beyond Neptune is being caused by a mysterious small planet hiding inside it. Is this Planet X? Planet 10? Planet 9? Will we decide on a name before it wipes us out?

“The most likely explanation for our results is that there is some unseen mass. According to our calculations, something as massive as Mars would be needed to cause the warp that we measured.”

According to their new report in the Astronomical Journal, scientists Kat Volk and Renu Malhotra from the University of Arizona’s Lunar and Planetary Laboratory have discovered a strange warp in the solar system’s plane. While the planets and most other space objects orbiting the sun are predictably planar, things can get unpredictable at 55 astronomical units (55 AU is 55 times the distance of Earth from the sun) in the area filled with Kuiper Belt Objects. Volk and Malhotra say they’ve found a section that has an 8 degree tilt away from where models say it should be. That can mean only one thing. 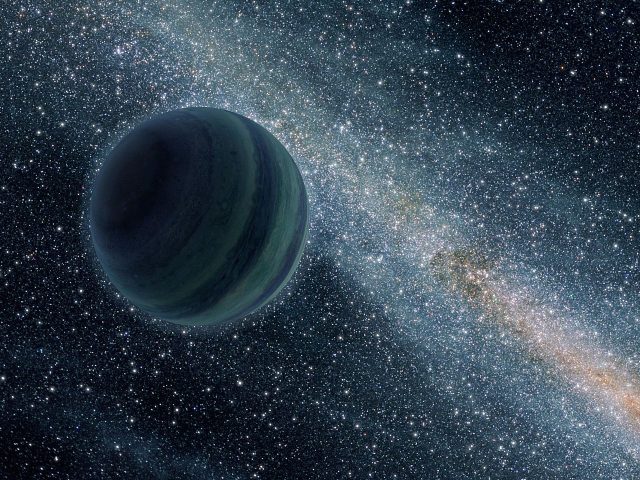 No, not aliens. The Kuiper Belt is being warped by an object large enough to have a belt-bending gravitational pull. Volk and Malhotra determined that a tilt away from the norm of that magnitude could be caused by an object whose mass is somewhere between that of Mars and Earth, making it a planet. Is it Planet X, Dr, Volk?

"The observed distant KBOs are concentrated in a ring about 30 AU wide and would feel the gravity of such a planetary mass object over time, so hypothesizing one planetary mass to cause the observed warp is not unreasonable across that distance."

Volk prefers to refer to the warp-inducer as a “planetary mass object” for now and casts doubt on it being the rumored Planet X because it’s too close to the sun – Planet X, if it exists, is predicted to be more like 500 to 700 AU from the center of the solar system. If it’s not Planet X but it’s at least the size of Mars, why hasn’t any telescope picked it up?

"The chance that we have not found such an object of the right brightness and distance simply because of the limitations of the surveys is estimated to be to about 30 percent.”

In other words, it’s possibly in front of a dense cluster of stars whose brightness overwhelms it, causing astronomers using today’s telescopes to simply avoid wasting their time (and burning their retinas) staring at the spot. That could change with new data from the Outer Solar System Origins Survey, which is tracking and recording the thousands of objects beyond Neptune. Or it could be seen by the Large Synoptic Survey Telescope which is scheduled to be operational in 2020.

Will that be enough time to protect us from rogue asteroids knocked towards us by this belt-warping new planet with no name?