Nessie Appears in Two Different Places at the Same Time

Can a fabled lake monster be in two places at once? Does Nessie have an albino Russian doppelganger? These questions and more arose like a sea monster out of its watery abyss as photographs popped up on the Internet of what appear to be two different lake creatures, one in the usual Loch Ness in Scotland and one in Siberia’s Lake Khanto.

The sighting in Scotland on June 22 is good news for area businesses since it’s only the second one in 2017. Peter Jackson and Phillippa Wearne of Sydney, Australia, claim that saw something gliding in the water of the loch as they drove past and managed to stop and record in on a smartphone.

"It seemed to be moving fast but in the direction of the current. We were dumbfounded but excited. We just thought ‘wow, what is it?’ It has been a childhood dream to come here.” 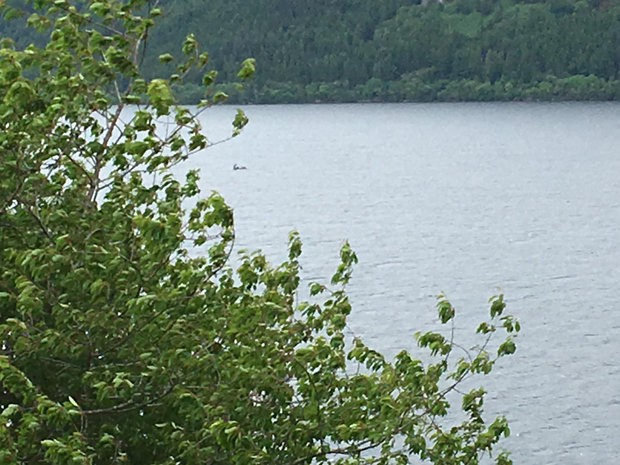 The couple shared their lifelong fantasy until whatever it was disappeared, and then they took the video to Gary Campbell, registrar of sightings at Loch Ness, who gave it his official review.

“With regard to Peter’s pictures, as with pretty much all Nessie photos, they are just that little bit indistinct.”

Poor Gary must have thousands of euphemisms for “it looks like a log.” He should write them up and email them to his counterpart in Siberia. Just a few days after the Loch Ness sighting, Dmitry Kim claimed he was jogging on the shore of Lake Khanto in Noyabrsk, a small city in the oil fields of north-central Siberia, when he saw the neck and body of something strange. Fortunately, he was carrying his phone and took a picture.

We pause now to contemplate on why people who see strange things like this take only one picture of them.

It appears he uploaded it to social media with his view on what it might be (rough translation):

“I know that this is impossible, though a conformation of this quadruped reminded me of a Loch Ness monster. It was station there and wasn’t moving.”

And for those who noticed that this “quadruped” (how did he know that it has four legs if it never moved out of the water?) is very white, Dmitry apparently pointed out that the lake was once rumored to be home to very cold swans, but this “quadruped” was much larger than a swan and looked nothing like one anyway.

There seem to be no other witnesses and, as Gary Campbell lamented just a few days before, the photo is a “little bit indistinct.”

The are plenty of rumors of lake monsters in Siberia and it’s nice to get a photo for a change, but this one doesn’t move the needle any closer to “Siberia has a Nessie!” A white tree stump? Maybe. As for the latest sighting at Loch Ness, no one will be buying little stuffed animals shaped like the “indistinct” blob in the video. Those moving currents play tricks on perception at great distances.