Something is causing quite a stink in Siberia right now.

More specifically, a group of school children in the Yakutia region were recently alerted to the presence of an ancient deceased creature, believed to date back to the last Ice Age, by the stench of its remains.

The question remains, however, as to precisely what this creature was when it was alive.

The remains were revealed recently as a result of steadily thawing layers of permafrost, which revealed the skull, portions of the torso, and other parts of the creature’s body, which will be studied by scientists in the coming days.

At present, the discovery is believed to be as much as 25,000 years old.

Among the leading theories about what the creature might be, some have suggested that the remains resemble a wooly rhinoceros (Coelodonta antiquitatis), a Pleistocene megafaunal variety that was predominant during the last glacial period. The species lived mostly in parts of Europe and Asia. 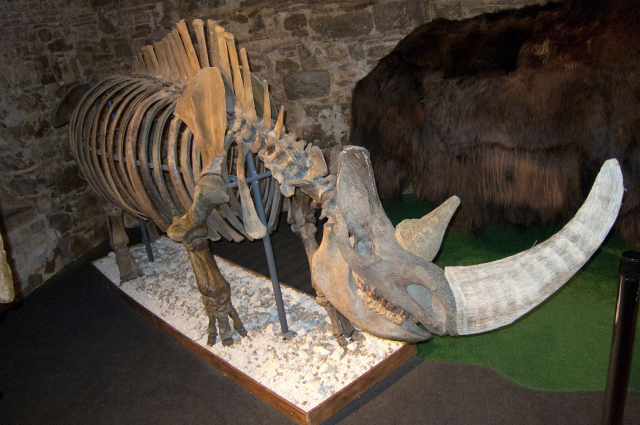 The remains of the creature--and its unpleasant odor--were revealed as the region's permafrost began to thaw coinciding with spring.

The soon to be identified remains of extinct megafauna aren't the only things that can be released from soil as it thaws in such regions. Last August, an incident occurred which involved thawing of the Siberian tundra, which led to sickness and death. In the Yamal Penninsula, a 12-year-old boy was reportedly exposed to the thawed remains of a reindeer which had been infected with anthrax more than 75 years earlier.

The creature’s remains, and the deadly anthrax within, were later exposed, and portions of the infectious bacterium were washed into the soil and, eventually, the water nearby. Thousands of reindeer in the region were infected, and in turn, at least a handful of humans as well.

As global temperatures continue to rise as a result of climate changes, many experts worry about the potential for potentially deadly viruses and bacteria--some which could be thousands of years old, if not even older--to be released into the modern world. A 2016 BBC report featured the opinion of Jean-Michel Claverie, a biologist with Aix-Marseille University in France, who said:

"Permafrost is a very good preserver of microbes and viruses, because it is cold, there is no oxygen, and it is dark. Pathogenic viruses that can infect humans or animals might be preserved in old permafrost layers, including some that have caused global epidemics in the past."

While the realistic potential for dangers lurking below the ice remains, there may be discoveries of greater benefit to scientists that turn up from time to time, as well. Ongoing efforts to extract usable material samples from extinct megafaunal remains, which include the wooly mammoth and other large ancient species, aim to study the possibility of reviving these creatures, so that they may brought back from extinction, and studied by scientists in modern settings.

With time, we will learn just what kinds of organisms have been preserved in the frozen terrain of the ancient world; one which may hold thousands of years worth of secrets, marvels, and possible dangers.