Sick: “Serial Killer of Cats” Believed to Have Poisoned 200 Felines in Southwestern France

It appears there may be a serial killer on the loose in southwestern France.

A mass-murderer of cats, that is.

Over the last several weeks, residents of Saint-Pierre-la-Mer, a seaside resort town on France's southwestern coast, have been on edge following the death of an unprecedented number of local pets, nearly all of which were house cats. Many of the bodies that have been recovered possessed a curious blue coloration to the tongue, with further reports that some of the cats had vomited a bluish colored substance.

The Telegraph reported that, "on one small area leading to the beachfront, some 50 lifeless felines were picked up in the past week alone."

One local cat owner the Telegraph identified as "Stéphanie" said her cat, Sylvestre, had been among the casualties, and that the animals she had seen, "were sicking up something blue, they were meowing and dying."

Authorities investigating the strange rash of feline deaths believe that poison may have been involved, and that as many as two hundred animals are believed to have been harmed. According to the Times, this "serial poisoner" probably used a variety of substances, ranging from "lead shotgun pellets, coolant liquid and cannabis", which were hidden in food. A similar rash of poisonings reportedly occurred in the region just a few years ago.

Last year, an ABC News article featured an interactive map documenting several instances of mysterious mass animal deaths. Some could be explained by natural causes, as well as a number believed to have been caused by human action, though without any nefarious intent; for instance, scores of birds killed coinciding with fireworks launches.

However, some of the mass animal deaths remain unexplained, with no discernible causes for what led to large numbers of a single species to have suddenly died. During the winter of 2010 and 2011, an unprecedented amount of media attention was given to a series of mass animal deaths occurring near Beebe, Arkansas. Toward the end of December, an estimated 83,000 drum fish washed up along the Arkansas River, the alleged victims of some variety of disease. Shortly thereafter, on New Year’s Eve as many as 5,000 red-winged blackbirds fell from the sky in the same area. Strangely, a similar rash of bird deaths would occur in Beebe one year later on the anniversary of this mass-death incident (hence why some have suggested fireworks as the cause).

The phenomenon was reported elsewhere during the 2010-2011 "Aflockalypse", as some in the press jokingly called the incidents. In January, mass bird deaths were reported in other parts of the United States, as well as in Europe and South America. 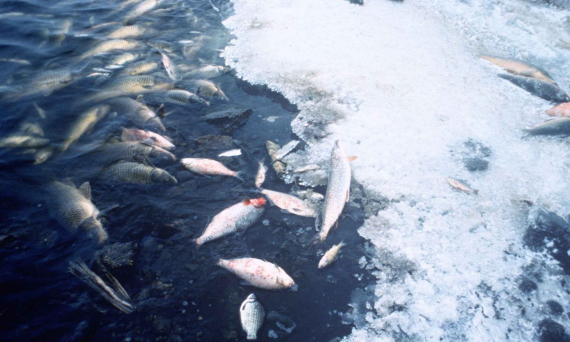 However, birds and fish weren't the only animals that turned up dead in large numbers, and under mysterious circumstances. On January 18, 2011, close to 200 cows were found dead by their owner in a field in Wisconsin.

Time reported on the bizarre incident, quoting the owner who believed the animals died of a sudden illness:

The owner, whose name has been withheld by authorities, told deputies that he suspected the animals died of IBR (infectious bovine rhinotracheitis), a respiratory condition, or BVD (bovine virus diarrhea), an illness that can damage a cow’s digestive and immune systems, lead to pneumonia and kill unborn calves. Authorities have sent samples from the cow corpses to Madison to determine the exact cause of death.

Not everyone was convinced that illness had caused the deaths (at the time various media outlets were initially reporting on the incident, test results had not yet confirmed whether disease had killed the animals). Some, taking a more apocalyptical attitude, believed the mass animal deaths were tantamount to biblical prophecy, and feared the end of the world would soon follow.

A wide range of explanations do exist, ranging from the onset of communicable disease that may spread quickly among species that exist in large groups (like birds and fishes do). Geomagnetic anomalies, often resulting from solar flares, have also been attributed to disorientation in creatures that rely on magneto-reception as a directional guide during travel or migration in large numbers. With birds, the result can be that such disorientation leads them to fly to unsafe altitudes, where they suffer hypoxia due to lack of oxygen, and after passing out, fall to the ground.

So fortunately, not all instances where mass animal deaths occur involve a mass murderer... although in France, authorities remain on the lookout for the presumed killer of cats, who is believed to still be afoot in Saint-Pierre-la-Mer.