The “Other” Rendlesham Forest UFO Encounters

The December 1980 events in Rendlesham Forest, Suffolk, England are seen by many UFO researchers as prime evidence for the existence of extraterrestrials in our midst. Far less attention, however, is paid to other seldom discussed cases which occurred in the direct vicinity of the forest. Two such cases - also from the 1980s - are worth noting. It was in the autumn of 1983 - specifically late October - when the people of the very nearby village of Hollesley collectively found themselves in an extremely strange situation.

Witnesses in the village described seeing - late at night - a large, dark-colored, silent, triangular-shaped aircraft which hovered over Hollesley for around a quarter of an hour. Three powerful lights were seen below the UFO, all of which lit up the ground in spectacular fashion. Of the many and various people who saw the strange craft, one was Ron Macro. He told the media, who were soon onto the story: "We froze. The lights were in a triangle and remained perfectly still. Whatever was in the sky flew over us. The lights beamed down and we heard a high-pitched whine." 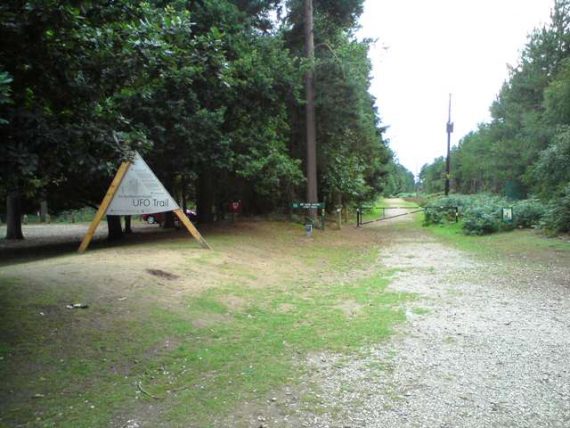 Other witnesses came forward, including Pauline Osborne and Debbie Foreman. They were driving by Hollesley at the time the UFO put in its appearance and were lucky enough to see it at fairly close quarters. It was as they got closer to the object that something very strange happened: the engine of Debbie's car began to splutter and malfunction. The headlights dimmed and, finally, the engine briefly cut out completely. Debbie said: "Until then the car had behaved quite normally. But everything seemed to go wrong." Those familiar with the history of Ufology will know that so-called "vehicle interference" cases are not uncommon within the subject.

Not surprisingly, the people of Hollesley insisted that a spokesperson from the close by Royal Air Force Woodbridge base give them an explanation. One of those who wanted an answer was John Button. He gave his views to the media: "If they are experimenting then we ought to be told. And if there's something flying around here which comes from outer space, we ought to be told about that too."

A noticeably brief reply came from Captain Kathleen McCollom, who would only say: "Nothing was seen on radar. I cannot say more than that."

Ten months later, there occurred yet another encounter, this time over Rendlesham Forest itself. The crew of a Britten-Norman Trislander freight aircraft had a collision with...well...with something. Luckily, the damage was not too severe. But, it was certainly bad enough. The U.K.'s Civil Aviation Authority quickly looked into the matter. A document that has surfaced from the CAA states the following:

"24 August 84 Ipswich - UK Reportable Accident: A/C [Aircraft] struck object in cruise. Propeller, fuselage, cowling and control runs damaged. The A/C was flying in slight turbulence when a bump was felt. Just before descent the right hand engine control was found to be seized so an asymmetric approach & landing was executed. On inspection it was apparent that the left propeller had struck an unidentified object, propelling it through the cabin roof, with a piece exiting through a window. There were several holes in the fuselage & damage to the engine, aileron & rudder trim cables. Three pieces of foreign metallic object were found, including a small cylindrical magnet. The UFO has not been identified. No information received concerning nature or origin of UFO."

Of course, it's important to note that for the Civil Aviation Authority the term "UFO" did not mean "alien spacecraft." The CAA meant an unidentified flying object in literal terms, and nothing else. But, it is intriguing that of all the places the curious collision could have occurred it was over Rendlesham Forest!

Some Very Strange Information on the Bizarre Vanishing of Dennis Martin