Alaska, a state that is often called "the last frontier" (and hence the reality television program of the same name), is a land of myth and mystery however one may look at it. Despite having a statewide population with fewer individuals than all of San Francisco, thousands of people have gone missing in Alaska in the last few years alone; though many of these disappearances are essentially mundane, there are some cases where the vastness of remote Alaska--as well as some of its potentially dangerous wildlife--could also be factors.

Along with those "modern mysteries" of strange disappearances and similar odd occurrences, Alaska, and the Pacific Northwest in general, are also home to rich cultural traditions involving colorful myths of giant humanlike beings, massive predatory birds, and even sea monsters.

In some instances, themes like those mentioned here, rife throughout American Indian mythology in the region, also seem to have parallels to things that occur in modern times. Here, we will look at three Alaskan legends that, according to some, might have at least some basis in reality, and the possible existence of creatures as-yet unrecognized by science. 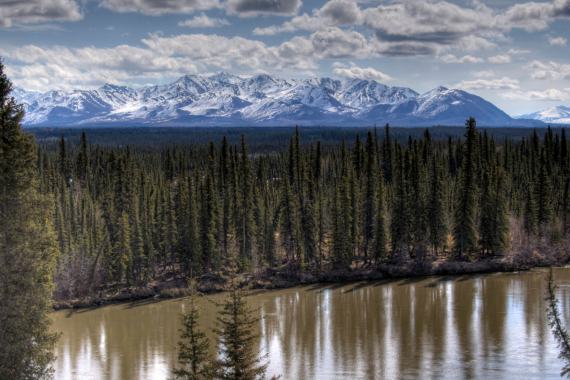 According to the 1901 edition of the Bulletin of the American Museum of Natural History, Volume 15, the Alaskan “Tornit” are described thusly:

“In early times the Tornit, a race of very large people, inhabited the country. They quarreled with the Eskimo because the latter intruded upon their land. This made the Tornit angry, who broke the ground with their lances and spears, and split rocks into pieces.”

“It is believed that the Tornit and Ijiqan, both races of giants, inhabit the interior.”

A legend about the Tornit was recounted in the 1901 Bulletin, which told about how the giants would come to the houses of Eskimos while the men were off hunting, and sometimes kill the women and children there. Another story tells of a pair of Tornit children—a boy and a girl—that were captured and assimilated alongside the Eskimo people. The boy became renowned for his ability to throw a spear, but purportedly vanished into the forest after being made to demonstrate his skill by impaling an old dog in the village. The girl, it was said, eventually married one of the Eskimos in the village.

According to the 1901 Bulletin, “It is said that in the Iglulik country the land still shows how the Tornit tore it up with their harpoon-shafts when they were about to leave, in fear of the Eskimo.”

Terrye Toombs, a former Alaskan now living in Montana, wrote in 2012 about the legends of the Tornits. “Stories of the Alaska Bushmen, or tornits, have been told since the first humans crossed the Bering Land Bridge,” Toombs wrote. “In the beginning, the story goes, the Inuit and the tornits lived peacefully in villages near each other and shared common hunting grounds.”

The Inuit people often built and used kayaks for hunting. While the tornits were unable to master the building of kayaks, they were very aware of the advantages of having and using one. One story goes that a young tornit borrowed a young Inuit's kayak without permission and damaged the bottom of it. The young Inuit became very angry and stabbed the tornit in the nape of the neck while he was sleeping, killing him. The rest of the tornits feared that they too, would be killed by the Inuit and fled the country, rarely to be seen again.

Since that time, many stories have come out of the bush of hunters disappearing, later found dead and mangled or never seen again. Apparently, hunters and the Tornits no longer peacefully shared common hunting grounds.

Toombs told his own story about a fishing trip for salmon in the Deshka and Little Susitna rivers, where one cool and rainy spring, they had been pulling in salmon when Toombs, his father, and his brother smelt an unusual, “skunky” odor. Noticing that most of the other fishermen had left the area, Toombs’ father released the holster on his .45, and the family quickly left the area.

When asked why they were leaving, he told his sons it had been a “bear,” although Toombs recalled seeing uprooted trees that had been thrust into the ground as they left the area:

“I learned many years later that that was a tell-tale sign of bigfoot territory,” Toombs wrote. “I guess I'll never know if that was a bear or a bigfoot that displaced us from fishing that evening, but I do know, that was the last time our families ever fished that river. It was also the first and only time all the kids got to sleep (or at least tried to) in the camp trailer instead of the tents.” 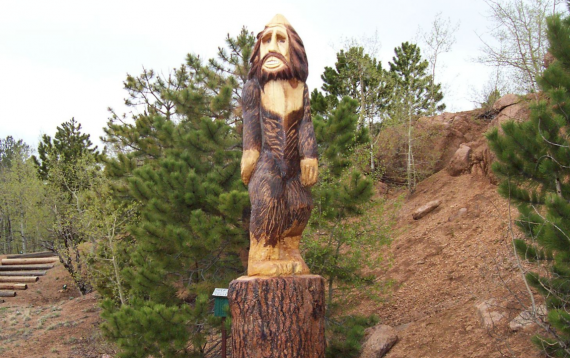 As Toombs mentions, the modern folkloric parallel to the mysterious “Tornit” people, of course, is Bigfoot, the manlike beast alleged to exist in remote parts of the Pacific Northwest. No conclusive proof for the existence of Bigfoot exists, apart from proposed evidence in the form of footprint castings and, on occasion, films purporting to show the creature. However, it is interesting that so many American Indian legends contain parallels to the modern Bigfoot mythos in this way, constituting a small part of the broader "wild man" mythology gleaned from cultures worldwide.

Another creature in Alaskan folklore that may have ties to a real-life animal is the famous "Thunderbird". Although varieties of this gigantic, mythical bird exist among several American Indian traditions, there is a prevalence of such legends in the cultures of Southeast Alaskan and the Pacific Northwest. Stories tell of how the Thunderbird was believed to hunt by hurling giant snakes known as Haietlik, meaning "lightning snake", at whales and other marine animals.

On Friday, October 18th 2002, CNN reported on a most unusual development in southern Alaska. The report told of how, "a bird the size of a small airplane was recently said to be seen flying over southwest Alaska, puzzling scientists." Witnesses who saw the bird said it was the size of a small plane, and compared it to something one would expect to see in the popular Jurassic Park films. 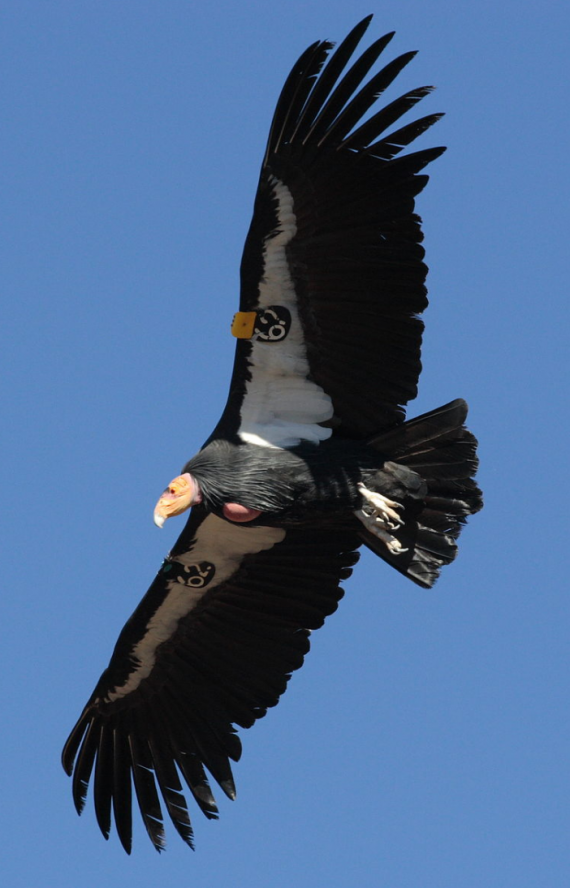 "He's huge, he's huge, he's really, really big," said John Bouker, a local pilot that had initially dismissed the reports until he and several others observed the bird themselves. "You wouldn't want to have your children out."

Writer Terrye Toombs also noted that there is a sea serpent of sorts which is prevalent in Alaskan folklore. "In mythology, the Tizheruk are large, snake-like sea creatures that are believed to roam Alaska's waters," Toombs wrote. "They are described as having a head 7 feet long with a tail ending in a flipper, for a total of 12 to 15 feet long. Tizheruk were said to snatch people from docks and piers."

In 2009, a surprising piece of footage taken by a fisherman off the Alaskan coast, which appeared to show some large, serpent-like creature swimming in the ocean waters.

Paul LeBlond, the former head of the Department of Earth and Ocean Sciences at the University of British Columbia, was quoted by Discovery News saying, "I am quite impressed with the video, although it was shot under rainy circumstances in a bouncy ship, it's very genuine." LeBlond is also coauthor of a book, "Cadborosaurus: Survivor From the Deep," which makes the case for "Caddy," the name given to the sea serpent that occasionally is seen there in the region.

Many have claimed to see Caddy over the years, and a number of carcasses have washed ashore which were believed to have belonged to the creature; most of these, however, were identified later as the remains of known species like sharks and whales.

"It must be a mammal or a reptile," LeBlond said of the serpent like creature in the fisherman's 2009 film, "since it oscillates up and down in a vertical plane, which eliminates sideways-oscillating fish." This description appears to be consistent with similar reports of humped, serpent-like creatures seen along the Pacific coast for more than a century.

It could be that all of these creatures really are merely legends. Or, perhaps it could be that the cultural comparisons between "old" and "new" seen here represent something else; something akin to a long-running commentary on unusual things seen in Alaska and the Pacific Northwest, by natives and newcomers alike.

As a final note, I wish to briefly reference a passage from another article of mine, published last month, where I referenced the discovery of a new species of whale off the Alaskan coast late last year. The relevant quote is as follows:

"It is worth noting that in late 2016, a new species of whale was discovered, following the discovery of an unusual carcass on an Alaskan beach. Japanese legends had previously told of a dark colored, beaked whale, though no particular associations had been made between the alleged beast and any modern identifiable species. Upon discovery of the Alaskan “mystery carcass,” questions about the creature led to the discovery that a set of bones on display at a nearby educational center also belonged to this variety of whale, which was soon determined to be a newly discovered species."

With new species still turning up in Alaska's coastal waters, maybe we should keep an open, but cautious mind, when it comes to the potential that a few additional new species might still turn up.

Eerie Blue Light in Ohio City is a Bad Sign