Universal Translator in Your Own Voice is Coming Soon

If you wait long enough, every gadget seen on Star Trek will eventually be available – not necessarily affordable, but what’s money once you can beam yourself into sealed bank vaults? That’s not ready yet, but the universal translator is coming soon. A San Francisco company called BabelOn (cute) is working on software and custom hardware that will translate your speech into any language and the output will sound exactly like your voice. The technology is close, but the ethical questions and security implications are a long way from being settled. Does anyone really think that will stop the process?

While the goal is instantaneous translation, BabelOn’s Indiegogo crowdfunding page describes how the BabelOn system works right now. Step one will require spending time (an estimated 2 hours) in a special recording studio reading BabelOn-designed scripts with various emotional tones and inflections. A few acting classes might be a good preparation for this.

Two hours doesn’t seem like enough time to develop what BabelOn calls a BLIP (BabelOn Language Information Profile) because this digital voiceprint also contains data on how your mouth moves during speech, an analysis of your breathing patterns while talking and a collection of facial expressions to go along with the emotional content of the words. However, that’s needed before moving on to step two, which is recording the content you want translated into another language and presented in a synthesized copy of your voice and, eventually, a digital image of your face. 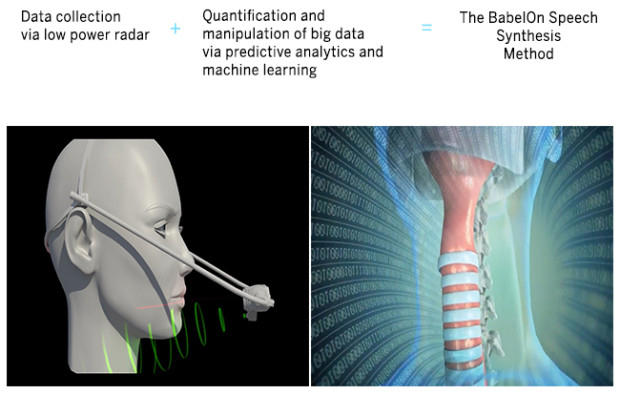 Once all of that data is crunched in BabelOn’s computers, your voice will be heard in the language you selected. That list is currently limited to English, French, Spanish, German, Portuguese, Mandarin, Japanese and Hindi. In a noble gesture, BabelOn says it will also attempt to study, preserve, and recreate languages that are currently threatened to become extinct.

BabelOn recognizes the security issues involved in creating new content in audio that exactly matches a person’s voice – think of the implications if this is the voice of a world leader – and points out that it’s teamed up with a government agency (NASA, not exactly the DoD or NSA). All BLIPs will be stored offline in “our highly secure voice vault” and “will require specific sets of “keys” to open.” That dripping you hear is the sound of hackers salivating.

The first commercial market for the BabelOn technology is movie and TV dubbing, which is not surprising since co-founder Daisy Hamilton says she got the idea after her parents went to the Cannes Film Festival and noticed the huge demand for language dubbing and the lack of quick yet sophisticated technology. While BabelOn is not currently quick, let alone instantaneous, that will be solved with time and money.

Will BabelOn be ready to take along when the first humans land on Mars? Probably. Will the security issues be resolved before the first human creates a digital copy of a world leader and attempts total domination? One can only hope.

Old, Creepy and Dressed in Black