Woman Claims to See Hologram Above Temple Mount in Jerusalem

A video making the rounds in the web last week shows the statement of a woman who claims she witnessed “strange signs” above Temple Mount in Jerusalem that she believes are holograms created by a machine placed on the mountain by the king of Jordan on behalf of CERN, the Large Hadron Collider. While there are plenty of holes in her testimony, the mention of Temple Mount and CERN gets a lot of attention. Is this the big one, Project Blue Beam, a hoax or something else?

The unidentified woman says her observation occurred a year ago on a visit to Temple Mount and she’s been researching it ever since to determine what she saw and, now that she believes she’s found the answer, to warn the world. The first image she shares is what looks like a common ring cloud that she claims was over the Temple Mount for a few hours. She claimed the second image showed three suns, but the blue dot next to the sun looked like a lens flare and the third sun seems to be a hole in a cloud creating a rainbow. She also shows what she claims are beams of light going up from the Temple Mount to the sky. 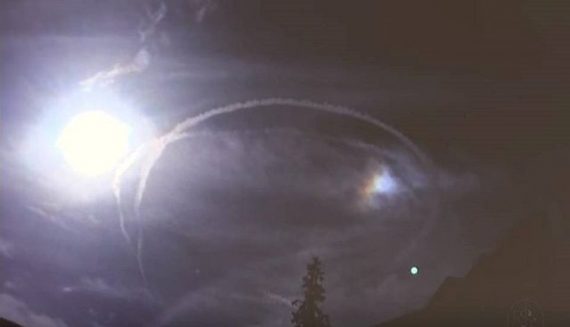 At this point, she brings CERN into the picture. She claims that her concern about what she saw moved her to research similar unusual sightings. That’s where she connected Jordan’s King Abdullah II to CERN, a legitimate link since CERN indeed has a particle accelerator lab in Jordan called … get ready … SESAME, which stands for The Synchrotron-Light for Experimental Science and Applications in the Middle East, which coincidentally just opened in May 2017. As she mentions, CERN is also opening labs in other countries. At that point, she makes references to “God’s Atom,” conspiracies, chemtrails and holograms, some of which seemed to be hinted at by the person interviewing her and reinforced by images added later.

That brings us to the source of the video. 'Round SaturnsEye' or R$E is a YouTube channel run by David Bass. Bass is a British TV Presenter, writer, satirist and filmmaker based in London. The first dichotomy here is that someone in the TV and film business runs a website which professes that all of "the media, the celebrity culture, and the movies" is a "false projection" of a false god. R$E videos are frequently about the end times or the anti-christ and seem to tie everything wrong in the world to … you guessed it … CERN. R$E tries to depict itself as some sort of ministry and the videos are meant to lead viewers to the “truth.”

CERN doesn’t need any help in scaring people but this video by R$E doesn’t present much of case that a ring cloud and rainbow are CERN-generated holograms beamed as a test or warning of anything. It seems more likely that it was created to fulfill David Bass' and R$E’s main purpose, which is $.