Ambassador of Inner Earth Kingdom of Agartha to Give Advice

“This will be the first step in a public disclosure initiative from those from the Inner Earth – the Kingdom of Agartha, to the people of Earth. We invite all of Humanity to attend this public Symposium – and learn more about this ancient civilization, and their timely message to Humanity.”

Good news, surface dwellers. If you’re worried about how things are going topside, help is on its way from down under … WAY down under. A press release sent out on June 30 revealed that Tamarinda Maassen, the “Official Ambassador of Agartha,” will speak at the Agartha to Humanity World Symposium in Garden City, New York, on August 25-27. Better book your rooms early because all of humanity is invited and those Airbnb rentals go fast.

“To the people of Earth we have watched your development for eons, and now is the time to reconnect with our extended family around the World. We invite you to come and learn about your true ancient history that has been purposefully hidden from you by a great and powerful cabal.” 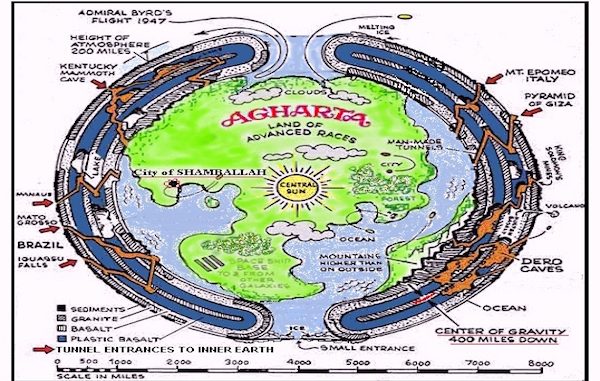 It’s about time. According to many Hollow Earth believers, Agartha is the city in the Earth’s core where an ancient hominid civilization moved to millions of years ago after leaving the surface. They took their vast knowledge with them and occasionally release bits of it to the surface dwellers. Many cultures and religions tell various accounts of this underground world, which is said to have secret entrances in Kentucky’s Mammoth Cave, Brazil, Ecuador, Tibet, Mongolia, India and in other caves and mysterious places worldwide.

“Over the years we have communicated with your population to provide guidance to your leaders, in addition we have sent messages to you through our emissaries. Who by our direction, have published our communications through news articles, and selected media outlets.”

If today’s news is any indication, our leaders haven’t been listening, so it’s time to take the message to the masses. According to the website of Sacred Spirit Tours, Tamarinda Maassen is the founder of Kogaion Secret Travel and the CEO and founder of Svit.RO Consciousness, Energy, and Reality. In those capacities, she offers tours to various sacred places in and around Romania, where she currently lives in the Transylvania area. While it doesn’t say how she was appointed, Maassen is also called a “reputable Knight of the Order of the Warrior Knights of Agartha” and an ambassador of Agartha. It’s in this capacity that she will be appearing in New York in August to help the Agarthians rap humans upside the head.

“We have decided at this point in time in humanities history to engage in a mutual diplomatic dialog with the human population – directly – about our culture, technology, and spiritual insights to assist you for the coming changes you will soon experience. In addition to our presentations at Symposium there will be a questions and answer sessions with the public. All questions will be answered.”

One question should be, “What took you so long?” Another question might be, “If this is for the good of all humanity, why are you selling tickets and holding it in Garden City rather than Madison Square Garden, Washington, Moscow, London or someplace bigger? And why isn’t it on cable?” And “Why not hold it in Agartha? Are you afraid we humans will trash your hotel rooms? What has Airbnb been telling you?”

Perhaps we should pool our money and send one person to be our ambassador of Earth to meet with the ambassador of Agartha. Being a good travel agent and tour guide, Ambassador Maassen may see through this ploy and cancel the symposium, leaving us to deal with our problems alone. That brings us to our last question: “If the Argathians are a superior race, why do they need our money?”

Asking for a friend who would like to believe but is on a limited budget.

Killer Ducks Seen Eating Other Birds For The First Time