“Behind The Paranormal 2” – Reviewed

Behind the Paranormal 2 is the new book from the father and son team of Paul Eno and Ben Eno. The book's subtitle is Bigfoot, Mothman and Monsters You Never Heard Of. As you will already have deduced, this is a book which is definitively cryptozoology-based. So, yes, you get to read a great deal about strange creatures - such as Sasquatch, the Chupacabra, the Mongolian Death Worm, lake-monsters, sea serpents, Dogmen and much more. But, that's not all: Behind the Paranormal 2 provides the reader with good, interesting insights into the lives of those people who devote so much of their time to searching for creatures that science and zoology assure do not and cannot exist. 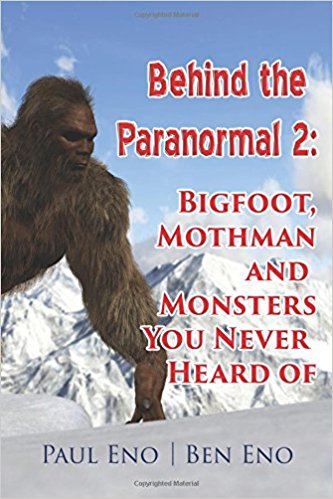 The good thing about this particular book is that there is a great deal of variation - in terms of the beasts that are sought out and their nature too. In other words, we're talking about how some of the investigators in the book take the view that the "cryptids" of our world are flesh and blood, whereas others (like me) are of the opinion that we are dealing with something much stranger. Supernatural, even. Certainly, one of the most fascinating sections of the book is that which is focused on the Bigfoot-themed research and work of the late Rob Riggs. I knew Rob well, and spent a lot of time with him roaming around Texas' massive Big Thicket, which is said to be a hot-spot for Bigfoot activity, as Rob noted in his 2001 book, In the Big Thicket. 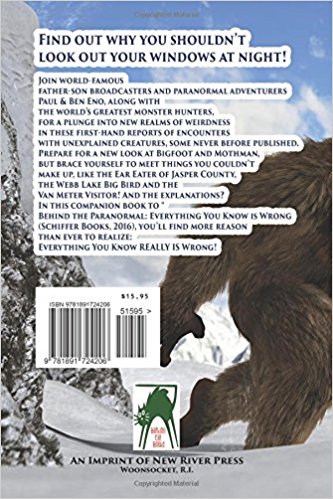 While Rob was a firm believer in Bigfoot, he came to conclude that there is something very weird about the creatures. He is quoted in the book as follows: "There's another phenomenon in the Big Thicket known as the ghost lights. [Researcher] Tom Burnette and I have concluded that the lights are somehow connected with Bigfoot. We believe that Bigfoot is part of what, in Britain, they call 'Earth mysteries,' part of a range of phenomena that occurs in specific areas due to the presence of aberrant energy fields."

As is the case with her own writings, Linda Godfrey's section of the book does not disappoint in the slightest. While the werewolf-like Dogman phenomenon is certainly one of the most controversial of all within cryptozoology (with some concluding that it should not be classed in the domain of cryptozoology and, instead, in that of the supernatural), Linda has never shied away from focusing on the really weird side of cryptozoology. Linda reveals how she got into the field, when she was working as a journalist in 1991. It was undeniably something which changed her life. As was the case with Rob Riggs, we get to learn that Linda does not dismiss the paranormal aspect of the Dogman enigma. This is where what are known as "spirit animals" - and their links to Native American culture - come into play. The Cheyenne people, in particular, Linda tells Paul and Ben, have a rich history of what they term "Dog Soldiers." Clearly, we are not looking at regular animals. Linda's work suggest we're dealing with something that can negotiate various realms: the physical and the spiritual planes.

And, then, there's the Mothman. This particular section is a lengthy one, which is not surprising, as the 1966-1967 saga of the Mothman of Point Pleasant, West Virginia is a long and complicated one. And creepy, too. One of the several people interviewed for this section is Susan Sheppard, who grew up in the area and who has expert knowledge of the Mothman, its history, and the local lore concerning what it may be. This is hardly surprising, as Susan had her own experience as a child, which involved her hearing "footsteps on our roof, like someone had dropped out of a helicopter. It was between two and three in the morning."

Jeremy Robinson's work in the field of what has become known as the Gloucester, New England Sea Serpent makes for good reading. Jeremy takes the view that the beast - or beasts - fall into the flesh-and-blood category. Paul and Ben's interview with Jeremy amounts to a solid, historical look at the story of the mighty leviathan of the deep. Meanwhile, former zoo-keeper Richard Freeman tells the notable story of how he and a colleague, back in 2008, may very well have had an extremely close encounter with an Almasty, a hair-covered humanoid said to dwell in the heart of the Caucasus Mountains. It was in the early hours of the morning, and when the area was blanketed in darkness, that the pair suddenly heard "a deep guttural vocalization. Something was moving with two legs on the veranda."

On top of all that, we have a good profile of legendary cryptozoologist Loren Coleman, my road-trip-style excursions to Puerto Rico in search of the Chupacabra, flying humanoids, and cryptid-based conspiracy theories. And, the dedication to the hunt in hand comes across in fine fashion, too: the enthusiasm that shines through is both welcoming and encouraging. If you want to learn about not just Cryptozoology, but the many and varied people for whom looking for unknown animals and monsters is almost their life's work, then Behind the Paranormal 2 is an excellent book to get your teeth into.