Dragons in Our Midst: The Enduring Mystery of Sea Serpents and Other Maritime Monsters

On August 7, 1999, London Police supposedly received a number of reports of a large, snakelike creature writhing its way along through the River Thames. One frightened onlooker was said to have reported later that day that thing was nearly 200 feet long, and at least several yards in diameter.

With a mass sighting of something so unusual in a populated area, one would think that photos would have emerged. Well, at least one did, which showed a faint, s-shaped wisp of color seen from an aerial view, taken by a photographer that allegedly hadn't even noticed the beast at the time the photo was taken; the image was quickly shown to have been an ordinary aerial image of London's famous river, with the whitish serpent creature photoshopped in later, and perhaps not-so-skillfully.

Again in 2016, footage surfaced (no pun intended) which purported to show a large, many humped "thing" appearing briefly in the Thames. This video, like the earlier report from 1999, seemed far too good to be true, and like many alleged "monster" videos, showed far too little to make a strong case for anything more than a playful hoax.

Such is the problem the poor sea serpent of myth and legend faces: instead of good evidence for their existence, the best attention they seem to be afforded in modern times is usually rooted in pranks and trickery... enough so that even those in the scientific community hopeful enough to entertain the thought of the sea serpent's existence tend to give themselves to cynicism over time.

That isn't to say, however, that some good evidence hasn't turned up. Recently here at Mysterious Universe, I reported on up-to-date testimony that was graciously provided to me by one of the key witnesses of a famous 1983 sighting of a large, snake-like creature off the coast of Stinson Beach, California, on October 31, 1983. 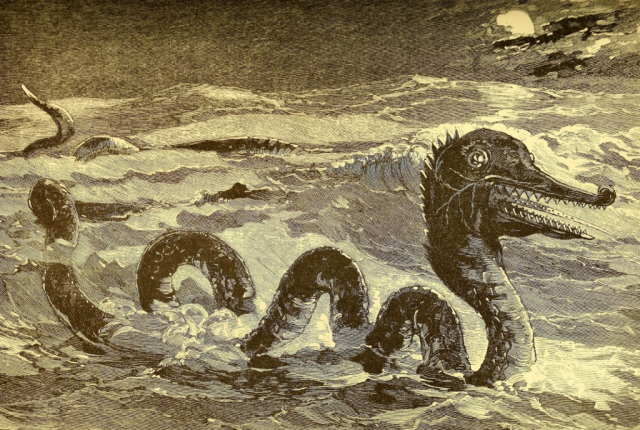 On a personal note, I'm certain I speak for many of us out here that find stories like these to be fascinating, particularly because multiple-witness incidents involving large, undiscovered creatures like this do suggest there is more going on in oceans than many of us are aware. Conversely, such testimony, while valuable in the sense that it does lend some credence to the idea of "sea serpents", unfortunately does little to inspire the same excitement in the scientific community, who rely on hard, tangible proof to justify further scientific inquiry.

During a recent discussion with a skeptical friend on this subject, he brought forth the argument that the Stinson Beach incident might be more compelling, if only it weren't the only sighting of such a creature. "There just aren't any other reports," he said, sipping his craft brew across from me. "Something that big isn't just seen by a bunch of people one time."

He's absolutely right, as I pointed out to him when he said this. No, if it were likely that such a creature existed, surely it would have been seen more times than just once on Halloween day in 1983.

Therefore, let's look at a few of those "other reports" of similar aquatic creatures which, despite numbering in the hundreds, still seem to remain obscure enough in the literature that most people remain completely ignorant to their existence at all.

The first of what we might call "classic" sightings (as many of these date back to the early to middle 1800s) involved a Danish Naval vessel, helmed by a Captain Christmas in 1846. The account given was related by naturalist Philip Henry Gosse in his 1867 volume The Romance of Natural History, Volume 2.

The account, which appeared in the book's Appendix section, titled, "On The Existence of the Sea Serpent", reads as follows:

Thursday December 10--Off Maderia, on board HMS Thames--Made acquaintance with a Captain Christmas of the Danish navy, a proprietor in Santa Cruz, and holding some office about the Danish Court He told me he once saw a sea-serpent between Iceland and the Faroe Islands. He was lying-to in a gale of wind, in a frigate of which he had the command, when an immense shoal of porpoises rushed by the ship, as if pursued; and, lo and behold, a creature with a neck moving like that of a swan, about the thickness of a man's waist, with a head like a horse, raised itself slowly and gracefully from the deep, and seeing the ship, it immediately disappeared again, head foremost, like a duck diving. He only saw it for a few seconds; the part above the water seemed about 18 feet in length. He is a singularly intelligent man, and by no means one to allow his imagination to run away with him.

In his 1974 book In Search of Lake Monsters, researcher Peter Costello featured an additional chapter toward the end, in which reports of long-necked, snake or lizard-like beasts had been observed in the oceans (primarily parts of the North Atlantic, and off the African coast, though other locales were mentioned as well). Costello borrowed from information on these creatures collected by the late Bernard Heuvelmans, who wrote of such creatures in books like On the Track of Unknown Animals, and more specifically, his 1968 book In the Wake of Sea Serpents.

One of the most famous and oft-discussed sea serpent sightings of all time had involved that of the HMS Daedalus, from which Captain McQuhae and his crew aboard observed the large, seemingly reptilian creature for some time. The account, given here by Costello, read as follows:

August 6, 1848, while homeward bound in the South Atlantic, the officers of the ship saw a sea-serpent. The large animal swam past the ship at about 15 miles an hour, close enough for them to make out its features. It had a snake-like head, held about 4 feet above the water, with some 60 feet of the body breaking the surface. Dark brown, with a yellowish throat, the animal had, "something like the mane of a horse" washing about its back.

On their return to England, the story became a sensation, and appeared in the Times, the Illustrated London News, and other publications. Sir Richard Owen, otherwise known as "the man who invented the dinosaur" (or, at very least, came up with their name) had, of course, been a leading authority on this sort of thing in his day. He asserted, with confidence, that the animal McQuhae and his crew had seen was merely a seal, or possibly a walrus caught adrift on a melting slab of ice. This, despite the enormity of the creature by all accounts of those who had seen it, among whom the greatest argument had been whether the creature more closely resembled a snake, or a rather large lizard.

Later in 1883, the Captain of an American whaler, the Hope On, observed an animal with a "head like that of a horse," which appeared protruding suddenly from the water before it submerged again. Estimated to be 20-feet-long, the creature, in addition to its horse-like head, appeared to possess two horns or other protrusions atop the head, and was dark brown in color, possessing four legs or fins.

"In 1889 there was an even more remarkable sighting between Algeria and Gibraltar," Costello reported. "The captain of a British ship reported seeing what at first he thought were two masts sticking out of the water from a wreck but when, examined through a telescope he saw two animals, one larger than the other, between 25 and 30 feet. The larger one raised its head for four or five feet over the water, the smaller about a foot. They were dark brown to grey in colour. Not only is this one of the few reports from the Mediterranean but also one of the few of two animals together."

Yet another famous incident occurred in December of 1893 along the Mauritanian coast, as recorded in the ship's log of the vessel Umfuli, a British ship, by its on-duty officer. The creature described had been an estimated 80 feet in length, possessing (again) a dark brownish color. Of particular note here is the appearance of what appeared to be "three shallow humps" on the creature's back, which is similar to descriptions of the animal seen off Stinson Beach in 1983. The ship's Captain Cringle observed the creature, and noted that the jaws of the creature appeared to possess teeth (also similar to the reports given by Marlene Martin of the Stinson Beach creature).

As can be seen with this short sampling of a much broader existing base of similar "classic" sea serpent reports, we are at no loss for unique tales of marvelous sea creatures seen in the bygone days before cell phones and digital cameras became plentiful. And others worthy of mention exist too, like the sighting by zoologists Edmund Meade-Waldo and Michael Nicoll, who saw a similar long-necked creature swimming off the coast of Brazil in 1905. Still, there are modern reports, we seem to be lacking, though they do occasionally turn up (for a great resource on some Pacific coast sightings in recent years, take a look at the blog maintained by researchers Bill and Bob Clark, seen here). In fact, some of the modern sightings are even accompanied by videos, such as with the 2009 footage of what appears to be a pair of animals swimming off the Alaskan coast.

The 2009 video is featured below (though be warned of the amateurish commentary provided by the hosts in the accompanying segment):

In an interview on the subject of sea monsters with the Daily Mail back in 2011, skeptical cryptozoologist and paleontologist Darren Naish of the University of Portsmouth reported that, ‘The huge number of 'sea monster' sightings now on record can’t all be explained away as mistakes, sightings of known animals or hoaxes. At least some of the better ones – some of them made by trained naturalists and such – probably are descriptions of encounters with real, unknown animals." (For more of Darren's work, check out some of his blogs on sea monsters at Scientific American, as can be seen here).

Could it indeed be that there is at least one variety of large sea animal, perhaps snake or lizard-like, that might account for the ongoing reports of "Sea Serpents", the likes of which have been discussed literally hundreds of times in various collected reports over the decades? Even if we could easily rule out a majority of these, the lingering possibility that a few, as Darren Naish puts it, "can’t all be explained away as mistakes, sightings of known animals or hoaxes," is enough to tantalize the hopeful--but cautious--cryptozoologists among us.