Humans Could Have Outrun T. Rex

Another movie staple bites the dust, thanks to science. A new study found that animal speed plotted against size is not an ever-rising line but a bell curve, meaning that the bigger they are, the slower they crawl. This mean those great movie scenes showing a resurrected Tyrannosaurus Rex galloping after a terrified human until big T catches its dinner are no longer realistic. Will expendable characters in future dinosaur movies have to be eaten by packs of prehistoric iguanas?

Researchers at the German Centre for Integrative Biodiversity Research in Leipzig were looking for a way to explain why speed does not increase in direct proportion to size in animals currently living on Earth. They hoped an accurate model could also be used to determine how fast or slow various dinosaurs ran and end the much-argued question of the speed of the fearsome T. Rex.

As told in the current edition of the journal Nature Ecology & Evolution, researchers under the direction of zoologist Dr. Myriam Hirt from the Friedrich Schiller University Jena looked at 500 species – not just land animals but birds and marine species as well – and created a simple model that would predict an animal’s speed based on just its weight and the medium (land, water, air) it travels in.

"The best feature of our model is that it is universally applicable. It can be performed for all body sizes of animals, from mites to blue whales, with all means of locomotion, from running and swimming to flying, and can be applied in all habitats."

According to Dr. Hirt, the key to speed is the anaerobic acceleration phase where muscles operate without oxygen and depend on stored energy instead. Bigger animals require more stored energy for a longer period of time to accelerate to fast speeds. Unfortunately, as big human joggers can attest, that energy runs out long before you can catch up to Usain Bolt.

When plotted by the model, the speed bell curve peaks at animals of a small to intermediate size, says Dr. Hirt.

“In nature, the fastest running or swimming animals such as cheetahs or marlins are of intermediate size.” 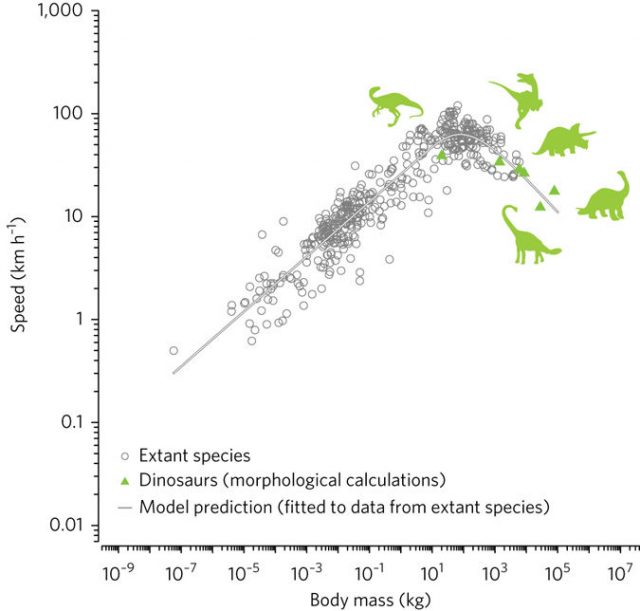 And T. Rex? The model shows that the 9 ton beasts were able to slowly but steadily accelerate to a top speed of 17 mph (27.3 kmph). That would allow it to keep pace with Triceratops but eat the dust of Velociraptors … and Usain Bolt.