If the Loch Ness Monster is spotted on land rather than in the water, is it still a tree stump? If Nessie can live out of the water and travel around Scotland on land, who gets to give it a new name? Those are just some of the questions being asked by Scots living near Stirlingshire, nearly 150 miles from Loch Ness, after a dog walker posted a photo of what appears to be a Nessie-like creature he saw in a field. Is this a tall tale, a tree trunk or a terrifying tiny tetrapod?

According to the Stirling News and other local media reports, one Jimmy Wright of Killearn, another town in the Stirling council area, was walking his unnamed and unidentified dog on Crow Hill in the Stirlingshire village when he spotted … something. While there’s no record of whether the dog spotted it as well, Wright had the presence of mind to take a photograph of the thing before, he claims, it disappeared. 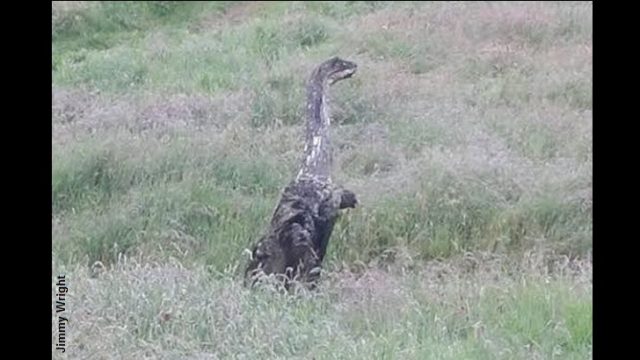 Being concerned about the safety of his fellow Stirlingers (Sterlingites? Stirlinguists?), Wright immediately reported the unusual and possibly dangerous creature to the police, the military, wildlife experts and local hunters.

Ha ha! Jimmy Wright doesn’t care about his fellow Stirlingdings or the rest of humanity. All he cares about is his own 15 minutes of Nessie fame. He posted the photograph on Facebook and asked if anyone else thought it was a “land relative” of Nessie. None of his ‘friends’ and very few of the commenters on the story did. Most agree it looks like … you guessed it … a Nessie-like tree stump out of water. Since Walker didn’t give any details on the creature’s size, a few thought it was an otter or an otter-turtle hybrid.

Scottish otters, while small in size, are still fearsome. Their Gaelic name Beaste Dubh means “black beast” and just a few weeks ago an man from Lockerbie in Dumfries and Galloway (not far from Stirlingshire) posted a video of himself being attacked, bitten and chased by an otter … beastly! 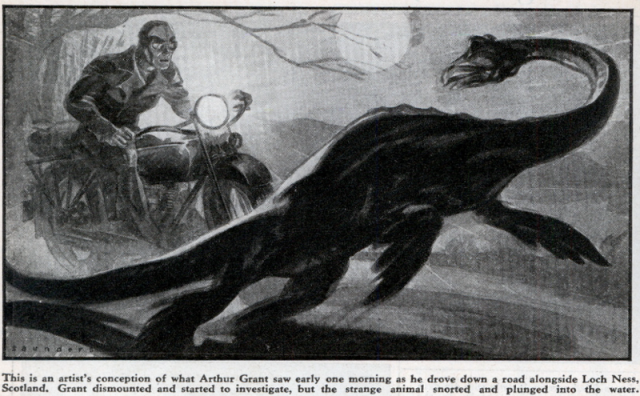 What about those holding out hope that the lack of Nessie sightings this year may be due to the monster going mobile (and apparently shrinking – curse you, climate change!) and moving to Stirlingshire or one of its nearby lochs? Nessie experts and fans know that there have been many reports of Nessie-like creatures on land, including the famous 1933 George Spicer sighting which began with a large creature crossing a road.

There have been no other reported sightings in or around Stirlingshire. You’ve seen the picture. It definitely looks like … something. What do you think it is?