Levitating Rocks Photographed at Crystal Mine in Arkansas

In what has to be the worst-kept paranormal secret since the 3-fingered mummies, a crystal mine that has been inexplicably closed for months is about to reopen so that the world can witness the strange phenomena which have been occurring so often since February that the owners shut the place down in May … mysterious orbs, unidentified lights, stones falling from the sky and rocks levitating. The closure was to allow experts and TV crews to come in and see the oddities for themselves and, of course, to make a reality show about the mine.

“Look, we know how this sounds, but we aren’t trying to pull anything over anyone. Not only have we seen things with our eyes, but we have cameras that have caught the different phenomena happening.” 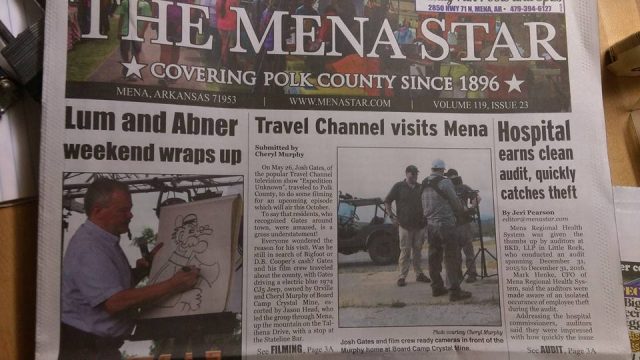 Orville Murphy owns the Board Camp Crystal Mine near Mena, Arkansas, with his wife, Cheryl. The mine – discovered in 2008 and opened in 2012 -- is described on their website as a day camp with an “actual native, virtually untapped crystal mine and public dig site” that is completely above ground and tree-covered so “rock-hounds can dig in the shade!” That’s pretty much what they and visitors found until February 2017 when strange things began to happen. After setting up a game cam and capturing photographs of what seemed to be levitating rocks, they posted a video.

This got the attention of MUFON ( Mutual U.F.O. Network) and the Travel Channel. After closing the camp in May to allow undisturbed access, MUFON investigated the phenomena, saw it for themselves, assured the Murphys that it was “undeniably scientifically unexplained” and will publish their findings in the November 2017 issue of the MUFON Journal.

“We were told that our reports were taken seriously because of physical evidence that we were able to show. MUFON says that 97% of reports are nothing, but 3% have something behind them. We fall into the 3% because we have credible physical evidence.”

That “physical evidence” will be shown in the Board Camp Crystal Mine’s segment on a 4-part Travel Channel mini-series called “Expedition Unknown: Hunt for Extraterrestrials,” hosted by adventurer Josh Gates and scheduled to be broadcast in October 2017. The Murphys are under a tight non-disclosure agreement but have given some press information and are reopening the camp on July 31, 2017, over two months before the show airs. Will they be able to keep things secret while keeping visitors interested in just hunting for non-floating crystals?

That’s only one of their dilemmas. The Murphys are devout Christians and were troubled by the anomalies happening at their camp. They feared being ridiculed or ostracized by others, not to mention the possibility that the mine might be possessed by unwanted spirits or aliens. Fortunately, they no longer feel that way.

“We found an article in my daily devotional by Billy Graham, titled ‘The Mysteries of God’ that provided us with the comfort we were looking for and we encourage others to read it online, who may feel troubled by our news. For years, people have been seeking the truth to such phenomena, and perhaps the happenings at Board Camp Crystal Mine can shed some extra light, because some of the phenomena may be linked to the energy in the crystals.”

It sounds like there’s something for everyone at the Board Camp Crystal Mine. For more on the levitating stones, you’ll have to pay a visit or wait for the mini-series.