While we’re waiting for someone to tell us what that “three-fingered mummified humanoid” unveiled last month in Peru in Peru really is … so far, all we know is that the researchers at Gaia.com have named it ‘Maria’ … we hear from the same group that another 3-fingered (and 3-toed) mummified humanoid was found in the same tomb, only this one was a mini version. Will this “change everything” or just put more change in the pockets of those charging for videos of the dissections and analyses?

"Another body from Nazca is now being investigated. While similar in some ways to 'Maria', this specimen appears to be a completely different species."

A new teaser released by Gaia.com unveils one of its researchers and TV reporter Jaime Maussan examining a small, white, statue-like headless figure. To keep track of them, this one has been named Victoria. This teaser implies that Maria has positively been identified as a species that is different from humans and that Victoria is ‘completely different’ from both. While the video at Maria’s debut shows scans purported to be of her skeleton, no DNA test results appear to have been released so far. 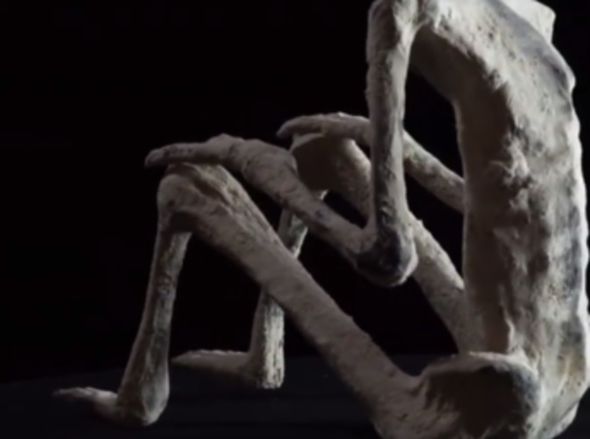 How have they determined that headless Victoria is indeed a different species than Maria? It seems the main evidence is her size. She’s in a seated rather than fetal position like Maria. Scans have apparently also been performed on her which show 11 vertebrae (humans have 33) and an extrapolation puts her height at about 23 inches (58 cm). Victoria has no head to compare to Maria’s elongated one.

That headless neck exposed what may be inside Victoria. The video calls the fibrous stuff being pulled out and cut off “bone,” “tendons” and “arteries” and compares the skin to that of a reptile. There will probably be more videos because …

“We also learn that she was not alone. The team has gotten reports of smaller bodies being discovered in the same tomb.”

The video ends with the question, “What do you think it might be?” and the address to the web site where you can get more info for a fee. Does this change everything? No. Does it change anything? Probably not. After the first announcement, it appears that opinions on Jaime Maussan and Gaia.com have already been formed and strong evidence of the DNA kind that these are “completely different species” and not some elaborate plaster hoaxes is lacking.

One thing is for certain … if these really turn out to be alien humanoids, they have enough digits to give non-believers a finger.