Mysterious Devil’s Footprints Around the World

The world of cryptozoology is no stranger to odd footprints found throughout the world, coming in a wide variety of sizes and with their own peculiarities. These tracks often leave bewilderment, bafflement, and spur on question as to their origins and what sort of creature could have made them. The answers of what caused them are not always completely clear, but they invariably are cause for much debate and speculation. Among these anomalous prints are those that are from far-flung destinations yet seem to share some similar traits; that of some hoofed creature that has left its footprints behind, and which have caused debate as to whether they are caused by the same strange creature, a hoax, or just a curious coincidence.

By far the most well-known and widely circulated stories of such mysterious footprints is that of the original “Devil’s Footprints,” also called the “Devil’s Hoofmarks,” in the area of East and South Devon, in England. On the morning of February 8, 1855, the area was blanketed with snow from the night before, and it seemed as if everything was frosted in white. Residents were surprised to find a long track of strange, hoof-like prints that seemed as if they must have been freshly made. The individual prints reportedly measured around 4 inches long and 3 inches wide, and seemed to have been made in a nearly perfect, single-file line, with each print spaced between 8 to 16 inches from each other. They looked to be cloven and from something bipedal, in short like tracks from nothing the locals had ever seen, and they meandered through the snow for between 60 to 100 miles, depending on the report. Some reports mentioned that the prints actually seemed to have been melted or "scorched" into the snow, as if from some intense heat.

As odd as this all was, what made it all even stranger was the bizarre route that these prints took, going right up over walls, along narrow fencing, over house roofs, through barns, haystacks, gardens and courtyards, across frozen lakes, fields, and spookily often seeming to come right to people’s front doors, as if whatever had made them had been intently investigating these homes. Oddly, in some cases it seemed as if the prints had entered and exited pipes that were only around 4 inches in diameter, passed through locked gates, or seemed to wander straight up trees, as well as in totally enclosed or locked off areas and other improbable places. The weird story took off and was widely publicized in newspapers of the time.

The people of the area were spooked to say the least, and began to strongly believe that these were not the tracks of any normal animal, but rather those of the Devil himself. Many were afraid to leave their homes at night, terrified that the Devil was still out there roaming about and that he could sniff out their sins. More rational explanations have encompassed everything from hoaxes or the distorted tracks of mice, birds, rabbits, badgers, ponies, horses, and even escaped kangaroos, to things like raindrops falling and creating the depressions and even the far-out idea that a weather balloon had drifted down to drag along the ground, but none of these fully explain the mystery, and the “Devil’s Footprints” of Devon have largely remained an enduring mystery.

Interestingly, on March 5, 2009, it seems that there was a very similar phenomenon reported from precisely the same area. In this case, a resident named Jill Wade, of Woolsery, North Devon, claimed to have found a strange line of pointed, cloven hoof-like footprints in freshly fallen snow in her own backyard. Wade reported that the tracks were 5 inched long, with a stride of between 11 and 17 inches, and stretched on for 60 to 70 feet across the garden in an arch-like shape, starting at her window and going out to the other side of the yard where they disappeared. The bizarre tracks were examined by a biologist with the Centre for Fortean Zoology (CFZ), Graham Inglis, who noticed their striking similarity to the Devil’s Footprints of 1855 from the same vicinity, and could not find an easy answer to what made them. However, Inglis did have reservations about jumping straight to paranormal explanation, and said of the tracks:

This is certainly a first for me. The footprints are peculiar, but they are not the devil's - I don't believe the horned one has been in Woolsery. Personally I think it belongs to a rabbit or hare but quite an academic punch-up has started over it. 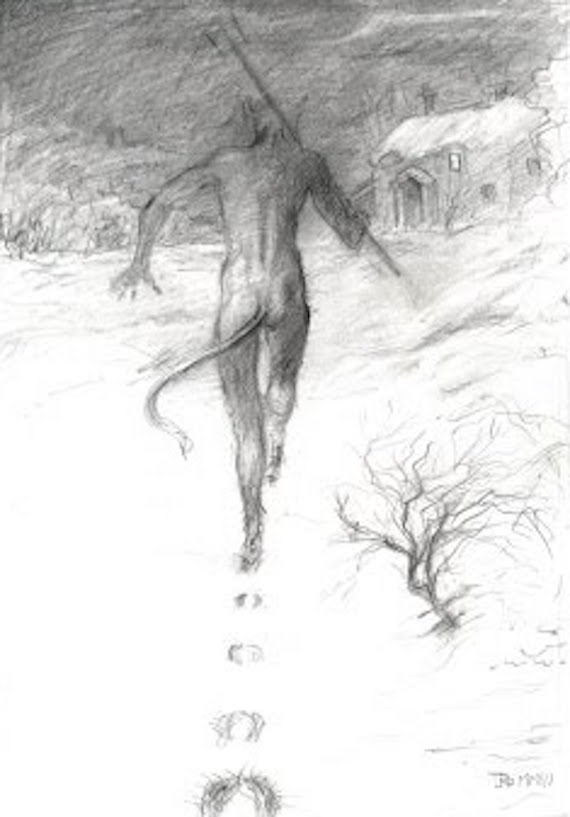 While the Devil’s Footprints of Devon are rather well-known, more obscure cases of a very similar phenomenon have come in from various places around the world. One such account comes to us from May of 1840, on the remote Kerguelen Islands of the southern Indian Ocean. These windswept, rocky swaths of treeless frozen land are surrounded by mercilessly rough, grey waters and are located more than 3,300 km (2,051 mi) from the nearest traces of civilization, Madagascar Island, making them one of the most isolated places on Earth and earning the islands their nickname Îles de la Désolation, “The Desolation Islands.” The only plant life to be found here in this chilly, uninhabited domain are some lichens, mosses, and grasses, and the only animal life here are a few species of insect, seals, and some sea birds and penguins, as well as feral rabbits, cats, and sheep that have been introduced by passing ships.

In May of 1840, Captain Sir James Ross found himself on these shores as part of an expedition to catalogue the plant and animal life of the archipelago’s main island of Grande Terre. The island was described as being mostly a barren, lifeless wasteland of sparse lichens and moss, with no land animals seen at all. Indeed, at the time there were no introduced large land animals present on the island and the only creatures to be found were insects, seabirds, and seals along the coast. It was for this reason that one discovery would be all the more bizarre.

One small detachment led by a Lieutenant Bird came across a rather odd sight as they went about searching the inhospitable, snow swept land for any signs of life. There in the freshly fallen snow was a line of horseshoe-shaped, hoof-like tracks measuring 3 inches long and 2.5 inches wide, which meandered through the snow for a while before disappearing at a rocky area without snow. Since the island had proven to be devoid of any large land animals and the expedition had no horses or ponies, it was baffling as to what could have possibly made the prints.

In the end, Lieutenant Bird speculated that a horse, pony, or donkey must have been left there by a previous expedition or made it to the island from a wrecked ship, but considering that a horse would have died in the arctic conditions of the island on its own if it was a castaway then it must have arrived there fairly recently and there has been no sign of any other expeditions or shipwrecks in the vicinity at all. Could these prints have possibly been left by a horse or pony that had been left there by someone or had, even more improbably, escaped a wreck and managed to swim to shore through unforgiving rough waters full of choppy waves and deadly currents, or was this something else? It also seems improbable that it could have been a hoax considering no one else was there. It remains a mystery.

Yet another unexplained set of “Devil’s Footprints” was found in 1945 near Everberg, Belgium. On January 10 of that year, a curious set of bizarre prints was found etched into the snow on a hill behind a place called the Chateau de Morveau. The hoof-like prints measured 2.5 inches long by 1.5 wide, and were composed of a series of a pair of two prints 9 inches apart that then formed a perfect single-file line of tracks spaced 12 to 15 inches apart, as if whatever had made them had been hopping along. The tracks wandered for several miles across the hillside, forest, fields, and a stream, and strangely they went right over some deep snowdrifts yet there was no sign of an animal’s body sinking within the snow, only those odd footprints perched atop the frozen white. Locals in the area had never seen anything like it, and one man who investigated the prints, an Eric Frank Russell, specifically said that they were very reminiscent of the Devil’s Footprints of Devon in 1855. Although some have theorized that the tracks were made by a goat, which are common in the area, the Belgian prints have never been satisfactorily explained.

Are any of these cases of mysterious tracks related? They certainly share some similar traits in their size, appearance, disposition, and the fact that they keep showing up in the strangest of far-flung places. They could be unrelated, but even if they are we are left with the question of what formed them. Was this the work of known animals, strange weather or atmospheric phenomena, hoaxers, or something else? Whatever the cause may be, one wonders when the next set of these bizarre, cloven tracks will turn up next and what significance they will have, and while there may very well be a mundane explanation at their root, they still manage to incite debate and stir the imagination.

“This Thing Was Definitely Not Human”