“In the Caucasus caught a creature similar to a brownie ... Unusual video excited the network. It depicts a strange creature, densely overgrown hair, something that does not resemble any other creature."

That’s the rough Google translation of the description in a video uploaded by someone in Azerbaijan of a small hairy bipedal creature. The folks at the Cryptomundo website got word of the video from well-known Russian cryptozoologist Igor Burtsev, a hominologist and head of the Yeti institute at Kemerovo State University. While Burtsev did not see the creature in person, he determined that the video was taken in late 2016 but did not give any clue as to what the person in it was saying not any speculation on what the creature might be.

That gives us free reign to speculate. While those looking for a quick answer say it’s a monkey dressed in a little ape costume, that seems too easy. The black fingernailed hands seem too big for the small creature to be a monkey. However, it’s calm enough to possibly be a pet playing along with a prank.

Azerbaijan is between Southwest Asia and Southeastern Europe with the Caspian Sea to the east, Russia to the north, Georgia to the northwest, Armenia to the west and Iran to the south. It’s folklore has a number of creatures that this one could be related to. An interesting possibility is the Meshe Adam or Ağac Kişi, which means tree man or forest man. This is believed to be a spirit that takes the shape of an apelike hairy creature with a human face and could be the “brownie” that the video’s description was referring to. 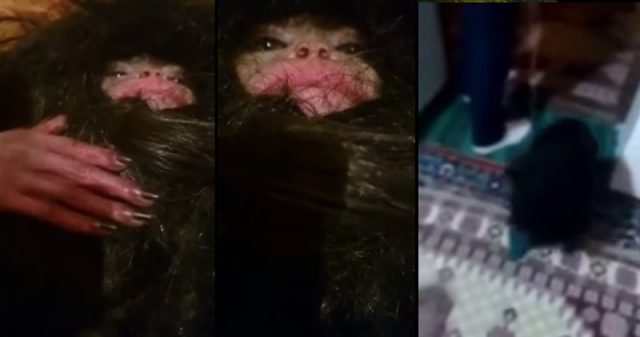 Another option mentioned by the Cryptomundo website is the Almas or Wild Man in Mongolian. The bipedal Almas is said to be more human that ape and believed to roam the Caucasus and Pamir Mountains of central Asia and the Altai Mountains of southern Mongolia, putting it close to Azerbaijan. The Almas is generally described as a large creature in the 500-pound range, so the one in the video would have to be a youngster or possibly an adult with a growth defect. As expected, they get linked to the Yeti, but some speculate, if they truly exist, that they could be leftover Neanderthals or Denisovans.

Or … it could be something completely different. Alien?

So far, the money is on monkey. A Planet of the Apes promotion? Seems too lame. A cruel pet owner with a mean sense of humor? More likely. Then again, Igor Burtsev did not rule out some sort of cryptid or cryptid baby. Since he couldn’t translate much of the dialogue, he’s hoping the owner comes forward with the creature or more information. Good luck with that.

For now, bet your rubles on a wrapped rhesus.

‘Alien’ Actor Claims to Have Seen Aliens and UFOs