Paranormal Pterodactyls In The U.K.?

Imagine driving, late at night, across the foggy moors of England and coming across what looks like nothing less than a living, breathing pterodactyl! From 1982 to 1983, a wave of sightings of such a creature – presumed extinct for million of years - occurred in an area called the Pennines, also known as the “backbone of England." It's a story that, in much lengthier fashion, can collectively be found in Jenny Randles' excellent 2002 book, Supernatural Pennines and in issue 9 of UFO Brigantia, a much-missed magazine of the 1980s and 1990s and which was edited and published by Andy Roberts.

So far as can be determined, the first encounter occurred at a place with the highly apt nickname of the Devil’s Punchbowl, on September 12, 1982. That was when a man named William Green came forward with an astonishing story of what he encountered at Shipley Glen woods. It was a large, grey colored creature, that flew in “haphazard” style and which possessed a pair of large, leathery-looking wings. The latter point is notable, since it effectively rules out a significantly sized feathery bird, and does indeed place matters into a pterodactyl category. 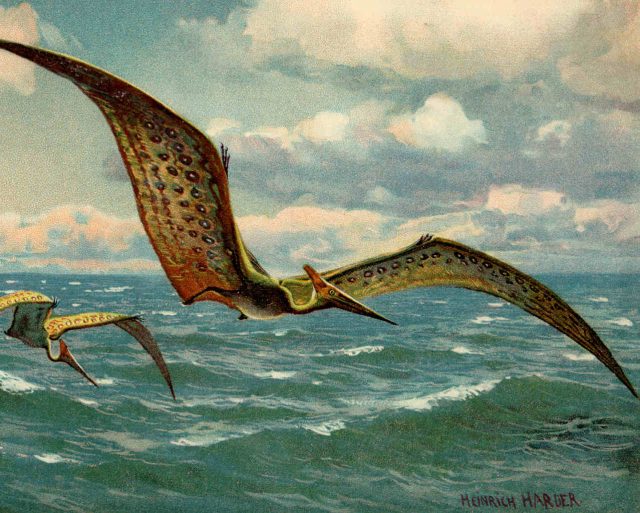 Seventy-two hours later, a woman named Jean Schofield had the misfortune to see the immense beast at the West Yorkshire town of Yeadon. That the thing was heading for the Leeds/Bradford Airport provoked fears in Schofield’s mind of a catastrophic mid-air collision between a passenger plane and the mighty winged thing. Perhaps inevitably, the local media soon heard of the sightings and the story was given pride of place in the newspapers of the day. While the theory that a large bird of prey had escaped from a menagerie or zoo satisfied the skeptics, it did not go down well with the witnesses, who were sure that what they had encountered was something straight out of the Jurassic era.

Rather notably, the media attention brought forth additional witnesses, including Richard Pollock, who claimed he and his dog had been dive-bombed by the monster, which descended on the pair with alarming speed, “screaming” as it did so. Pollock hit the ground, protecting his dog as he did so. Given the fact that the creature was practically on top of him, Pollock couldn’t fail to get a good look at it: he described it as reptilian, and with a face that looked like a cross between a crocodile and a bat, which is actually not a bad description of a pterodactyl.

There was then somewhat of a lull in reports; but they exploded again in May 1983. There was a sighting at Thackley on May 6, by a witness whose attention to the creature was provoked by the sudden sound of heavy wings beating above. Yet again, it was a case that not only caught the media’s attention but provoked others to come forward. One of them was a Mr. Harris, who said that in November 1977, at Totley, he saw just such a flying monster that soared overheard, growling as it did so. He was adamant that what he saw was a full-blown pterodactyl.

Quite naturally, further attempts were made to try and lay the matter to rest, including the theory that the pterodactyl was actually a radio-controlled model. And claims of escaped, exotic birds were trotted out, but without a shred of evidence to support them. A few more, somewhat vague, reports trickled in. For the most part, however, the curious affair of the Pennines pterosaur was over.

If we can rule out radio-controlled models, hoaxing, and mistaken identity, what does that leave us with? It seems downright ridiculous to give credence to the idea that a pterodactyl was (or several were) flying around the skies of northern England. And, yet, that seems to have been precisely what was going on. There is another explanation that might just work. It has been suggested that perhaps what the astonished and terrified witnesses encountered was not a living pterodactyl, but the ghost of one. Millions of people believe that the human soul, or life-force, lives on after death. So, why should that not be the case with animals, too? Certainly, there are numerous cases on record of people who claim that beloved, deceased pets have returned to visit them, in spectral form...