Requiem For Roswell: Setting the Record Straight on an Innocuous UFO Event

It's the story that never ends, and certainly one that will not go away.

It has been so often covered and continually rehashed that many websites, authors, radio shows and podcasts that delve into the unexplained have sworn never to mention it, for fear of boring their followers into a sound and restful slumber.

It's like that vampire who, no matter how many times he is impaled, incinerated, beheaded, or staked through the heart, somehow gets rewritten into another plot so that the story can continue on and on, ad nauseam.

Or that one zombie that keeps getting blasted to bits, and just won't stop coming after you.

I think you get the point. The persistence of this particular story is due, in part, to its legendary status in UFO circles, as well as what, for decades, was held by many to be "the smoking gun" as far as proof that extraterrestrial life has indeed visited our planet.

I ask forgiveness in advance--both from my readers, and my editors--for joining the ranks of the present surge in reporting on this tried, true, and now more-than-slightly-over-cooked UFO story. Yes, many would agree that Roswell has seen a bit more attention than it really deserves over the years (especially in the last few weeks). However, as I hope to help illustrate here, its relevance in relation to what was happening in 1947 has also been somewhat overblown, especially when compared with other UFO reports in the weeks preceding the alleged crash at Roswell.

So I'll do my best to help set the record straight on a few things, and then I'll quietly toss a smoke bomb and disappear, returning to my oath of silence on the perennially overdone Roswell UFO incident.

As expected, Roswell has been getting a lot of attention lately, coinciding with the 70th anniversary of the incident. A recent festival (well, a series of festivals) in the New Mexico town, which has now become a tourist hub for trinkets of the extraterrestrial variety, showcased events and speakers like my fellow MU writer Nick Redfern, and several others that gave perspectives on the incident. 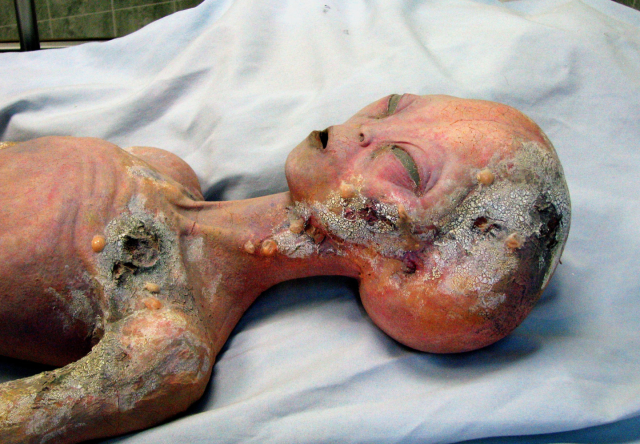 What has also been interesting has been the media coverage Roswell has been getting from outside the UFO community in recent weeks. Dozens (and dozens) of articles have appeared, rehashing the incident and retelling the presumed explanation involving what, in likelihood, might have been a then-secret Project Mogul balloon that dropped onto a ranch outside of town. In nearly every case, the explanation is given in shades of sarcasm, as though the old "ET crashed there" idea is really what most serious UFO buffs still believe.

That's not the case, of course. Speaking for myself, I concede that the Mogul explanation is at least one of several plausible scenarios that explains the Roswell incident, and the inconsistencies in reporting that occurred around the time (most notably, the downgrading from a "flying disc" to a "weather balloon", which many have argued as being evidence of a conspiracy).

But that's neither here nor there. Let's look at a few headlines and excerpts from recent articles on the subject, along with their sources, and see what kinds of patterns emerge:

One recent headline at Bleeding Cool read, "Roswell, The Beginnings Of The UFO Craze And What It Has To Do With DC Comics." Elsewhere, writing for Smithsonian.com, Donovan Webster noted that, "In Roswell, New Mexico, exactly seven decades ago this month (July), the first little green men arrived." On July 7th, the Texarkana Gazette similarly reported, "Today marks 70 years since the U.S. began seriously contemplating whether there might be something 'out there'."

What do these headlines and excerpts all have in common? Each one appears to insinuate that the modern UFO craze essentially began in July, 1947. Further, the alleged crash at Roswell, New Mexico, is presented as though it had been influential enough, at the time, that it helped spur a "UFO craze" in 1947, which ultimately led to widespread belief in UFOs leading up to the present day.

However, while it makes for attention-grabbing headlines, there are a few problems with this retelling of history.

A few media outlets got things right. For instance, at JSTOR Daily a somewhat tepid article titled, "Roswell, Sacred Shrine of UFO Enthusiasts" correctly noted that, "A brief UFO craze resulted from the events of the summer of 1947. And there the story ended—until the late 1970s, when an alternative story began to emerge. It wasn’t a balloon after all: it was a spacecraft whose remains, including alien beings, had been kept secret since."

That's right. The "events of the summer of 1947" referenced here, in a scholarly sense, don't pertain exclusively to the Roswell incident, nor even the famous sighting by Kenneth Arnold of what became known as "flying saucers" over Mount Rainier the month beforehand. Following Arnold's sighting, and leading up the incident at Mac Brazel's farm outside of Roswell, newspaper articles from the intervening two-week period recount hundreds of UFO reports that were seeing coverage at the time.

In other words, the "UFO craze" of 1947 was already well underway by the time the incident at Roswell occurred. Let's take a look at why this was the case.

One of the best historical commentaries on this period had been a NICAP report that was compiled in 1967, appropriately titled "Report on the UFO Wave of 1947," over at the NICAP website. The report's author was Ted Bloecher, although a foreword was provided by Dr. James E. McDonald, who at the time was, in addition to being a UFO advocate, the Senior Physicist at the Institute of Atmospheric Physics, University of Arizona.

In his foreword, McDonald gave us the following background on Bloecher's work, and the prevalence of UFO reports during the two week period culminating in the events at Roswell, New Mexico:

"...[A]lready in the first two weeks after Kenneth Arnold's Mt. Rainier report of June 24, 1947, press reports of other American sightings of highly unconventional aerial objects numbered not the dozen or so that most of us might recall, but many hundreds. Since Bloecher is careful to concede that his own searching cannot possibly have gleaned every last report from the 1947 press files, we can safely round upwards his collection of about 800 reports to an estimate that at least some thousand sightings of unidentified objects probably occurred within the United States in midsummer 1947, the bulk of these coming within a rather sharply defined wavecrest centered on about July 7. As Bloecher properly emphasizes, this clearly marks the episode as one of the outstanding sighting-waves on record."

Of course, McDonald and Bloecher contended that the "wavecrest centered on about July 7," which coincided with the date Mac Brazel first approached Roswell Sheriff George Wilcox, and told him that he believed one of the alleged "flying discs" making headlines around the country might have crashed on his property (the actual crash occurred sometime in the middle of June, and Brazel first noticed the scattered wreckage himself on June 14th, only reporting it once he began to suspect the wreckage could be one of the mysterious discs). In other words, Bloecher's research showed the peak of the "surge" occurring one day before the Roswell story even hit the newsstands.

The following day on July 8th, the story of a "flying disc" that was captured became news, after the issuance of an RAAF press release which, at that time, also referred to the object as a "disc." By July 9th, the explanation involving a balloon had replaced mention of a "disc", and was appearing in newspaper reports, most notably the Roswell Daily Record. 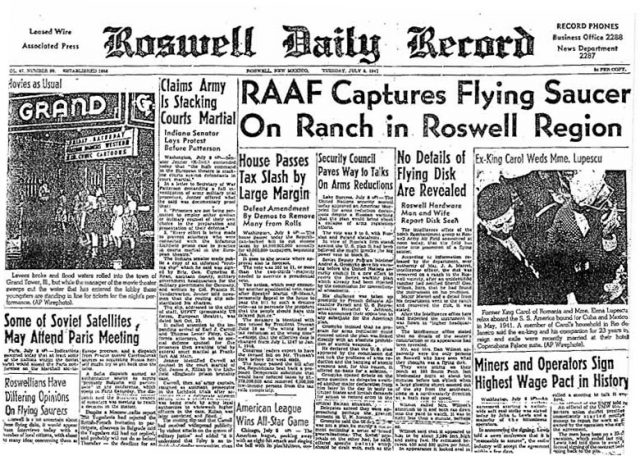 It is important to remember here, of course, that interest in the Roswell incident itself didn't begin to really gain traction until decades later, beginning in the late 1970s. Researchers including Stanton Friedman and others began interviewing witnesses and reviving interest in the story, which led to the first popular books being written about an alleged UFO crash, and the ensuing cover-up that occurred. Therefore, while it is often insinuated that the controversy surrounding Roswell had been what helped launch the 1947 UFO craze, the incident didn't really begin to receive much attention until 1978.

That said, there were countless other UFO sightings and reports in the summer of 1947 that were getting plenty of attention.

Also worth noting is that, while Ted Bloecher did a fine job chronicling the "wavecrest" of reports that sparked the great UFO wave of 1947 (with or without the direct help of the Roswell Incident at that time), he also notes a number of reports of UFOs that occurred earlier in the year, placing them several weeks prior to Kenneth Arnold's "first" sighting in June. Among the earliest had been the following report from April, 1947:

As early as the middle of April 1947, at the Weather Bureau in Richmond, Virginia, a U. S. Government meteorologist named Walter A. Minczewski and his staff had released a pibal balloon and were tracking its east-to-west course at 15,000 feet when they noticed silver, ellipsoidal object just below it. Larger than the balloon, this object appeared to be flat on bottom, and when observed through the theodolite used to track the balloon, was seen to have a dome on its upper side. Minczewski and his assistants watched the object for fifteen seconds as it traveled rapidly in level flight on a westerly course, before disappearing from view. In the official report on file at the Air Force's Project Blue Book, at Wright-Patterson Field, in Dayton, Ohio, this sighting is listed as Unidentified.

Bloecher's entire Report on the UFO Wave of 1947 can be read here, and rest assured that it makes for some interesting historical reading for those interested in the UFO subject.

However interesting the finer details of UFO history may be (at least to some of us), one thing that likely isn't going away anytime soon (much like the Roswell story itself) will be the way mainstream commentators gloss over everything with such self-assurance. So just to help set the record straight: no, Roswell didn't single-handedly launch a "UFO craze." In fact, it was merely one small piece in a much greater movement that was already well underway at the time, and didn't begin to have a significant cultural impact on its own until decades later.

Okay, great... now that I've got that out of my system, I'll now return to blogging about other things... anything, in fact, but another blog post about Roswell!