The Great Los Angeles Air Raid: What Actually Happened, According to Witnesses

In the early morning hours of February 25, 1942, all hell was breaking loose in Los Angeles, California. America was still rattled by the attack by the Japanese Imperial Navy's attack on Pearl Harbor, and concerns about a legitimate threat on the U.S. mainland had kept military officials on the West Coast on high alert in case of an impending attack. On the night in question, gunfire erupted as officials struggled to discern the identities, and location, of several objects reportedly spotted in the early morning skies.

However, no evidence of an actual Japanese fleet ever emerged, as there had been no conclusive sightings of enemy aircraft, nor had anything resembling one been shot down in the melee that erupted that morning. President Roosevelt, upon being briefed about the supposed "incident", was reportedly very irked by the notion that a full-scale response of this sort might have been triggered by nothing more than "war nerves" in the aftermath of the Pearl Harbor attack.

Revisiting the incident many years later, a number of UFO researchers began to attribute this incident to the presence of some variety of unexplained aerial phenomenon. Namely, this appears to have originated from retouched photographs from the archives of the Los Angeles Times (as seen here), which seemed to emphasize a "saucer" shape object illuminated by spotlights. Also, some have asserted the mistaken interpretation that a single object, or a small group of them, had been continuously fired on for close to two hours, without appearing to display any damage. Hence, whatever the target might have been that American forces at Fort MacArthur had been firing at certainly hadn't been any kind of conventional aircraft.

It certainly remains likely that the target that evening hadn't been a conventional aircraft; in truth, the relentless pursuit of what actually happened that night has increasingly pointed to there being "no 'there' there," or in other words, that there hadn't been any kind of manned aircraft at all.

A number of years ago, an episode of the California based public television program California's Gold, hosted by veteran broadcaster Huel Howser, featured an episode dedicated to the alleged "air raid" that occurred in February 1942. California's Gold aired from 1991 until 2012, shortly before Howser's death the following year, and was produced by public television station KCET out of Los Angeles. Despite the program's spontaneous, "public access" feel, arguably this episode is one of the most fascinating presentations on the subject of famous Los Angeles air raid, as it presents multiple testimonies from eyewitnesses to the events that unfolded that night. 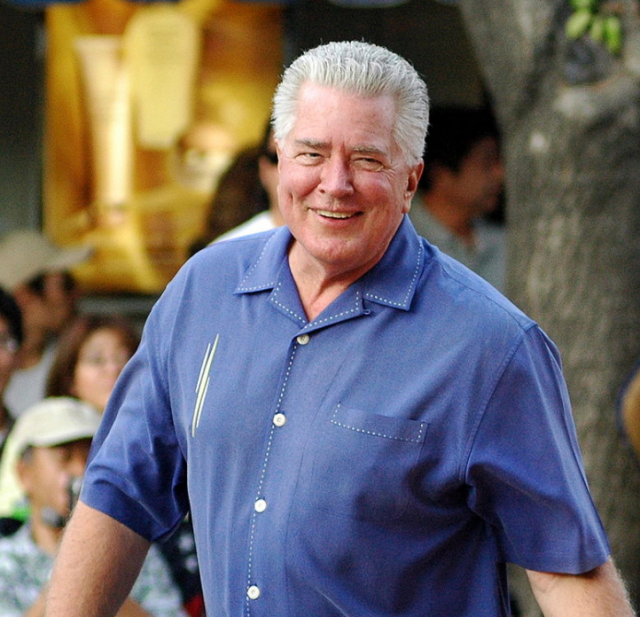 There were a variety of unique responses that Hewitt gathered from the witnesses, ranging from the fear they felt during the events that morning, to their direct observations of indistinct objects in the sky over Los Angeles in the early morning hours. Subsequent headlines that included statements like "LA Area Raided" appeared in the Los Angeles Times, among other papers, all of whom reported the incident along these lines: "Roaring out of a brilliant Western sky, foreign aircraft... flew over Southern California earlier today." But were there indeed any "foreign aircraft" that were observed that night?

What follows are some of the responses given to Hewitt by the former men and women that served on that morning, many of whom were stationed at Fort MacArthur in San Pedro, Los Angeles.

"We saw these lights all to the sky, and we hear these guns, but we couldn't see what they were firing at," one man recalled. Another described being at headquarters at the main reservation at Fort MacArthur, "and I assumed there were planes in very tight formation. You could see the antiaircraft fire. You could see the tracers." Still no mention of planes, however.

"I remember counting six or eight," one man estimated of the planes he counted, while noting that he couldn't tell if they had actually been Japanese planes or not. "I haven't the slightest idea. All they were was spots in the sky."

One very interesting piece of testimony provided to Hewitt came from a man who had been continually ordered to "fire", despite the fact that he couldn't actually observe any target. However, he further states that there had been a misfire at one of the stations, where a gun accidentally went off; this, he supposed, might have started the initial firing:

"I personally didn't see the planes," another man described. "I talked to the Navy afterwards. But I was up here at the Korean temple, and the base ring of a caliber fifty gun that's still there. And the executive officer at Fort MacArthur, Lt. Col. Snell, ordered me up here, and he said 'fire!' And I said, 'at what sir?' And he said, 'fire!'. And I hope he's not living and mad at me. But there were no planes, and later on, there was a gun battery of the 203rd Coast Guard artillery. And they were fooling around, and one of their guns accidentally went off. So that started it, and everyone was firing."

Others did claim they saw something, but that the object, whatever it was, had been fairly indistinct. "We all got out and watched it," one retired officer recalled. "We saw something, but it was nothing definite. Seemed to be something circling slowly around... I was standing next to my commanding officer, and he said 'it looks like an airplane to me'." 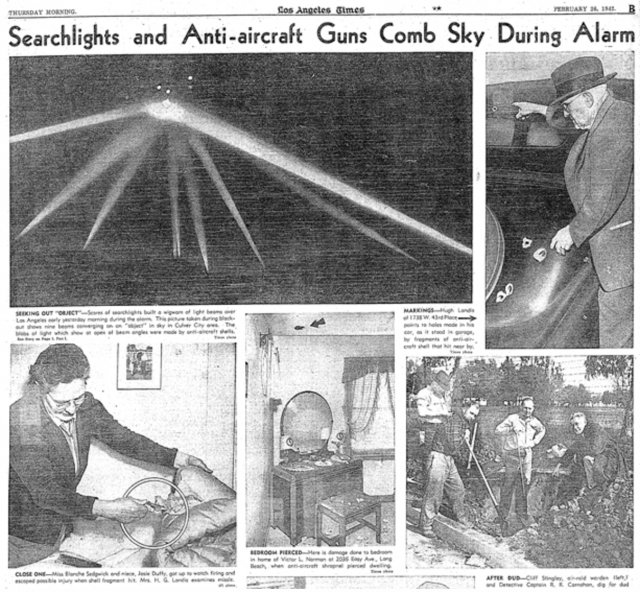 A radar operator who had been working at the time also recalled his experience. "I was a radar operator at Esplanade on Redondo Beach. We were called and told there was gonna be a target coming in. Our radar had a range of eighteen miles. We had to wait til that target got within our range. We picked it up finally, and we turned the lights on it; it was meteorologist balloon, with a wavelength of wire tied to the balloon, so that the radar would pick it up!"

So here, we have the first distinct description of an object, which had not only been traced on radar, but also observed with spotlights, and determined to be a weather balloon. "The purpose of that raid," the radar officer continued to explain, "and all the firing, was to see how many saboteurs they could find around the area. That was the main purpose for it!" In other words, it seems his interpretation had been that the incident had been aimed, rather than at meteorological balloons or Japanese aircraft, at simply weeding out individuals that might be operating covertly, by putting on a display of military strength in a presumed "raid."

"I have a different idea on this thing," another man explained, who said that he had been down at Fort MacArthur at the main reservation on the night of the incident. "There's one thing about all this newspaper stuff: it isn't any different now than it was then. They jump on it, and they put all of this fabrication in, so they can sell the papers! On top of that, they get people riled up a bit, and they'd say, oh we've gotta do better on this war effort. And of course, that's it. But there were no planes. I didn't see any planes, and I was out there for an hour at least."

The entire episode of Huel Howser's California Gold featuring these interviews has been archived here on YouTube.

So at least in the minds of those men and women who were actually on duty that fateful night in 1942, there was far less to the famous "air raid" of Los Angeles than many subsequent reports have claimed. Neither is there any mention of unidentified flying objects that comes up in the discussion, either. The consensus does seem mixed, and although some describe what could have been planes that were seen, at least one fairly clear observation of a meteorological balloon was presented, which is consistent with a 1983 Office of Air Force History analysis, which concluded that weather balloons were in position over southern California coinciding with the air raid, and had likely been one of the instigating factors.

So in this case, it may actually be--though I almost dread to say it--that the closest thing to a UFO seen here had actually been a weather balloon. But as far as there being anything of true mystery or intrigue in relation to the so-called "Battle of Los Angeles," the stories of those who witnessed it would seem to tell us otherwise.

Chinese Scientists Claim They Can Create and Clone Super Dogs