The Strange Hyena Men of Ethiopia

The hyena is truly a strange creature. While a member of the cat family, it shares the looks and many behavioral traits of canines. Its four species are very different – spotted hyenas kill what they eat while striped hyenas are primarily scavengers. Then there’s that laugh, which sounds so human and maniacal that it’s mentioned by Shakespeare in As You Like It and quite possibly earned the hyena a place in the Bible. Put that all together and it’s no wonder hyena folklore includes tales of witchcraft, grave robbing, child stealing and possession. However, that’s not enough to scare the Hyena Men of Ethiopia. The what?

Abbas Yusuf is believed to be one of only two Hyena Men in the world. Nepotism is accepted in this strange career as he told Reuters in a recent interview.

"My father is always thankful that I continued the good work he started and I will pass it onto my children when I grow old." 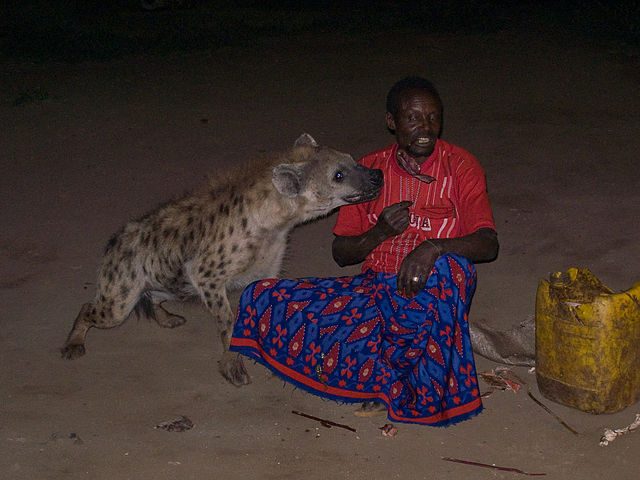 While his father, Yusuf Mume Salleh, ended his 45-year hyena-feeding job 13 years ago (a job he got from HIS father), Abbas and Mulugeta Wolde-Mariam, the other Hyena Man, have continued what many believe to be a centuries-old practice of feeding wild hyenas by hand – and sometimes mouth to mouth for tourists.

Abbas lives in the walled city of Haras in eastern Ethiopia and that’s where the practice of feeding hyenas is believed to have started. Perhaps this is a warning … the problems with the hyenas began with the construction of the 4-meter-high (13-foot) wall in the 16th century by Emir Nur Ibn Mujahid. It protected the city from invaders but caused a garbage problem as animals could no longer roam the streets eating organic waste. 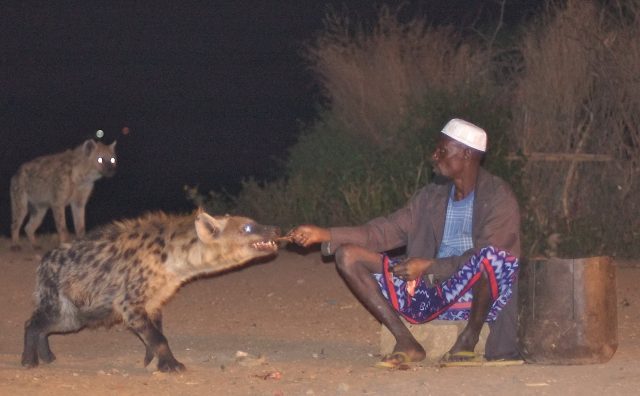 Enter the hyenas. Hyena gates were built in the walls to let the sanitation scavengers in. The practice worked and became part of the local culture as well-fed hyenas meant they weren’t eating livestock. In fact, locals began to predict good or poor harvests based on hyena weight. The holy day of Ashura commemorates this belief. On the other hand, the hyenas’ mysterious behavior and scary laughter led to the tales of kidnapped children and animal attacks.

"Hyenas have never attacked the people of Harar after my father started feeding them, unless you harm their babies."

To prove his point, Abbas says he has a baby hyena in his house that sleeps in his bedroom. Oh, and then there’s that mouth-to-mouth feeding thing. To show tourists at mosques that hyenas are harmless (and to get bigger tips), he lets them take raw meat from his own mouth. 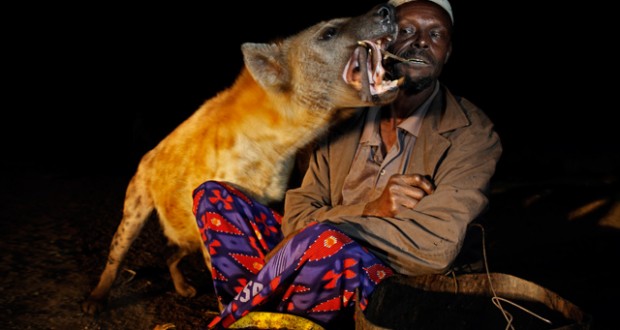 Is this all a show for visitors? Things seem to change once the tourists leave. Locals believe Abbas can speak to the hyenas and implore him to ask the animals to leave their cows alone. This Hyena Man seems to accept their trust and his fate.

"I am privileged by God to be a good friend to those misunderstood animals."

Levitating Rocks Photographed at Crystal Mine in Arkansas