This Big Hole in the Sun is Not a Good Thing

While NASA experts (and eye doctors) are warning that the upcoming solar eclipse is not something to look at directly, fortunately some NASA scientists are peering through their smoked glasses at the sun and what they see is ominous at best, apocalyptic at worst. What they’ve spotted is a 75,000-mile-wide hole that’s big enough to be seen from Earth, big enough to be given a name (AR2665), and potentially big enough to produce 'M-class' solar flares which can knock out communications satellites, create radiation storms and cause electronic chaos. This is not a good thing.

AR2665 has a lot of things to worry about. It was discovered by NASA’s Solar Dynamics Observatory between July 5-11, 2017, and, in a cautious statement from NASA, “seems to be growing rather quickly.” While that in itself is not unusual, the sun is in the “solar minimum” period of its 11-year cycle, which means there should be very little, if any, sunspot activity at all. AR2665 shouldn’t be happening nor should the smaller sunspots in its “group.” What’s worse, its core is the size of the Earth – the planet the sunspot is now facing … and threatening.

It’s not the hole that’s worrisome – it’s what comes out of them. A sunspot of this magnitude has the potential to create a solar coronal mass ejection (flare) like the 1859 Carrington Event which lit up the sky worldwide and knocked out the communications grid at the time – telegraphs – while giving operators electrical shocks. That seems quaint when compared with what could happen today if (and, as NASA warns, when) a similar flare hits the thousands of communications satellites currently in orbit and the electrical power grid that covers the Earth.

Is this giant hole a harbinger to a "Carrington-class" event? The last coronal mass ejection of that size was observed July 23, 2012, when its trajectory fortunately took it away from Earth. A lesser March 1989 solar storm knocked out power across Quebec. Should we be prepared for a planetary blackout disaster?

“It could be the source for some solar flares, but it is too early to predict just what it will do.” 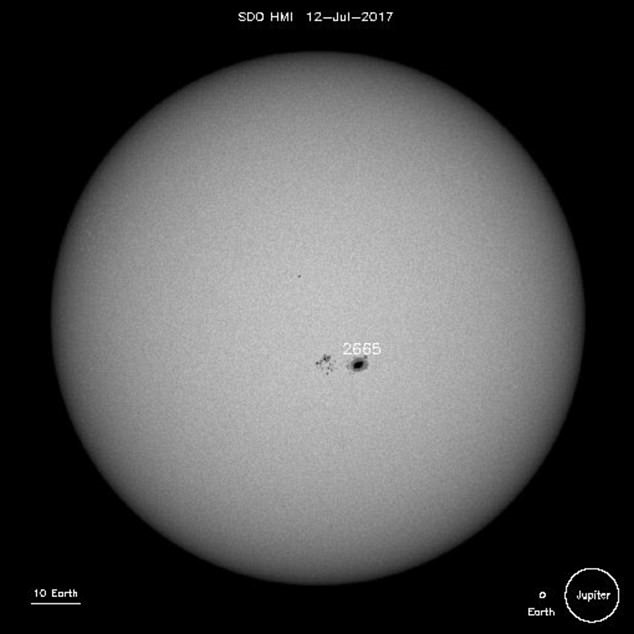 Forecasters from the NOAA (The National Oceanic and Atmospheric Administration) initially gave AR2665 a “25 per cent chance of M-class flares.” That doesn’t mean the fatal flares could hit Earth … but do you really think they’d tell the general public first? This is the 40th anniversary of the biggest blackout to ever hit New York City (it was caused by damage to lines at a nuclear plant, not flares) and the result was mass looting and destruction resulting in millions of dollars worth of damages. Estimates today are that the costs of a Carrington-class event today would start in the trillions and only go up. Do you think governments, financial institutions and big businesses want you to know the big one is coming before they’ve had a chance to hide their assets?

Something to think about while you’re not looking directly at the eclipse.

The Case of the Morphing Flying Saucer