Tower of Human Skulls is a Macabre Aztec Mystery

Oh, those crazy Aztecs. Just when you want to believe that maybe they weren’t so bad comes word from Mexico City that archeologists digging near the temple known as Templo Mayor have discovered a tower of at least 675 human skulls that had been long rumored to exist. What was also rumored was that the skulls belonged to conquered male warriors and were stacked, along with the rest of their skeletons, to form a rack of bones that was supposed to scare away the Spanish conquistadors. We now know how that turned out. Perhaps Hernan Cortes and his men might have thought twice about invading had they known what the archeologists just discovered … many of the skulls belonged to women and children.

"We were expecting just men, obviously young men, as warriors would be, and the thing about the women and children is that you'd think they wouldn't be going to war. Something is happening that we have no record of, and this is really new, a first in the Huey Tzompantli."

Biological anthropologist Rodrigo Bolanos, described the horrific and historic find in an interview with Reuters. The top of the tower was found appropriately in the chapel of Huitzilopochtli, the Aztec god of the sun, war and human sacrifice. It measures six meters (20 feet) in diameter and, despite finding so many skulls already, its height is unknown because there appear to be many more underneath.

The legend of the tzompantli skull and bone walls dates back to the writings of Andres de Tapia, a Spanish soldier under Cortes who also kept a detailed diary. His writings described tens of thousands of skulls in the Huey Tzompantli wall. 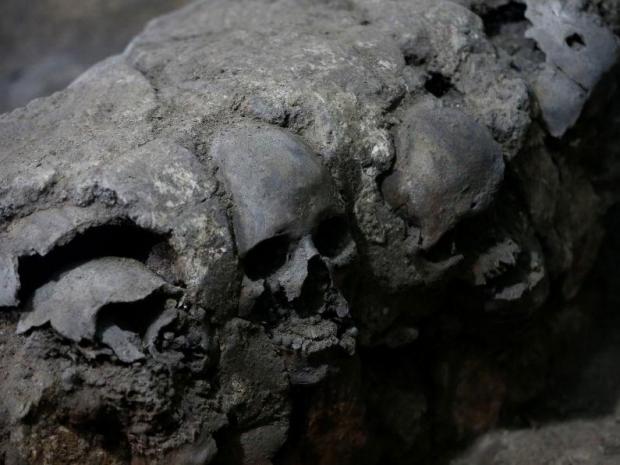 The Aztecs have always had a reputation for performing human sacrifice for religious rituals, sporting events and as a way of getting rid of conquered enemy soldiers. Those soldiers were always assumed by historians to be men, just like the Aztec warriors. That’s why the discovery of the skulls of women and children in the tower is a mystery. Did the enemies of the Aztec use women and children in their armies? Were the women and children sacrificed along with the male soldiers by the conquering Aztecs? Is there some other yet unknown reason for their presence?

The answers lie in the next layers of the mysterious and macabre tower of skulls that the archeologists at Templo Mayor continue to slowly and carefully excavate.

The British UFO Files: An Estimate of the Situation?