A “loud explosion-like bang,” “a flame of fire and then a rising pillar of smoke” sounds like a rock concert in the U.S., but in Siberia these days it means round up the reindeer and head for the hills … the mysterious craters are back, consuming the ground and leaving big holes behind at an alarming rate. Residents of the Seyakha village on the Yamal peninsula were shaken, figuratively and physically, by two huge explosions that took away more than their hearing.

“The hill has vanished.”

Reindeer herder Mikhail Okotetto told the Siberian Times of the birth of one crater “35 to 40 kilometers [21 to 24 miles] northwest of Seyakha” where an explosion on June 28 was followed by fire, smoke and “huge chunks of soil flying out of the epicenter.” You know things are bad when reindeer herders are familiar with words like “epicenter.”

The largest of the two resultant craters is 35 meters (114 feet) deep and 40 meters (132 feet) wide … for now. It’s expected that they will grow like previous craters due to erosion or more explosions. The sad news is, they knew it was coming but could do nothing about it, says Dr. Alexandr Sokolov from the Russian Academy of Sciences.

“This plot of land was absolutely flat just two years ago. A year ago in 2016 it bulged and we could see that soil has cracked there. The Nenets native people told us they saw fire in winter 2017, but it might mean January to March or April. In other words, it exploded when snow was still lying.”

The ‘bulge’ is a frozen mound of permafrost that is being pushed up by methane gas being thawed and released by climate change. Unfortunately, the methane doesn’t seep out gradually, which would still be bad for the environment but safer for the reindeer herders. Those methane gas fields are bringing in industry and development and big money is being spent on seismic equipment installed at scientific stations that picked up the latest crater births.

"On 28 June at 11.00.13 am local time, the seismic network on Yamal recorded a seismic event, probably associated with the release of gas. The oscillations are registered by two seismic stations located in Sabetta settlement and in the area of the Bovanenkovskoye gas field."

Seismic reports like these seem a little after-the-fact when reindeer herders and locals have been reporting suspicious bulges in the ground for months and at least ten huge craters and hundreds of smaller ones have burst into existence in this small area over the past few years.

Meanwhile, the ground continues to be replaced by huge craters. The day may be coming sooner than we think when the last reindeer herder looks over his shoulder and says: 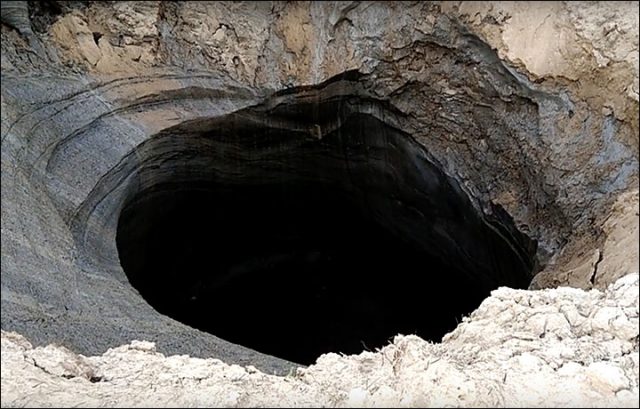 The Strange Tale of Albert Herpin, the Man Who Never Slept