A Chupacabra Conspiracy That Wasn’t

In August 2014, I trekked around Puerto Rico (on what was the ninth occasion) with a crew from Galafilm Productions to investigate the latest spate of Chupacabra encounters. It turned out not to be my only exposure to the chupacabra phenomenon in that month. Not long after I got back from the island, the blood-sucker and I crossed paths yet again. In a way, at least. And, also again, it was all thanks to the world of television. The researcher who called me said they were planning to make a series – for one of the "big channels" is how it was described to me – that would focus on a search for ancient treasures, hidden cities, lost lands, and priceless, missing artifacts. It was, then, to be a kind of real-life Indiana Jones-type series. So, what did that have to do with my work in the field of the chupacabra? Well, it went like this...

The company had somehow got its hands on a photograph of what appeared to be a crashed, old aircraft in the wilds of Puerto Rico. The excited researcher said the photograph was accompanied by a story. And what a story it was. No one, apparently, knew precisely where the shell of the aircraft was located on Puerto Rico, only that it was somewhere deep within the El Yunque rain-forest. And, if the lost plane could be found, it would blow the whole chupacabra mystery wide open. I asked: how, exactly, might it do that? The researcher at the other end of the line said they had a story, from a respected and trustworthy source on Puerto Rico, to the effect that at the time of the alleged crash, the crew of the aircraft was in the process of secretly transporting no less than five living, and extremely dangerous, chupacabras to a military base in the United States. Something, however, went wrong; terribly wrong.

Not long after taking to the late-night skies from the old Roosevelt Roads base, ground-personnel received frantic communications from the crew, to the effect that one of the creatures had broken out of its cage and was rampaging wildly in the body of the plane – which had been specially converted to allow for the cages to be placed on-board. The next thing that was heard was terrible screaming in the cockpit, then nothing but silence and the sudden vanishing of the aircraft from the military’s radar-screens. Despite an intense search, the aircraft was never found – which I found to be rather baffling. On an island the size of Puerto Rico, an aircraft crashes and the finest technology of Uncle Sam can’t find it?

Then, the researcher got to the point. Their contact had told them that as strong and as ruthless as chupacabras are said to be, it was unlikely that even they could have survived a tumultuous aircraft crash in the wilds of Puerto Rico. If the priceless treasure – the skeletal remains of the monsters that just might still be strewn around the body of the aircraft – could be found, the mystery of the chupacabra would be revealed and the existence of the creature would be proved. Yes, the stakes really were that high. I was then asked: would you be interested in trekking through El Yunque, trying to find the plane? Well, sure I would. It was then, however, that things began to unravel.

I asked if I could see a photograph of the plane. That was not a problem. Within seconds I was looking at a high-resolution Jpeg of what looked like the sort of aircraft that CIA agents would have used to secretly fly night-time missions in and out of Laos at the height of the Vietnam War. As the photo showed, the plane was in a severely bad state: the wings were gone, what was left was covered in grime, and the dense, surrounding, green vegetation threatened to overwhelm the rusted fuselage. That was great, right? Nope. It was time for me to share some bad news; some very bad news.

I told the researcher that the story the company had been given was pure and unadulterated bullshit. It turns out that, in decidedly synchronistic fashion, I had actually seen the aircraft myself, up close and personal, no less, years before. It was when I traveled to Puerto Rico in September 2005, with Paul Kimball’s Red Star Films company, on what was my second trip to the island. And the aircraft had not crashed, or even crash-landed. It had been owned by a company that, years earlier shuttled vacationers back and forth between San Juan and Miami, Florida. At some point, the company went broke and the aircraft was sold off to someone else. Then, eventually, when it became too costly to keep its aging form running, it was left to rot where it stood – which was not in the wilds of the rain-forest, but actually quite close to a pleasant little town. 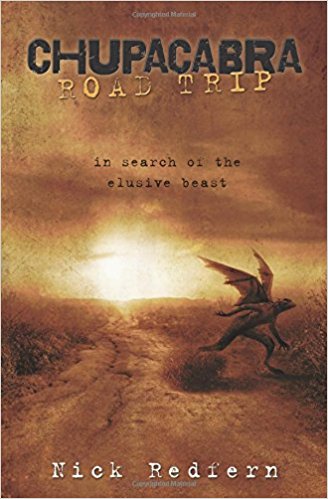 As evidence of this, within an hour, I dug out, scanned, and emailed my very own photo of the plane – taken in 2005 - that showed, in the background, a couple of buildings. You can see my photo of the aircraft on page 212 of my book, Chupacabra Road Trip. It was clear that whoever took the picture which had the production company frothing at the mouth, had done so very skillfully, and in a way that really did make it look like the plane was in the middle of El Yunque. I commented to the researcher that I hoped her company didn’t pay good money for the photo. The fumbling, stumbling reply of the researcher suggested to me that yes, the company did pay for it – and I’m guessing the fee was a fairly considerable one. The conversation was terminated; quickly, too. As, I’m assuming, was the plan for the crew to fly to Puerto Rico and check out the plane’s remains.