A Church in Brazil Removes Pigeons With Hypnosis

Fans of satirist Tom Lehrer will recognize these lines from his song, Poisoning Pigeons In The Park. Members of a Catholic church in Brazil may have agreed that it's not against any religion to ‘dispose’ of a pigeon but felt bad about the poisoning option, especially since their church was overcome with so many of the birds.

"The pigeons would come in here and do poop in everything, they would fly in the hour of Mass, I would curse and even throw balls of paper to try to frighten them, but they would nest on top and they would not leave at all." 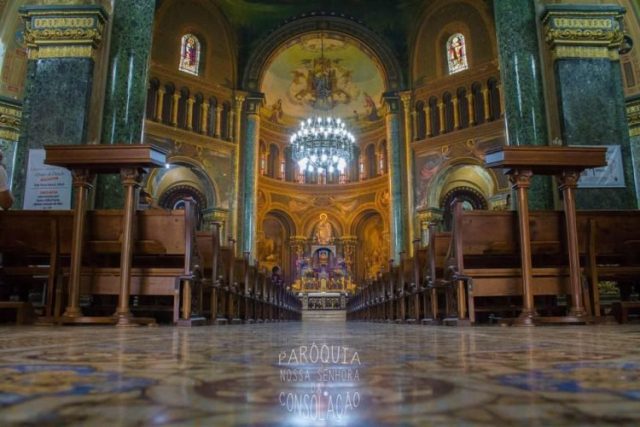 A secretary in Nossa Senhora da Consolação, a parish in downtown São Paulo, describes the scene during most masses. Father José Roberto Pereira, a parish priest, told the BBC that “the pigeons were breeding and making a lot of noise during mass” for the seven years he has been there. When all of their attempts to rid the church of the birds failed, they called in a pigeon exorcist. Or more precisely, a pigeon hypnotist.

A company called Protec has an unusual way to deter pigeons it claims to have imported from an unnamed source. Technicians installed large plastic panels painted with multi-colored bullseyes all around the outside of the church where the pigeons were entering – doorways, windows, belfries, gargoyle mouths, etc. The parishioners were probably ready to whack Father Pereira with one of those rainbow bullseye panels for spending their donations on them ... until a 'miracle' occurred.

According to the report, witnesses watched as pigeons trying to fly into the church suddenly began to act dizzy and nauseous and turned away. Coos spread among the local pigeon population and soon the birds were avoiding the church completely for the first time in years. Does Pope Francis know about this? Can an exterminator be declared a saint?

While Protec won’t reveal who turned them on to this mysterious technique, ornithologists doubt that the pigeons are being hypnotized or even being made nauseous by the bulleyes, especially since the shape doesn’t rotate or move. While birds really can be ‘hypnotized’ – magicians calm doves by holding them upside down and the Old Farmer’s Almanac advises chicken farmers with high-strung birds to use either the oscillating finger method or sternum stroke method (many of you non-chicken-farmers will be clicking on that link for other reasons ... shame on you) – these techniques require catching the bird first. Protec stands behind its pigeon-hypnotizing bullseyes but, to be on the safe side, it also installed screens and spikes in areas where the pigeons were making nests.

Whatever the reason, Father Pereira and his parishioners at Nossa Senhora da Consolação happily report that "the technique was 100% successful and no pigeons ever enter the church now.”

Perhaps Tom Lehrer could be lured out of retirement to update his song.