An Alien Being Spotted in a North Carolina Sewer (Again!)

What’s going on in North Carolina? In a span of just a few weeks, residents of the Tar Heel State have seen a Bigfoot that caused police across the border in South Carolina to issue warnings; a monster in Lake Norman; and a mysterious island rising out of the waters off the coast. Throw in another warning from nearby South Carolina that a Lizard Man who doesn’t recognize state borders might be on the loose during the recent solar eclipse and it’s a wonder everyone doesn’t pack up and move to … where? Just when North Carolinians start thinking that every state has problems and it might be best just to stay put, out comes a video mysteriously hidden since 2015 of what appears to be a grey-like alien peering out of sewer pipe. While it looks hazy, this isn’t the first time North Carolina has dealt with strange creatures in sewers. Is it time to act like a lover and head for Virginia?

Let’s look at the more recent sighting. The video is dated June 24, 2015, and this version was uploaded in March 2016, but there seems to be no other record or discussion of it until it popped up recently on a few websites. Most seem to agree that it appears to be from a newscast, the language is Spanish, the quality is poor, the reason for it not surfacing until now is a mystery, the location of the sewer or storm drain in North Carolina is not identified and the creature looks kind of like a grey alien under magnification if you squint and wish real hard. Without any other information, the needle on this one would seem to be placed between ‘questionable’ and ‘hoax’ … except this isn’t the first mysterious ‘alien’ creature seen in North Carolina sewers.

In April of 2009, a video surfaced of an “unknown lifeform” or “sewer creature” in Raleigh that was picked up on a ‘snake-cam’ in a sewer in the Cameron Village area. As the video made the rounds, the creature was referred to as a ‘poop monster’, a pulsating glob of slime and things not repeated in polite company. It appears to have been a sanitation department snake-cam because a response to panicked or at least curious residents came from Ed Buchan, environmental coordinator at the Raleigh Public Utilities Department, who identified the blob as a colony of tubifex worms. Better known as sludge or sewer worms, the creatures are rarely seen, live in sediment, eat bacteria and polluted organic matter that no other creatures will even look at, can survive with almost no oxygen and have reproductive organs that disappear after sex. If one was designing an extraterrestrial creature for a new movie, that sounds like a better alien monster than the one from the 2015 video. Even Ed Buchan, who has probably seen everything there is to see in sewers, was impressed.

“I’ve seen a lot of sewer TV before and I’ve never seen them. We were surprised. We didn’t know immediately what it was.”

Which one would you rather encounter? Here’s a better question … what are you doing in the sewer in the first place? 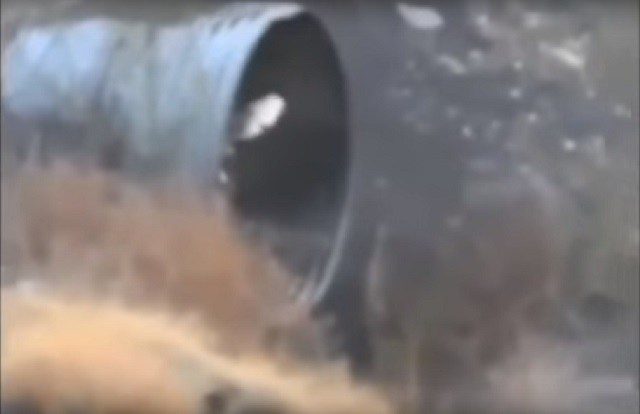 The Blob From The Lost Lagoon Surfaces in Vancouver