An Unknown Civilization Built a Great Wall of Siberia

Do countries or civilizations build walls to keep people out … or in? Would you change your answer if the wall in question was located in Siberia? That the quandary archaeologists and historians are pondering after the announcement of the discovery of what’s being called the Great Wall of Siberia. Before they can answer those questions, they first need to figure out who built it 3,000 years ago.

"These walls were clearly made to cut off crowds of people, and force them go through a narrow passage in the direction chosen by the creators of the (construction)."

Professor Andrey Borodovsky of the Institute of Archeology and Ethnography of the Siberian Branch of the Russian Academy of Sciences told The Siberian Times that the wall – actually a row of walls – was most likely built to control access from the northern steppes (grasslands) through the valley of the Katun River to the Altai Mountains. The existence of some sort of structure was known for some time but it’s invisible to exploration and study, even though it can be seen by satellite imaging, due to being buried by natural causes and man-made road building.

Borodovsky used a technology called Electrical Resistivity Tomography (ERT) to pinpoint the exact location of the walls. By penetrating the ground with electrodes and passing a current between them, ERT can differentiate between natural and manmade obstacles. The location confirms stories that much of the wall had been destroyed by the construction of the Chuya Highway which runs along the Chuya River until it meets the Katun. The original path was used by Russian, Chinese and Mongolian merchants. Construction of the road and destruction of the wall began in 1901. Stalin further buried the wall using slave labor to improve the road and expansion of the village of Souzga finished the job. 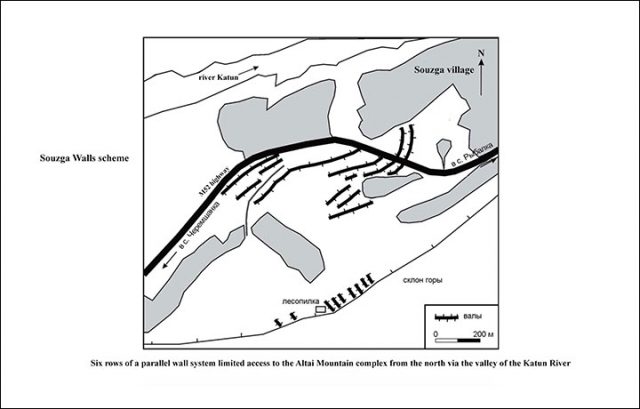 We know when it disappeared, but when did the wall appear? While the artifacts found near it are medieval, Borodovsky believes the Great Wall of Siberia dates to the time of the Great Wall of China and Hadrian’s Wall in England due to the improved technology of the early Iron Age and the politics (what a shock) of the times.

“This is the era of late Bronze Age and early Iron Age, including the Hunnish time on the eve of the Great Migration of Nations. Such a fortification process was due to a number of factors. First, the appearance of significant human resources in this era, thanks to the potential of an integrated manufacturing economy. Secondly, the aggravation of military conflicts and a significant increase in their scale. Thirdly, the formation of large state and proto-state entities, which had economic, cultural and political boundaries and these boundaries ... to separate their world from aliens.”

Borodovsky puts the construction of the wall in the first millennium BCE. That takes care of the what, why and when. All that’s left is the biggest mystery … who built the Great Wall of Siberia that stood up to 26 ft (8 meters) high and 33 ft (10 meters) wide?

The Altai mountains were home to the mysterious Denisovan hominids, but they died out long before 1000 BCE. Closer to that time at the end of the Bronze Age, the mountains were the focal point of what is called the Seima-Turbino Phenomenon, which was a massive migration of people from the region to Europe and Asia. Mummified human remains in the area showed that the Pazyryk people stayed put and this warrior culture may have been responsible for building the wall to control access and take a cut of the trade. That’s just one possibility and mores study is needed.