Chimps Have Learned to Play Rock-Paper-Scissors

This can’t be good news. Researchers at Kyoto University in Japan and Peking University in China have successfully taught chimpanzees of all ages and sexes to play the human game of rock-paper-scissors. If that’s not enough, they’ve taught the chimps how to play well enough to defeat some humans at the game. Sure, the losers are four-year-olds but this is how it starts. Next thing you know, they’re throwing the rocks, threatening with the scissors and demanding the paper be signed giving them equal rights under the Constitution. 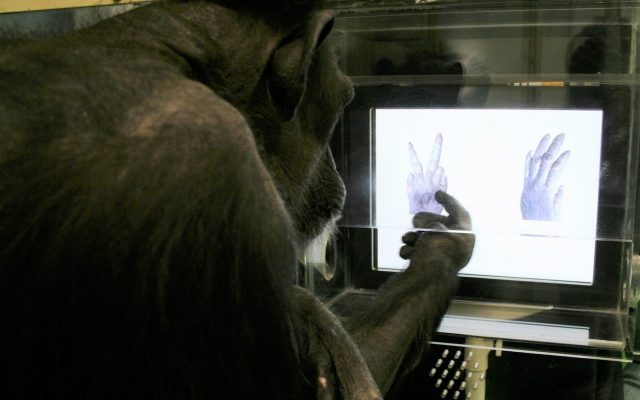 Seven chimpanzees from the institute were selected for the test (by some simpler selection method -- probably eenie-meenie-mynie-moe) and taught to recognize the hand signals on a computer screen. It would have been more interesting to teach the chimps to make the hand signals themselves, but who wants to go down in history as the person who taught chimps how to make a fist?

According to the report, five of the chimps learned the game after an average of 307 training sessions. (All of a sudden, training those summer interns at the office doesn’t seem so hard after all.) The hardest concept for them was scissors-paper. Researchers with seniority got to teach the game to 38 preschool boys and girls between the ages of three and six. They learned in about five sessions on average and kids over four were able to grasp some of the skills and subtle nuances required to win consistently.

At that point, the first battle for supremacy of the Earth between humans and chimps began. Cheetah from the Institute was in the red trunks and little Kim from Kyoto Elementary was in the blue. The referee warned them against hitting, biting and eye-gouging and checked their hands for illegal hangnails. The contestants returned to their corners to await the bell.

OK, it wasn’t quite that dramatic. Jie Gao compared the results of the chimps and the children playing against the computer and found that the chimps performed at about the level of human four-year-olds. Not surprisingly, that was the age when the human children began to win by skill rather than luck. The chimps didn’t care – they got their apple treats when they won a game no matter how it happened.

Is this the first step towards a chimp takeover? If so, is this a victory for the humans or merely a delay of the inevitable? When the movie Rock-Paper-Scissors for the Planet of the Apes is made, who should play the human who taught the chimps to always play rock?