Get Ready for a Real Flying DeLorean

As a fan of Back to the Future and Doc Brown’s DeLorean time machine as well as someone who still stops and stares longingly when a brushed stainless steel DeLorean DMC-12 drives by, this is the kind of news that makes one want to yell “Great Scott!”. The nephew of the famous car guru John DeLorean announced that the DeLorean Aerospcae DR-7 – a real flying car using the same kind of futuristic technology that went into the DMC-12 – is just months away from traveling the skies … and perhaps time? Where does the line start?

Paul DeLorean is the CEO and chief designer of DeLorean Aerospace, a company in Laguna Beach, California, with a mission John DeLorean and Doc Brown would both be proud of:

To bring the freedom and exhilaration of personal air transportation to the masses. With superior design and engineering, our advanced architecture provides a practical, elegant, and extremely safe alternative to conventional aircraft, with the convenience of airport-free access.

DeLorean’s biggest asset is his DNA. His uncle John started at the Packard Motor Company but became famous at General Motors, where he designed the Pontiac GTO muscle car, the Pontiac Firebird, Pontiac Grand Prix and (proving he was human) the Chevrolet Vega subcompact. Then he became infamous by starting his own car company to make the gull-winged DMC-12. John’s father and Paul’s grandfather, Zachary DeLorean, emigrated to the United States from Romania and eventually worked at the Ford Motor Company factory in Highland Park, Michigan, where he was also a union organizer. Needless to say, transmission fluid is in Paul DeLorean’s blood. 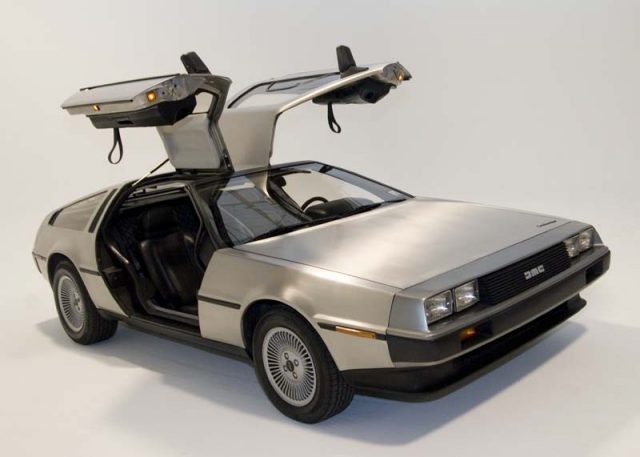 DeLorean Aerospace was founded in 2012 to build a flying car or, in somewhat Doc Brown-ish technical terms, a two-seat vertical takeoff and landing (VTOL) personal air transport vehicle. Accrdoing to the website, the DR-7 combines a “zero-emission modern electric power system with a lightweight yet highly stable platform” and will contain a wide variety of futuristic innovations. Not to mention good looks, or as Doc Brown might say, “The way I see it, if you're gonna build a ‘flying’ machine into a car, why not do it with some style?”

The DR-7 has been designed with a number of unique technologies for improved safety and overall functionality. With an industry-first centerline twin vectoring propulsion system, stall-resistant canard wing, and multiple patent-pending features, our aircraft is intrinsically safer. With an incredibly low drag coefficient, the DR-7 maximizes range under fully electric power.

The DR-7 will be 20 feet (6 meters) long and 18.5 feet (5.5 meters) wide with wings that fold in so it can be parked in a large garage. A one-third scale model has already been built and DeLorean is now working on a full-sized, fully-functional prototype that he claims will have a range of 120 miles per charge and be ready within a year.

At DeLorean Aerospace, we are actualizing the dream of practical and accessible air mobility with our DR-7 aircraft.

As Marty McFly would say … “Whoa!” All that’s left to answer is when and how much. The prototype is expected to be flying sometime in 2018. And the price? For now, you’ll need Doc Brown’s DeLorean to find that out.

The Most Mind-Bogglingly Weird Alien Encounters