I’m a big fan of gargoyles – those creepy, monstrous carvings sticking out of the sides of Gothic churches and buildings – so a recent report of what was described by the witness as a living gargoyle sighting in Spain was bound to catch my eye and pique my interest. Which of the scary monsters did this witness see? Did it have water shooting out of its mouth? Was Sigourney Weaver around? Could this be what’s being spotted recently in Chicago?

“It looked like a dog with wings. I couldn’t see the front legs, just the rear ones. It didn’t have front legs. ”

The report comes from Cryptozoology News which interviewed Alex Nasirc, a British man who claims he saw the creature while living in Santa Maria Del Aguila, Almeria, in southern Spain in September 2010. Nasirc says he heard an unidentifiable sound around 1 am that he feared might be a woman shrieking in pain. Looking out of his fourth-story window, he saw a large winged creature about 25 meters (82 feet) away take off from the building and fly off. He didn’t think he had time for a photo (damn) but committed this description to memory:

“Thick, short beak. It looked like a carnivores’ nose. The head seemed to be stretched at the back. Bulky torso or body. Curved wings with arms look alike. Span around 2 to 3 meters wide — about 9 to 10 feet –. Thick, powerful back legs that were held diagonally, almost vertically. Long, thin tail. Heavy, slow movement. Pale pink color. Size of a massive dog or a big feline like tiger or lion. It looked like skin texture. No feathers. No scales. It almost moved like a robot.” 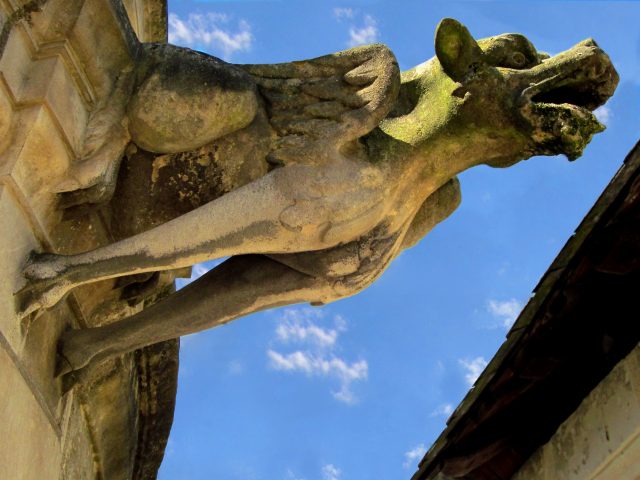 Since the creature Nasirc claimed to have seen flew, that rules out a ground-based Dogman, but the rest of the depiction could easily describe a gargoyle. One legend is that the French St. Romanus slew a flying, fire-breathing, town-terrorizing dragon-like monster named Gargouille around 640 CE and, when it was not consumed by the fire that burned the rest of its body, Gargouille's long-necked head was mounted on a church to scare off evil spirits. The word “gargouille” means throat or gullet and that fits it being associated with the long spouts used to carry water away from the roofs of medieval churches. The grotesque monster and animal faces placed on the ends of the spouts were there to ward off evil spirits or to attract evil-loving pagans to the services. 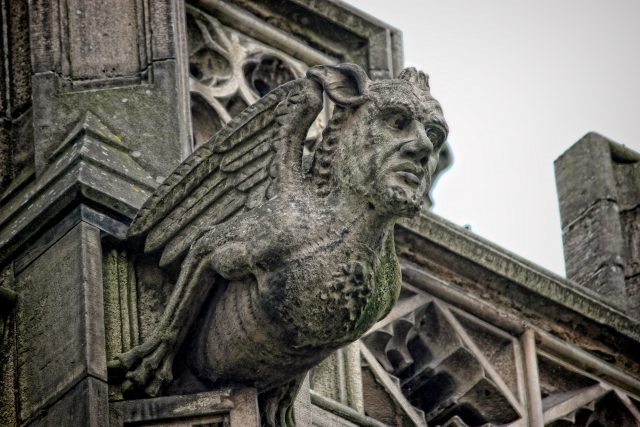 While the most well-known gargoyles on French cathedrals do look like dragons or winged dogs, they can be any scary animal or fake animal or even scary humans. Outside of the dragons, the gargoyles don’t seem to be based on any other cryptids, but Mothman, the Jersey Devil and some other modern monsters could easily make excellent gargoyle models.

Could the Chicago Phantom be some sort of living gargoyle? Most descriptions of the 33 sightings (to date) meticulously catalogued by Lon Strickler at Phantoms and Monsters seem to liken it to a flying humanoid, giant bat or Mothman-like creature. At least one report put the creature on a building before taking off. Chicago has over 200 Catholic Churches. Has anyone checked them to see if there’s a gargoyle missing? 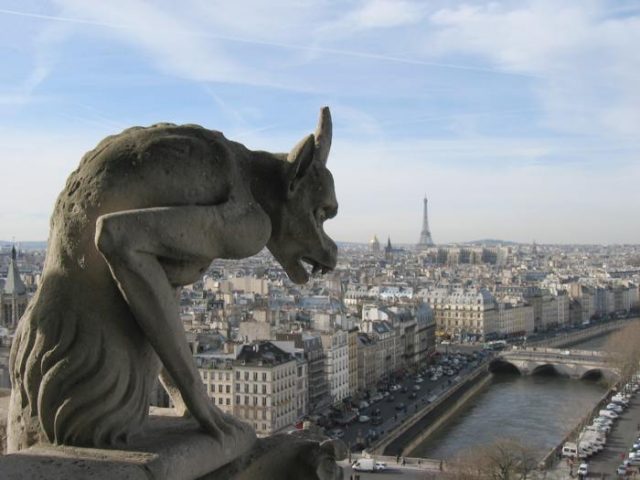 It doesn’t appear that Alex Nasirc ever saw his living gargoyle again. What did he see? Is it living in Chicago where the food is better and there’s more churches to hide on?