Over the years, numerous theories have been put forward to try and explain what the creatures of Loch Ness, Scotland may be. The theories range from paranormal monsters to giant eels, from huge salamanders to giant frogs and from sturgeon to catfish. Certainly, the most popular theory is that the beasts are plesiosaurs - marine reptiles which went belly-up millions of years ago. Although the plesiosaur is seen as being the most popular theory, it's actually a stinking, rotting pile of complete rubbish - for these reasons. Yes, it would be wonderful if the monsters proved to be plesiosaurs - and especially so for Scotland's tourist industry, which would be foaming at its collective mouth. But, they're not, so deal with it and move on.

It's worth noting too, though, that strange water-based beasts are not the only mysterious creatures said to roam around Loch Ness and various nearby locations. From 2000 to 2001, the area was hit by a series of sightings of large, unidentified black cats. On May 2, 2000, the Inverness Courier newspaper splashed the first such story across its pages. It was a story written by Calum Macleod and provoked a great deal of anxiety and unease among the locals, which is not surprising, given that the article was titled 'Big Cat Sighting Sparks Lambing Time Farm Alert.' As the Courier noted, it was John Cathcart, a wildlife liaison officer with the Northern Constabulary, who brought the matter to everyone’s attention, and which was prompted by sightings of a puma, and of numerous sheep found savagely mutilated and killed.

Two months later, it was Kiltarlity that became the focus for the savage beast, or of another of its kind. Three sheep were killed in violent fashion and locals spoke of seeing a huge 'panther-like' animal prowling the landscape by both day and night. One farmer who was hit hard was Davie MacLean, of Boblainy, who lost two lambs and a ewe. The heads of the poor animals had been severed from their bodies, their skins lay strewn around the site of the attack, their ribs were “gnawed bare,” and their legs had been snapped off at the joints. It was a terrifying and traumatic sight for MacLean.

Then, in September 2001, a similar account reached the staff of the Nessie’s Loch Ness Times. The witness in this case was one David Straube, a forestry civil engineering worker, who encountered the creature on the fringes of woods at nearby Huntly. At the time, Straube was driving his vehicle – and checking the road near Kinnoir Woods for any defects – when, as he rounded a bend at approximately 11:30 a.m., he came face to face with a huge black feline which was described as being very much like a puma. It wasted no time in bounding off into the trees. But not before Straube was able to take a good look at the animal and fairly conclusively identify it for what it was. 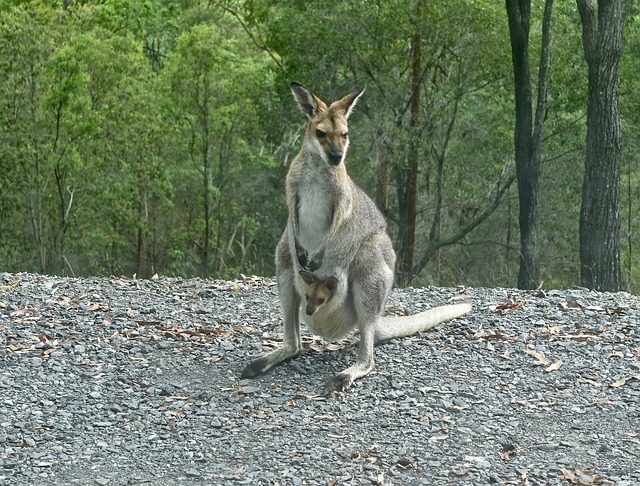 On top of that, I have several reports of people seeing wallabies at Loch Ness. As strange as that might seem to many people, there is actually quite a plausible explanation for this. Indeed, wallabies are known to have escaped from England-based private enclosures over the years (and decades) and which live very nicely in the wilds of the countryside. Here's one example and here's another one of wallabies gone wild in England. Such accounts surface quite often. As for Scotland, well...definitely none confirmed for sure at Loch Ness, but there is this.

And, for anyone who might be able to shed some light on the final story (for or against), I have a solitary story, from an equally solitary source, who claims to have seen a pink flamingo standing by a stretch of road at Loch Ness in 1986. No, it's not April Fools' Day! I guess it's not impossible, as flamingos do escape and manage to thrive very well. Here's one such case - of a flamingo that made a successful bid for freedom in 2005 from a Wichita, Kansas Zoo, and which was verified as being seen off Port Lavaca, Texas eight years later. Of course, the weather in Texas is far more appealing to a flamingo than Scotland! But, who knows? I'm very much inclined to think that this latter case was either a hoax or mistaken identity (but of what, I haven't got a clue). Although, I find it far more likely that a flamingo could be living at Loch Ness than a plesiosaur!

Goat-Humans, a One-Eyed Pig Monkey and a Blood Red Fountain