In the last week, three people have contacted me with eerily similar stories. Or, rather, with eerily similar nightmares. On August 8, I received a Facebook message from a guy named Kenny, who had a horrific dream of nuclear war two nights earlier. Kenny lives in San Bernardino, California and woke up suddenly in the dead of night in a state of terror. As Kenny explained, in his dream he was sitting in the living-room of a house in a small town outside of Lubbock, Texas. Kenny had no idea of the name of the town, only that he knew it was near Lubbock - a place he has never visited. In the dream, Kenny heard a sudden and deep rumbling sound that seemed to be coming from somewhere faraway. He went to the screen door, puzzled, and peered outside. To his horror, Kenny could see way off in the distance, the one thing which none of us ever want to see: a huge, nuclear mushroom cloud looming large and ominous on the horizon.

Kenny continued that, in his dream, he was rooted to the spot, his legs shaking and his heart pounding. He could only stand and stare as the huge radioactive cloud extended to a height of what was clearly miles. The entire sky turned black and suddenly a huge wave of flame and smoke - hundreds of feet high - raced across the entire landscape, completely obliterating everything in its path. In seconds, there was another explosion, again way off in the distance, but from the opposite direction. Nuclear war had begun. That was when Kenny woke up - thankful that it was all a dream, but disturbed by the fact that, as Kenny told me, the dream seemed like something far more than just a regular dream. Kenny felt he had seen something that was still yet to come: a glimpse of the near future.

Kimberly J emailed me on August 10 and shared with me a story of disturbing proportions. She lives in Chicago, Illinois and had a somewhat similar dream to that of Kenny, but on August 9. The scenario was almost identical: a gigantic explosion destroyed her home city, killing millions and vaporizing everything for miles. A huge mushroom cloud was hanging where, only seconds earlier, there had been a bustling city of close to three million people. In this case, however, there was more: amid the carnage and the chaos, a large "birdman," as Kimberly described it, hovered over the massive cloud, "watching the end of us."

On June 7 of this year, M.J. Banias wrote an article here at Mysterious Universe titled "Chicago’s Current Mothman Flap 'A Warning,' Says Expert." In his article Banias described a recent (and still-ongoing) wave of Mothman-type sightings in and around the city. The article quotes researcher Lon Strickler, who has looked into these particular cases: "There are many opinions as to why these sightings are occurring, including a general feeling that unfortunate events may be in the city’s future...At this point, I feel that this being may be attempting to distinguish a connection between locales within the city and future events. The witnesses have been very steadfast with what they have seen, and refuse to embellish on their initial descriptions. Each witness has had a feeling of dread and foreboding, which I believe translates into a warning of some type."

Then, on August 12, I received yet another Facebook message of a similar nature; this one from Jacob, an American who is now a resident of Mulhouse, France (oddly enough, it's a city I spent a lot of time in during my teenage years). In Jacob's dream, an emergency broadcast message appeared on his TV screen, warning people to take cover: the nukes were flying. And that was it: just a few, brief, seconds of mayhem in the dream-state. But, it was still an undeniably nightmarish night for Jacob.

Of course, all of this could be as a result of the growing tensions between North Korea and the United States. In fact, I'm sure that has a great deal to do with it. On August 9, the U.K.'s Independent newspaper ran an article on the North Korea issue which stated, in part, that: "While it’s unclear if North Korea can successfully target US cities like Denver and Chicago with a nuclear ICBM, it’s similarly unknown if US defense systems can strike it down — adding to American anxieties." The issue of Chicago being a possible target has been mentioned in multiple news outlets. Such stories almost certainly would have been worrying to Kimberly J, who lives in the heart of the city. 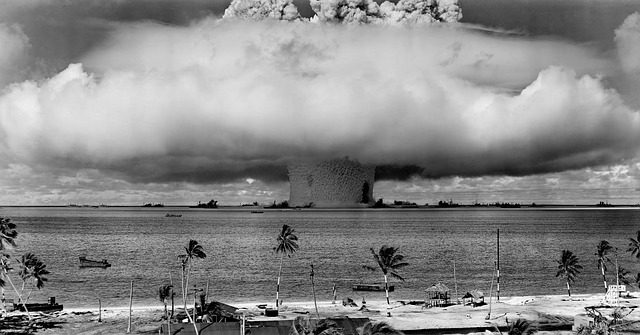 Should we be concerned that three people have, in the last week, had nightmares about nuclear war? Probably not. I wouldn't be surprised if hundreds of people - all across the world - have had such dreams. Maybe even more. After all, the climate we are living in right now is hardly a stable one. It's a time of madness. On the other hand, Kimberly's sighting in her dream of a Mothman-type creature - which has been seen around Chicago in the past few months and that has been linked to a possible looming disaster in the area - will likely lead some to believe that there is more to all of this than just bad dreams. There is also the fact that I got a cluster of such reports across a very short period of time. I experience a lot of such odd clusters. Here's one of many, which concerns the Men in Black.

If anyone reading this has also recently experienced something similar, you can contact me here.

Rare White Moose and Pink Dolphin Seen in the Wild