Naked and Afraid: Wild Men, “Grease Devils” and Other Oddities

Legends about "wild men" are a common feature throughout many (if not most) cultures around the world. While the idea of a hairy, ape-like chimera like Sasquatch immediately comes to mind, in some instances that involve the Wild Man mythos, these creatures are much more on the human side of the mythic spectrum.

In fact, the idea of feral humans, or people living completely wild and "off the grid," has been floated in a few cases as possible explanations for Bigfoot sightings. While they may not always offer logical alternatives to giant manlike monsters roaming our woodlands, the idea of feral humans remains an intriguing one, and there are at least some good reports that involve such things.

In Jeffery Scott Holland's book Weird Kentucky: Your Travel Guide to Kentucky's Local Legends and Best Kept Secrets, the author features a small collection of feral human reports, including one very intriguing case which he experienced personally. The incident occurred in the Spring of 1990, near Slade, Powell County, in the scenic Red River Gorge.

The author encountered, face-to-face in the wilderness near Cloudspliltter Rock, an adult (in his thirties) Caucasian male, walking in the woods, naked but covered with mud, leaves, and vines, which were matted into his hair and beard as well, giving him an almost absurd "ZZ Top turned Swamp Thing" appearance. He walked with a hunched/ apelike gait. He spotted me moments after I spotted him, and we stared at each other for what at the time felt like an eternity. Finally he turned and fled. His eyes seemed to show some intelligence, but he was still extremely animal-like and seemingly unable to speak. I made no effort lo follow him.

"I have heard similar stories over the years from locals in Slade about old "Mountain Men" who have lost their minds," Holland adds, "and are now living deep in the wilderness, reverted to an animal-like state." Along with this personal encounter, Holland's book features two additional reports of alleged wild men seen elsewhere in the region.

Such stories, while uncommon, aren't relegated to the foothills of the Ozarks. An odd rash of incidents involving an oily, bearded, and naked man seen by locals in New Jersey throughout the early part of the last century made headlines near the town of Bergen, New Jersey. The first installment of this peculiar ongoing story appeared in the the Bergen Record in 1935, as told by a Mr. Harry Quackenbush, who along with four friends had been walking alongside the trolley terminal at Zabriskie’s pond near Main Street one evening in 1917. On this particular night, there had been a full moon, which provided nearly perfect visibility. Soon however, the group of friends spotted something none would have anticipated, nor wished to see.

“It was a man," Quackenbush recalled, "but huge, massive. And he was naked and white. But this whiteness was sort of dulled by something. I couldn’t make out just what.”

The group watched this naked individual for several minutes before he reportedly dropped down on all fours and fled, in a way resembling that of an animal. The group watched, stunned, as this wild-looking man "galloped off through the high grass along the edge of the road, along the tracks," leaving nothing behind but bare footprints that marked his path. 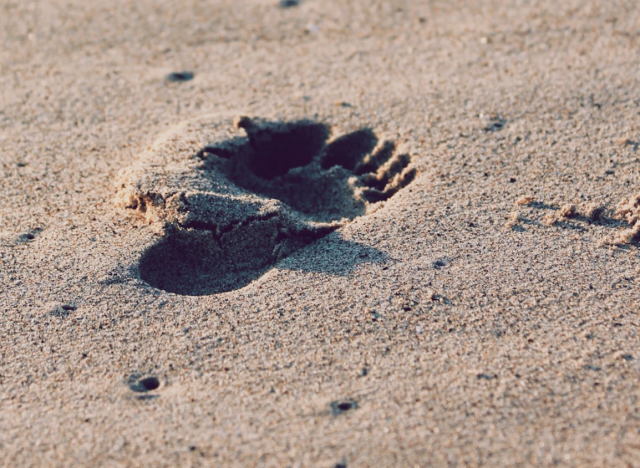 Heading in the same direction the strange phantom fled on their way home, they once again encountered this individual, who was purportedly in a sunken barrel of oil by the railroad tracks, "up to his neck, his hands grasping the outer edge, and moving around in the oil.”

The unsettling incident was perhaps the first of what became known as encounters with "Oily Oliver," as the degenerate had been so-named by the conductor and motorman on the trolley, who seemed well aware of the fiend when Quackenbush and his company reported it to them. Similar stories would persist on up into the 1960s, including one encounter two women had while visiting a cemetery, during which they observed a naked, oily man creeping through the weeds toward them. Had it been the same "Oily Oliver" that Harry Quackenbush and his companions first observed as far back as 1917? If so, why was this frightening prowler--still a naturist, apparently--on the loose so many decades later (and presumably an old man by now)?

Apart from its relevance to scattered reports of feral people in America, "Oily Oliver" bears some similarity to peculiar folk beliefs in Malay cultures that involve "grease devils," phantom attackers that cover themselves in grease which makes them slippery, and thus able to evade capture more easily.

By comparison, the story of a naked prowler that bathes in railroad oil does bear some similarity to the Indonesian grease devils, on the one hand, while possibly more likely to have been a deranged individual with a bizarre penchant for dousing himself in oil... before scaring the daylights out of unsuspecting locals in New Jersey.

As an interesting footnote, the 1935 article in the Bergen Record that shared the story of the oily fiend featured a photo of a rough-looking individual, identified as Samuel Snyder, who had purportedly been living almost in a feral manner in the woodlands outside of town, where he was purportedly a long-held object of pursuit by local authorities, who hunted him "like an animal." His photo in the Record featured Snyder as a bearded, unkempt creature with long fingernails, who purportedly lived by stealing food off the porch of his father's home nearby. While it was proposed that Snyder had been a likely candidate for New Jersey's very own "grease devil," his appearance, and the description of his behavior, would certainly qualify for being one of the feral human reports that turns up from time to time.

Are there really people that, for whatever reason, go off the grid (or perhaps just out of their minds), which can explain some of these bizarre encounters with "phantom naturists," the likes of Oily Oliver?

Nominee for Chief Scientist Once Saw a 5,000-MPH UFO