Rare White Moose and Pink Dolphin Seen in the Wild

What’s better than seeing a rare pink dolphin in Louisiana? 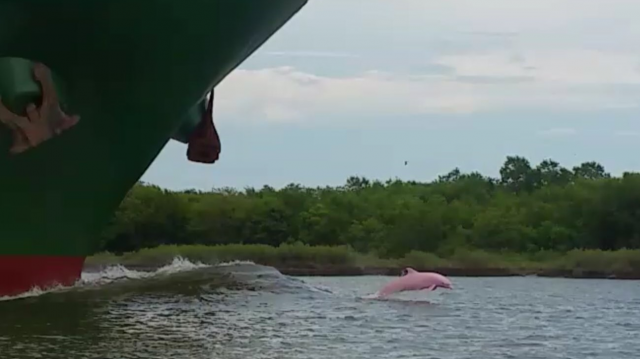 How about spotting a rare white moose in Sweden? Better yet, how about going back a second time with a camera and being lucky enough to find it again and record the white moose so that we all can get a glimpse of one of these unusual creatures?

This is not to take anything away from Pinky, the albino dolphin with the pink hue. Pinky was first seen in the Calcasieu Ship Channel between the city of Lake Charles, Louisiana, and the Gulf of Mexico back in 2007 and, while extremely rare, has managed to survive and come back annually -- including last week -- and become a local tourist attraction.

The rare white moose (called elk in Sweden) is not an albino but is still stunningly white all over. Hans Nilsson knew there were about 50 of them in the western part of the Varmland providence and had narrowed his search to the Eda region on the Norwegian border. After finally seeing one last week, he went back and got the video.

"This white elk bull is local to the area. I saw it the evening before too, that was the first time. On Friday evening when I shot the video everything fell into place, the location, the light and the calmness. It was an experience to meet such a stately animal up close."

While the color is from a genetic trait, a sighting of a white animal has spiritual connotations among many cultures. Although the name is similar among many Native American tribes (moz in Abenaki, mus in Maliseet, mooz in Ojibwe, mos in Mohegan) and the moose was regarded as symbol of endurance, there are few folk tales of the white moose similar to those of the white buffalo. However, the killing of a white moose in Nova Scotia in 2013 caused members of the indigenous Mi’kmaq community to demand the hide. They believe that white animals may be spirits of their ancestors and they put the hide on an altar where offerings and prayers were made to help release the spirit. It’s likely there are similar beliefs among the indigenous populations of Sweden, Finland, Norway, Latvia, Estonia, and Russia where the Eurasian elk and their rare white members roam.

While the pink dolphin in Louisiana has no spiritual meaning, the Amazon river dolphins – which turn pink as adults – are believed by Amazon natives to be shape-shifters that occasionally come ashore at night as good-looking humans to have sex. And of course, there are the ubiquitous beliefs that the body parts – particularly genitalia – of any albino creature have aphrodisiac or healing powers. This is yet another reason why we can’t have nice things.

As far as we know, Pinky and Hans Nilsson’s white moose are still alive and free.