The small fishing town of Gimli, Manitoba sits on the south western shore of Lake Winnipeg in Canada's prairie region. Settled over a century ago by Icelandic settlers, the town has strong ties to the folklore and mythology of Iceland. Last week, the town officially opened a park to commemorate its long heritage, and to ensure good fortune, they built homes for elves, the Icelandic 'hidden people,' known as huldufólk. 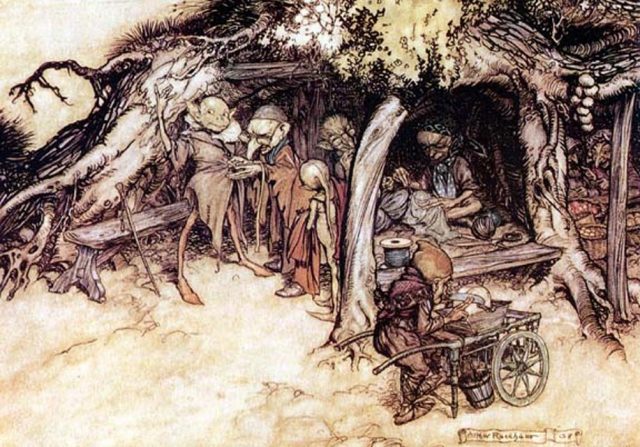 Hidden among the park's many rock gardens are small little homes designed to house these mysterious little people. The huldufólk have a long history in Iceland. Original stories of these beings date back to a millennia ago, primarily in Viking mythology, which came to Iceland around 1000 CE.

Huldufólk, according to the stories, are similar to humans. They are smaller, wear old fashioned clothing, and live outdoors in rocky nooks and caves, but they buy and sell goods, farm, fish, eat, sleep, and drink alcohol like everyone else. They are generally kind and peaceful, but many stories tell of mischief, and in some cases, really malevolent kidnappings that would get you tossed into a maximum security facility.

In much of the folklore, they want to be left alone to live their lives, and only become upset when humans interfere or destroy their homes. In fact, Icelanders generally take them quite seriously. In 1982, a NATO base was picketed when Icelandic locals demanded a proper survey be done of elven homes on the base. In 2004, an aluminum smelting company was forced to cease construction on their factory until a government official was sent down to inspect the construction area for wee elf houses. There are many cases of construction sites being meddled with, tools missing, and strange malfunctions to equipment that have also been reportedly caused by these magical people.

In a few tales, the Huldufólk have been known to steal human babies and replace them with changelings. One encounter, according to an old folk tale, had a man's dog be brutally dashed against the ground during an elven New Years party. Friendly or not, these little guys are not to be trifled with.

It makes perfect sense for the Canadian town of Gimli, steeped in Icelandic heritage, to build a few rocky houses for some guests of the elvish variety. Some would say, it is better to be safe than sorry. The town also recommends you probably keep an eye on your kids, and leash your dogs...