Some See a Smartphone in a Painting of a 1630s Scene

One thing some believers or wannabe believers in time travel point to as evidence of its existence are old photographs that look exactly like famous people today. Nicholas Cage and Vladimir Putin seem to be popular examples of this phenomenon, but old photos have also been found of people who look Jay Z, Brad Pitt and Keanu Reeves. (Is it just me or is this also a list of celebrities people wouldn’t mind seeing travel to another time permanently? And why don’t women seem to time travel? Is this another glass ceiling they haven’t broken through yet? Asking for a friend.)

Another thing used in attempts to prove time travel are old photographs showing modern devices like televisions, cars and cellphones.

While a photograph of a smartphone in a pre-cell era might seem believable, a painting of one? Not so much. And, if the painting is of a nearly 400-year-old scene depicting Native Americans and one seems to be looking at a smartphone as if getting ready to make a call … is this proof someone sent an iPhone back to a tribe to help improve their communications and keep their land?

That’s what some people are speculating about a mural painted in 1937 by the late Italian painter Umberto Romano called "Mr. Pynchon and the Settling of Springfield." Located on the Commonwealth of Massachusetts State Office Building, formerly the original Post Office in Springfield, Massachusetts, the mural is said to depict an actual 1630s meeting in the village of Agawam between the Pocumtuc and Nipmuc tribes and early English settlers. While the object held by the Native American in the lower right hand corner may have puzzled many people studying the mural, anyone alive after 2007 immediately recognizes his pose as someone who is checking messages on a smartphone … a smartphone from the future. 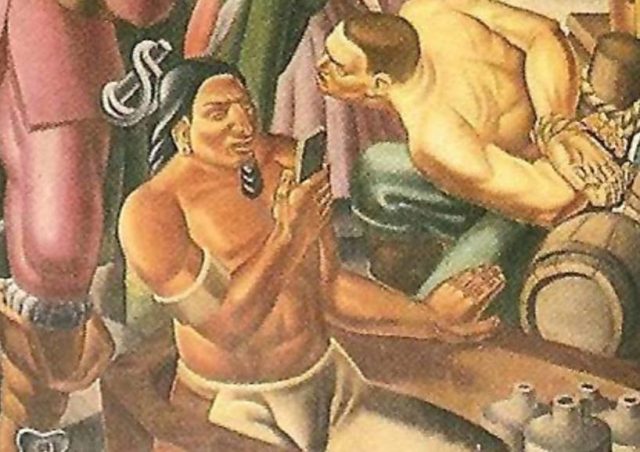 Yeah, right. Even believers have a tough time swallowing a painting of an event 300 years in the past as proof of time travel. The painting has been making the rounds this week and some are suggesting it’s connected to the upcoming launch of a new iPhone on September 12th, the 10th anniversary of the debut of the original.

So what is the man looking at? In an interview with Motherboard, historian Daniel Crown first points out that the man in pink is William Pynchon – the author of the first book ever banned and burned in what is now America (The Meritorious Price of Our Redemption) and the ancestor of living novelist Thomas Pynchon. Crown is a Pynchon expert and thinks he could be giving the native a mirror or a pocket Bible. On the other hand, Dr. Margaret Bruchac, a Native American expert at the University of Pennsylvania, thinks it’s the handle of an iron blade with the blade itself hidden by the man’s hand. She’s not a big fan of the accuracy of the painting, saying: "This artist obviously had never seen many of the objects he depicts."

If it really is a phone and it’s not evidence of time travel, maybe Umberto Romano was implying that the phone was transported back in time by magic. Did anyone notice the witch flying in the upper right-hand corner?

The Paranormal: Mistaking Fiction For Fact