During a nighttime UFO "sky watch" that I participated in a number of years ago, I recall a crowd of observers that were standing near me, who became extremely excited as an object appeared directly above us. This light grew brighter as it passed overhead, and at the "climax" of the experience, it seemed to produce a bright flash almost directly downward, after which it suddenly dimmed, become faint enough that we could no longer see it.

"Did you see that?" one of them said with excitement. "It signaled to us, and then blinked out completely!" To my group of hopeful UFO-spotters, it was clear that this object had been no star; additionally, the fact that it became very bright at one point seemed to indicate that the object was attempting to communicate with us in some way.

While they were correct that the object had been no star, I found it odd--though slightly charming--that they perceived the change in brightness we observed as being somehow relevant to our little group of observers. To them, it was as though some intelligence greater than us actually had been aware that we were down here watching, and chose to send salutations to our meager little group.

Perhaps my innate cosmicism stems from my appreciation for Lovecraft's writing, which often played down the importance of humanity in the eyes of his fictional alien Elder Gods. After all, why would humanity necessarily be of any importance to alien visitors? Furthermore, if aliens were trying to communicate with us, why would they do so in ways that are so ambiguous as to merely fly overhead and flash their landing lights at us?

Of course, to anyone that has spent enough time outside observing the night sky, the object I've described here was no UFO spaceship at all. It was pretty obviously an iridium satellite, which was reflecting more light from the sun in our direction as its position turned in its orbit while passing overhead. Countless times since then, I have used an app on my iPhone to determine when, almost down to the second, an iridium satellite was going to appear; in many of those instances, the same characteristics involving a buildup to a bright flash was repeated.

As instructive as the story above had been, I also recall with equal vividness the time a colleague of mine argued that there was no benefit to discussing these identifiable flying objects, or "IFOs," for which he presented an unusual kind of logic. "At the end of the day," he said, "this proves nothing, because we aren't talking about actual spaceships!"

To the contrary, I think it is very important to be able to identify the more prosaic things in the night skies. The only thing more important than this would probably be discussing it with others, so that a broader range of observers can become adept at identifying seemingly unusual things they have seen.

A great example was recently sent along to me by a listener of my podcast named Calvin, who gave an excellent description of something he and a group of friends observed recently over Tennessee.

"We were all laying down on blankets looking up at the sky at the campground we were staying at, Calvin said. "We were specifically watching for iridium flares or any other kind of satellites. We saw a few iridium flares over the course of a few hours." 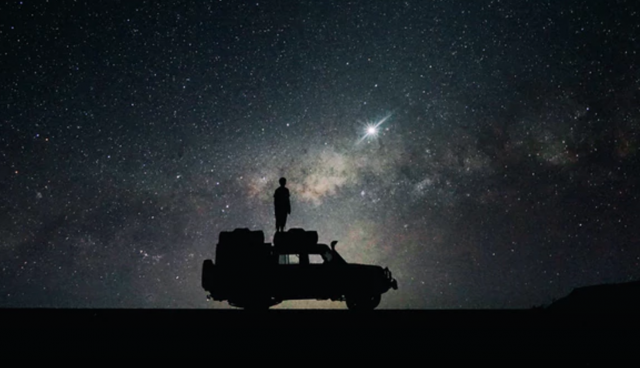 Calvin further described how at one point, a bright flash of light from another part of the sky captured he and his company's attention:

"At one point though we saw an extremely bright flash come from the opposite side of the sky the iridium flares were traveling from. when we looked there was nothing there. But a split second later the object flashed again but not as bright as the first time. we then started to track the object going across the sky and seemingly flashing at random. The flashing didn't seem to be evenly spaced and sometimes it would flash so faint you could barely see it and other times the object would flash so bright nothing else was as bright in the sky. Between the flashes though we would totally lose sight of the thing. Also it was moving extremely slowly compared to the iridium flares i am used to seeing.

Whatever it was it appeared to be in orbit but we have no way of knowing for sure if it was. We were talking about the thing the whole time we had it under sight, which was no less than 15 minutes. We have no clue what the thing was, but we also think from the random flashing and the degree of brightness that maybe it was a tumbling object in space. Maybe some space junk catching the sun’s rays just right or something similar.

While the behavior was similar to what my own sky watching group had observed years ago, Calvin and his company's interpretation of what they saw is similar to my own, in that they believe it was a manmade object in orbit, reflecting light as it tumbled along. "Whatever it was it was weird to us," Calvin told me. "I have never seen anything like it, and I was wondering what you would think about this object as well." Although such objects can, at times, appear a bit out of the ordinary based on their movement, light patterns, etc, my bet would be that Calvin was spot-on when he suggested it was some type of "space junk."

So again, the question may come to mind, "why is any of this important?" In what I consider to be a truly landmark book, Allan Hendry's The UFO Handbook, the author spends almost half the book discussing the various "normal" things that can appear quite out of the ordinary to an observer at night. A favorite of mine had been advertising planes, which often perplexed observers for miles with their illuminated flags advertising everything from restaurants, to legal services. When seen even from a short distance away, these lit-up banners were often interpreted by ground based observers as resembling luminous, dome or saucer-shaped aircraft. In most cases, Hendry was able to make calls to regional FAA authorities, and determine almost precisely which planes were flying in an area at a given time, and hence, identified many such "saucers" as the commercial aircraft they actually were.

As Hendry was intending to help illustrate by focusing on identifying prosaic sources of nighttime UFO reports, a skilled UFO investigator needs to be informed on more than just the potentials relating unidentified aircraft. They must also be able to identify otherwise easily recognizable objects, which may appear differently when seen under unique circumstances.

Even experienced sky watchers may, from time to time, see things that fall outside the ordinary patterns associated with them, whether it be manmade objects in orbit, or even airplanes, as Allan Hendry discussed in The UFO Handbook.

Of course, I in no way mean to assert that all unidentified flying objects have prosaic solutions, and neither did Hendry when he wrote about such scenarios decades ago. But to borrow an absurd (but relative) reference, as G.I. Joe often said, "knowing is half the battle." I do think it's pretty safe to say that this applies to UFOs too, and that for observers who educate themselves on the varieties of the IFO experience, sky watching is not only more fun, but it makes them better at spotting any actual UFOs, as well.

Lost Languages of the Dark Ages Found in Egyptian Monastery