The Little Green Men Days Festival and the Total Eclipse

Do you suspect there might be a connection between UFOs, aliens and total eclipses? If so, the place to find out on August 21st is in Kelly, Kentucky, which will host its annual Kelly Little Green Men Days Festival at the same time as the total eclipse passes directly overhead. Will the Little Green Men of the 1955 Kelly–Hopkinsville encounter return? Do aliens needs special glasses to look at the eclipse? 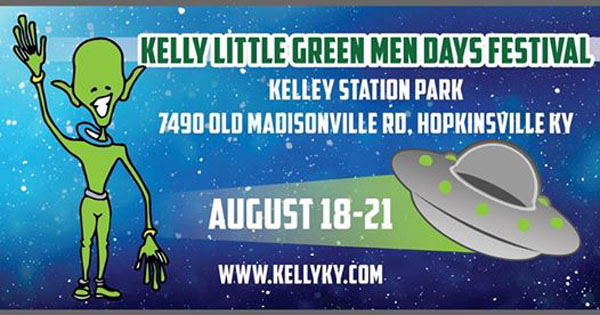 The original Little Green Men Festival was held in 2005 in Hopkinsville, Kentucky, to celebrate the 50th anniversary of the now-famous close encounter described in detail here and briefly on the festival website:

“On the evening of August 21, 1955, five adults and seven children arrived at the Hopkinsville police station claiming that small alien creatures from a spaceship were attacking their Kelly, KY farmhouse and they had been holding them off with gunfire "for nearly four hours". Two of the adults claimed they had been shooting at "twelve to fifteen" short, dark figures who repeatedly popped up at the doorway or peered into the windows.”

The incident was celebrated in a musical by The Annoyance Theatre in Chicago called “It Came from Kentucky” and the so-called Hopkinsville Goblins are also said to have inspired the Pokémon called Sableeye. The festival has now become an annual event in Kelly and features live music, an alien costume contest, speakers, authors and vendors selling all manners of UFO and alien wares. The festival will also host the world premier of the movie, “The Invasion of Kelly.”

And then there’s the total eclipse.

On the exact date of the 62nd anniversary of the Kelly–Hopkinsville incident, full totality will occur for 2 minutes, 40.1 seconds in Hopkinsville, the “point of greatest eclipse” according to the website set up for the event, which describes the totality in totality...

“It will actually take about 3 hours from point of first contact until the eclipse has completely passed over head. Point of first contact (when the moon first begins to move in front of the sun) will be 11:56 a.m. CT, with full totality beginning at 1:24 p.m. and lasting for 2 minutes and 40.1 seconds. The last partial phase of the eclipse will end at 2:51 p.m. CT.”

Unfortunately, the website FAQ page doesn’t address the most important question … what should people do if the little green men return for the eclipse? That may be because local officials don’t want attendees coming prepared for another four hour gun battle (firearms and weapons are prohibited from the event). Or it might be because, other than for a brief time the night of the original incident, the Hopkinsville Goblins or little green men have never returned to Hopkinsville, Kelly or the festival held in their honor.

Is this the year? We’ll soon find out.

Get Ready for a Real Flying DeLorean