The Strange Story of the Amazonian Telegraph

The human race is a remarkably resourceful one. We have found a way to get around all manner of hindrances and calamities, and one wonders just what technological advancements have been lost to time out there in the wilds of our planet, just what innovations we have thought up in the more remote fringes of our world that have been buried in the mists of time. One very curious case is that of a relatively unknown explorer, who came through the unexplored regions of the Amazon and found that they were not the primitives he thought they would be, but rather that they had in a sense a wireless service.

In the annals of great explorers of the uncharted domains of our world, the name James Campbell Besley may not ring a bell for many. Besley was a mostly obscure British hunter and explorer, who was born in London in 1874 and eventually educated at educated at Eton and Oxford, who despite his relatively unknown nature had a rather colorful life. After spending most of his childhood traveling about the British Empire, to such far flung places as Australia and South Africa, he made a small fortune by mining gold in Australia and then the Klondike. He would go on to enlist when the second Boer War broke out in South Africa, getting in adventures, after which he went off across the globe to Sonora province in Mexico to make some more money mining silver and copper. Between all of this he also managed to become a champion polo player, with his team winning the 1913 Pacific Coast Polo Open in Southern California.

While this may seem to be more than a lifetime of accomplishments and adventures for most, Besley was just getting started. He got it into his head to make a bold expedition down to the Amazon rainforests of Peru, departing from New York City to make his way to the jungles of Peru in 1913 to raft nearly 4,000 miles from Lima along it all the way from its source to the Atlantic Ocean over the course of 5 months, and make a myriad of amazing discoveries in the uncharted wilderness along the way. As Besley and his expedition rafted down the Amazon River through remote, unexplored and untamed rainforest, they certainly met with some challenges. Malaria and other horrific tropical diseases were a constant threat, as were the numerous dangerous animals along the way lurking in the thick jungle, as well as aggressive tribes and all of the perils that only an isolated, poorly understood wilderness can provide, yet they were still able to capture the first film footage of the ruins of Machu Picchu, which had been discovered just 2 years prior by a Professor Hiram Bingham of Yale. They were also able to discover other lost Incan cities buried in the overgrown tendrils of the jungles of the Cuzco region.

When Besley returned to New York, he did so with a cache of numerous rare artifacts from the jungle, lost tribes, and even from the decomposed bodies of less successful explorers he had come across sprawled out in the wilderness, along with his prized footage of the journey and of course Machu Picchu, and a monkey he had befriended named Changa, which was allegedly trained by Besley to dutifully call for room service at his hotel. Everything seemed to be going great for Besley, and his astounding journey was widely publicized in the media at the time. Yet sadly, all of the important items he had brought back, as well as his footage, were promptly stolen in New York.

This may have been for most people an insurmountable catastrophe to send them into hopeless despair, but Besley, although no doubt disappointed, simply went and did the whole journey again, re-shooting all of his footage as closely to the original as possible and gathering more relics, including two full mummies. With the shadow of some sort of sinister bad luck seemingly hanging over him, his ship, the Metapan, was almost sunk in New York Harbor after crashing into another vessel, the relics and footage were somehow able to be saved. Two films would be made about the dashing expedition, The Captain Besley Expedition (1914), and In the Amazon Jungles with the Captain Besley Expedition (1915).

Besides all of the groundbreaking new footage and interesting items Besley brought back with him, there was also a rather strange curiosity of a tale that he relayed. He noticed during his expedition that the natives of the Amazon always seemed to know when he was coming, no matter how far or how fast he traveled, which piqued Besley’s curiosity to no end. According to a 1915 book called Artisans and Artifacts of Vanished Races, by Theophilus L. Dickerson, as well as a 1916 article in the publication Wireless World, when Besley inquired as to how the natives so quickly knew of his arrival without ere, the locals explained that the natives of the region had long ago developed a complex system of communicating instantaneously for miles around, essentially a wireless system, of which Becksley himself would would write:

It was in the Juamara region that we first learned of this wireless system. We were met at the entrance of the village by a number of natives. They had evidently been expecting us, and when we asked how they knew that we were coming they pointed to a crude looking arrangement suspended between two tree stumps on a horizontal bar. Through our Indian interpreter we learned that it was a wireless apparatus for sending and receiving messages from the various tribes throughout the Amazon Valley. The transmitter was a hollowed trunk of a tree suspended from the pole so that the base was slightly off the ground. Inside it had been arranged very much like our violins. It was explained that when the instrument was struck smartly with a small rubber hammer a vibration was created that carried for miles over the hills. The receiver is very similar to the transmitter, except that it is placed on a hardwood platform, the base of the hollow tree trunk being grounded on the platform.

When the message is struck in the neighboring village, sometimes 30 miles away, this receiver catches the vibrations, causing a jerky, singing sound. I understand that this sound system can be read by the members of the tribe and that in this way news of victories and other happenings are told throughout the countryside. In this way the Indians all along our route heralded our approach and we were met by the inhabitants all through the Putamayo, Nappo, Beni, Madri de Dios and Lower Eucalaya Valleys, the tributaries to the great Amazon. We learned also from the Maratos and the Haumbaisus tribes that this method of telegraphy has been used by the various tribes in that district for thousands of years. 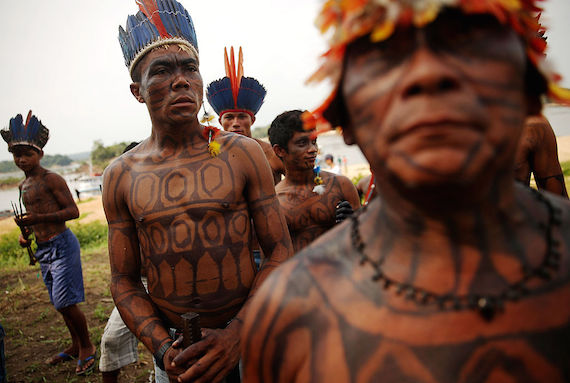 Could this possibly be? Could these "primitive savages" have so cleverly thought out a wireless means of communication thousands of years before the concept first caught on? It is a very curious account to be sure, and sheds light on just how much innovation has gone on throughout the world that we may not even be aware of. Amazonian tribes using wireless tech for thousands of years seem like a pretty fantastic thing, although I'm not sure what their games and apps are like. They are probably not on Apple or Google either. Oh well. Maybe they'll get around to it.

3-Fingered Alien Mummy Total: 20 Plus a Couple of Live Ones