If you were to choose the perfect getaway car (and if you actually think about this, shame on you!), your choice would probably be something very fast, quiet and low to the ground, with darkened windows and night-vision lights to make it somewhat invisible at night. But what about one for those broad daylight Ocean’s 11-style heists? That list of choices probably wouldn’t include a Toyota Corolla … yet. Toyota just filed a patent on a cloaking device that may someday help a slick salesperson change your mind … for a cut of the bounty, of course.

Even the patent for this cloaking device is cloaked. The application for “Apparatuses and methods for making an object appear transparent” describes the purpose of the apparatus as something that will make the window pillars on the front windshield (called the A-pillars) disappear so they no longer block the driver’s vision. These pillars, like cup-holders, seem to get bigger every year, making their potential to cause accidents grow as well. Newer cars are being equipped with cameras and radar to help make drivers more aware of their surroundings, but they’re expensive and often require looking away from the road at a screen, an equally dangerous practice.

Enter the ‘Apparatus for making an object appear transparent’ – you just know there’s a team of people working on a better name for this. The Prius See-Us? The Toyota See-You-Ta? Cloakarolla? Maybe a description from the patent will help: 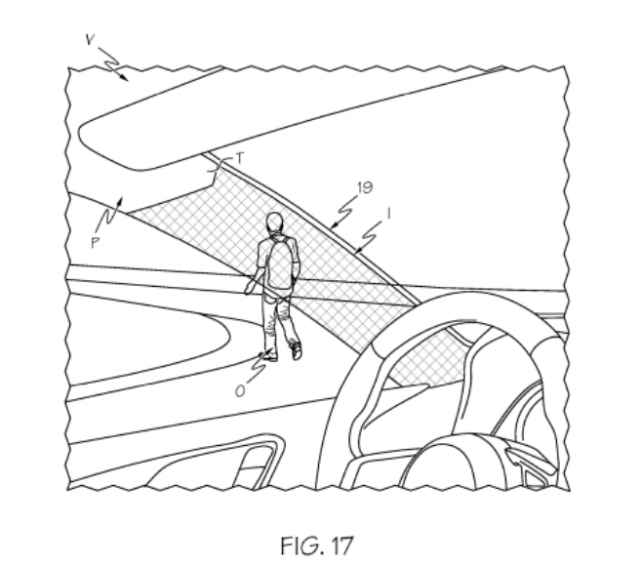 This is why you should never let engineers try to come up with catchy names for what they build Let them stick to what they do best … making cool stuff like cloaking devices. What this device does is use one of a magician’s oldest tools to make things disappear: mirrors. In simplest terms (without giving away an magician secrets like Penn & Teller), the patent is for a material made of tiny mirrors and opaque surfaces that wraps around the pillar. Once in the proper place, it would reflect light around the pillar, making it seem invisible to the driver. The system will have to have enough mirrors at all the right angles to compensate for drivers of different heights and seat positions.

It sounds easy, but if it was, we’d have one already. The real question is: if this works for cloaking a pillar, can it work for cloaking an entire car? The car would have to be completely covered in the cloaking material. That might be easy for the body but what about the tires? Then there’s the matter of the windows. What happens when you cloak something that’s already see-through? If it distorts the window, would the cloaked car driver need a camera to see ahead? Finally, this would be a physical cloak attached to the body, not an electronic one, which means the car would always be transparent. What bank robber wants to run out to the parking lot and try to remember in which space he parked his invisible car?

A Ghostly Airman At Loch Ness?